Bougainville, an autonomous region of Papua New Guinea, is emerging from a period of conflict. Respect and trust for law and order is essential to secure the region's future development and the safety of its people. In 1999, after consultation with local people, the Bougainville Community Policing Project (BCPP) was established in the Autonomous Region of Bougainville to achieve this core objective.

New Zealand Police officers work in advisory positions helping with the recruitment, training and operational management of 350 Community Auxiliary Police (CAP). CAP officers are selected by village chiefs, then undergo formal assessments and attend recruit camps. With 97 percent of the Bougainville population living in rural communities, CAP officers play a vital role in supporting chiefs and village courts. They also provide community awareness education and uphold law and order, which helps to bring peace and harmony to the village areas where they live.

Village community consultation identified that increasing the number of female CAP officers would enable rural women to more easily report offences affecting women and children. As a result, the proportion of female CAP officers has increased from five percent in 2008 to 22 percent in 2013. This highlights the importance of partnerships with communities, which ensure that Police provide services that meet community needs.

New Zealand Police develops the Bougainville Community Policing Project and coordinates implementation across Bougainville. They then withdraw from Bougainville.

For more information about the New Zealand Government's international aid and development programme visit the website of New Zealand Aid.

The Solomon Islands is a country to the east of Papua New Guinea, made up of nearly 1000 islands.

Timor-Leste, formerly known as East Timor, is a country in Southeast Asia just north of Australia.

The Timor-Leste Community Policing Project (TLCPP) is a four-year partnership programme between the New Zealand Police and the Policia Nacionale de Timor-Leste (PNTL). There are four Timor-Leste districts in the TLCPP programme, with further districts being added after the initial districts have worked through the project.

Funded through New Zealand Aid, New Zealand Police is providing mentoring in community policing to the PNTL until 2015. With an in-country staff of two New Zealand Police advisors, ten mentors/advisors deployed to Timor-Leste to mentor district commanders and their deputies for a period of 12 weeks per year, over three trips a year.

PNTL district commanders also travel to New Zealand for a series of briefings, and to their mentor's/advisor's districts to view community policing in action. 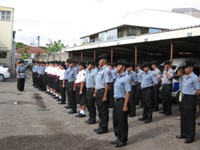 The Tonga Police Development Programme is a partnership between Tonga, Australia and New Zealand, aimed at strengthening the Tonga Police. It started in 2008 with the objective being an effective Tonga Police which has the trust and confidence of the community. Currently New Zealand Police has two long-term advisors seconded to the programme, based in Nuku'alofa full-time. There are also several short-term advisors who provide specialist in-country training and support to Tonga Police.