Facts and myths about speed

Police enforce speed to make roads safer for all New Zealanders. Road crashes inflict a huge amount of pain and suffering on victims. The social cost of motor vehicle injury crashes is more than $3b a year.

Police decisions about speed enforcement are based on evidence. You might feel safe driving a few kilometres over the limit but extensive research from New Zealand and overseas shows small increase in speed raises the crash risk for all road users.

How a “safe system” saves lives

The safe system approach is a proven way to save lives and reduce serious injuries on our roads. It acknowledges that even responsible people sometimes make mistakes. Originally developed in Sweden, it has been applied in New Zealand since 2010 and forms the basis of the government’s Safer Journeys strategy.

A 20 minute documentary, The Difference Between Life and Death, explains how the safe system approach works.

The Difference Between Life and Death - film and resources (You Tube)

Police keep the money from infringements

Police does not retain any of the money from infringements. The money goes to the Government.

Police would be delighted not to have to issue any infringements, as this would show everyone was driving safely and not putting themselves or others at risk. This would see deaths and serious injuries on our roads reduced significantly.

The increased risk of driving a few kilometres over the limit

Police are concerned about:

Thousands of people driving above the limit raises the mean speed (similar to average speed). Although your individual level of risk may be low, the collective risk posed by a large number of people goes up.

Everyone travelling a few kilometres slower makes us all safer. A large and credible body of international research indicates reducing speeds has a direct impact on reducing deaths and injuries. Two studies that are often quoted show:

A review of evidence from speed studies in various countries showed that a decrease of 1km/h in mean traffic speed typically results in a 3% decrease in the incidence of injury crashes, or a decrease of 4-5% for fatal crashes (World Health Organisation).

According to Safer Journeys, if mean speeds on New Zealand’s open roads dropped by 5km/h, an additional 60 lives a year could be saved.

The severity of injuries resulting from a crash is directly related to how fast vehicles were travelling before the crash – even if they were under the speed limit.

When a vehicle crashes, it undergoes a rapid change of speed, but the occupants keep moving at the vehicle’s previous speed until stopped. The faster the speed at which the human body must absorb the energy released in the crash, the greater the severity of the resulting injury.

Your speed also dictates what happens if you hit another vehicle or person.

For example, if a pedestrian steps out in front of you and you take one second to react:

The probability that the pedestrian will die increases rapidly with relatively small increases in speed.

For example, a pedestrian struck by a vehicle:

For a child or an elderly person, the odds are much worse.

Number of crashes in which speed is a factor

Even when speed does not cause the crash, it is the single biggest determinant in whether anyone is killed, injured or walks away unharmed. A small change in speed makes a big difference to injury severity.

What Kiwis say about speeding

Speed reduction is a core component of the Government’s Safer Journeys strategy, launched in 2010. Safer Journeys established a vision for New Zealand of “a safe road system increasingly free of death and serious injury,” and adopted the Safe System approach.  A Safe System recognises that people make mistakes and are vulnerable in a crash. It reduces the price paid for a mistake so crashes don’t result in loss of life or limb.

People from across the transport sector are working on the four components of a Safe System: safe roads and roadsides, safe speeds, safe vehicles and safe road use, including NZ Transport Agency, Ministry of Transport and ACC.

We need to build better roads, not slow people down. 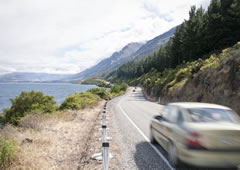 New Zealand’s roads are not as safe as those in other countries. Our road network is comparatively long and much of it was built when vehicles travelled at much lower speeds. Our geography is challenging and our population base is small. This means it is difficult to spend the same amount per kilometre of road as the best-performing countries.

The NZ Transport Agency and local government work together to improve our roads. They target improvements to risk. While there have been some significant improvements in the road network in recent years, much remains to be achieved.

The Safer Journeys strategy adopts the “Safe System” approach. This means looking at the whole roading system, not just the tarmac we drive on. The solution to a problem in one part of the system may lie in another part. So if it’s not practical to improve a road through engineering, maybe the speed limit should be lowered, or more education introduced in that area. One focus is working towards roads and roadsides that are self-explaining, manage conflicts in operating speeds, are forgiving of driver error, and minimise impact forces in the event of a crash.

Police carry out a wide range of activities to discourage and catch people who put themselves and others at risk on the roads. These include:

If dangerous driving is happening or has just happened – call 111.

You need a higher speed threshold to compensate for inaccurate speedos.

Speedometers are far more likely to “over-read” than “under-read”. As they tend to indicate you are travelling slightly faster than you actually are, there’s already an in-built tolerance.

A test by Consumer Magazine in 2010 found many speedometers over-reading by up to 10%.  Both Australian and European Design Rules require a vehicle's true speed must not be higher than the speed indicated by the speedometer.  Changing tyre heights (profiles) may impact on speedometer readings, so drivers are reminded to ensure that the tyre specifications are those set by the vehicle manufacturer.

The road toll has dropped a lot; we should focus on other things now.

New Zealand’s highest recorded road toll was 843 in 1973. Since then the number of deaths has been trending downwards in spite of significant increases in population and traffic volume. Many lives are still needlessly lost every year, and travelling too fast for the conditions remains a contributing factor in about a third of all fatal crashes.

Police firmly believes that one life lost on the roads is one too many.

My new car has safety features that mean I can drive fast and still be safe.

There’s no doubt new car technology is saving lives. However, the New Zealand vehicle fleet is relatively old by world standards, with an average age of around 13.3 years as of December 2013.

Even the best technology won’t stop another car crashing into you, and even if your own car saves your life, you are still at risk of serious injury – as are the occupants of the other car. This, plus our unforgiving terrain, makes it even more critical that we consider all road users and drive no faster than the speed limit.

Police should focus on other risky driving behaviour, like drink driving and driving too slow.

Police activity focuses on the driving behaviours we know are most likely to cause crashes, injuries and deaths.

As well as speed, we focus on:

As part of routine road policing activities, we:

The problem isn’t speeding drivers – the speed limit’s too low in the first place.

A separate project under the Safer Journeys strategy is assessing how current speed limits reflect the use, function and safety of New Zealand roads.