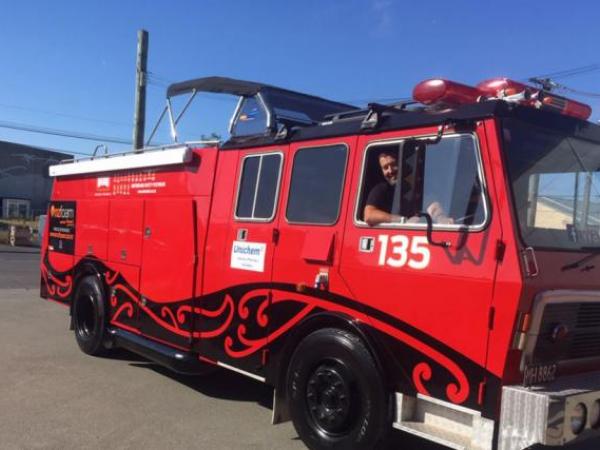 Home > News > Fired up to spoil the kids

Over the next week Canterbury Police Sergeant Dougall Struthers is swapping his patrol car for a beautifully restored fire truck.

Dougall and a group of his mates will be delivering goodies to school children as part of the long-running tour The Trillian Trek.

They’ve been working round the clock to get their 1985 decommissioned Dennis fire engine ready for the roadie, which is partnered with the charity Blue Light.

The truck – named Wai Wakanui – is joining about 30 other vehicles travelling from Mt Ruapehu to Wellington, and back up to Waikato.

The teams give out grants, sports gear, special needs equipment, and a lot of laughs to schools and communities.

“I love this event. This is my nineteenth year of being involved. I’m absolutely blown away by the generosity of people and businesses who’ve donated money and gifts,” says Dougall.

“As well as seeing the smiles of joy on the children’s faces, the adults have so much fun that we end up playing big kids. We’re absolutely wrecked by the end of the week. My wife thinks I need two weeks off to recover.”

Other members of Dougall’s team have also taken leave from their various day jobs, which include a bricky, truck driver, council worker, and a pharmacist.

Some of the convoy’s themed cars, trucks and buses have racked up their share of kilometres on the clock. With certain vehicles prone to breaking down, Royal New Zealand Air Force mechanics are on hand with a mobile pit stop to make repairs.

The journey begins with an opening night at Chateau Hotel Tongariro on Saturday 9 March and the convoy heads to Palmerston North the next day.