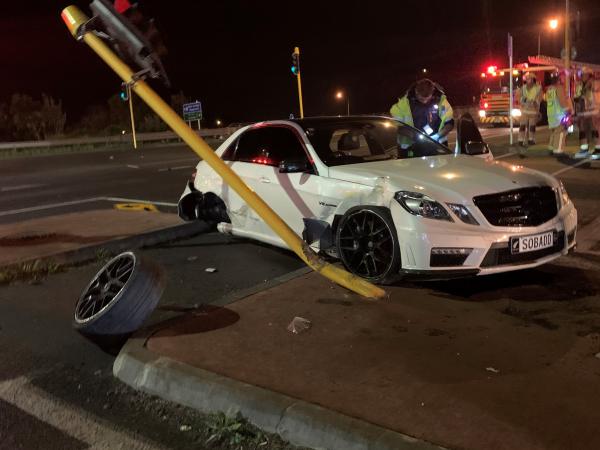 Police investigating a high-speed crash on Auckland’s North Western Motorway are seeking witnesses to the crash itself and the erratic high-speed driving that came before it.

Around 8:25pm yesterday, a white 2011 Mercedes Benz E63, registration SOBADD (pictured), was heading northwest on State Highway 16 between the Lincoln Road on-ramp and Hobsonville Road off-ramp at high speed, reportedly weaving in and out of traffic.

The car took the Hobsonville Road off-ramp at high speed, crashing into the rear of a white sedan, before spinning 360 degrees and colliding with a traffic light at the intersection with Hobsonville Road.

Occupants of the white Mercedes then took off on foot from the crash scene down Hobsonville Road towards Westgate Shopping Centre.

Due to the speed of the collision with the sedan on the off-ramp, it was extremely fortunate that the driver of the sedan escaped injury, although his vehicle was extensively damaged and had to be towed from the scene.

Motorway Patrol staff attended the crash and are asking any witnesses to come forward.

There was a moderate amount of traffic around the Northwestern Motorway and Hobsonville Road at the time of this incident, and Police would urge anyone who saw the crash, or the high speed driving from the Mercedes on the motorway beforehand, to get in touch.