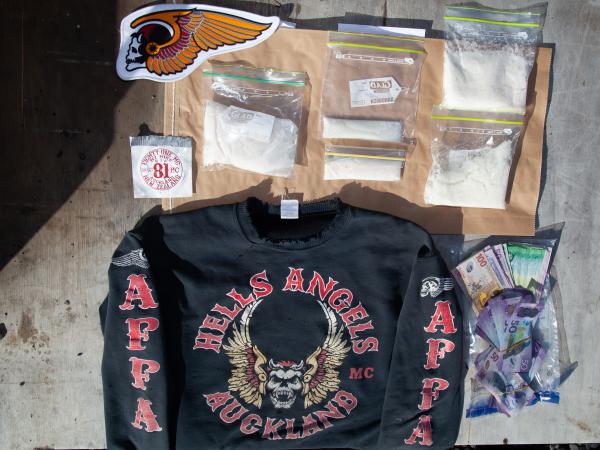 Three people have been arrested and charged with supplying methamphetamine following a number of search warrants conducted by West Coast Police yesterday, 21 May.

This is another blow to organised crime offending on the West Coast, following a series of good results in recent weeks.

Illicit drug dealing often goes hand-in-hand with property offending and weapon possession, all of which causes significant harm to our communities.

Last Friday, 15 May, a 48-year-old Hells Angels Auckland patched gang member was arrested in Kumara. He was in possession of an amount of methamphetamine with an estimated street value of more than $500,000, cash, ammunition, and a pistol.

Seizing this methamphetamine and having it out of circulation will help eliminate significant social harm in our community.

Since late March, West Coast Police have progressed a number of investigations across the region in relation to organised criminal activity, property offending, and methamphetamine supply.

Last week, a 41-year-old man with gang links was arrested in Reefton for possession of cannabis for supply. He was also in possession of a substantial amount of cash at the time of his arrest.

As well, a 36-year-old Westport woman was arrested and charged with both possession of methamphetamine and dealing methamphetamine as well as driving charges, and she is remanded in custody until 30 June.

Also in recent weeks, several Westport locals have been charged with burglary and a number of Greymouth locals charged with receiving, in relation to a spate of commercial burglaries in Westport since late February. Some of these people remain in custody.

We also continue to work closely with our community partners to offer referrals to services to assist in the welfare of those affected by this offending.

Nationally, the COVID-19 pandemic has helped disrupt some of the established channels of methamphetamine supply, and West Coast Police have been working hard continuing to disrupt this supply even further.

We are confident the arrests and seizures we have made have had an impact, and our work in this area will be ongoing.

Our message to those who are struggling with an addiction to methamphetamine – please get help.

Police are working hard to make the drug harder to obtain. The social harm the drug causes in our communities is significant, both as a direct result of methamphetamine use, but also the associated offending it promotes such as property theft.

This operation was greatly assisted by information from members of the public.

We encourage anyone with information on organised crime in their communities to contact Police on 105, or Crimestoppers anonymously on 0800 555 111.

WHERE CAN YOU GO FOR HELP?

Addiction is a health issue and help is available.

If you need support phone Salvation Army coordinator Karin Le Breton on 021 519 469 or walk in at Mackey Street.