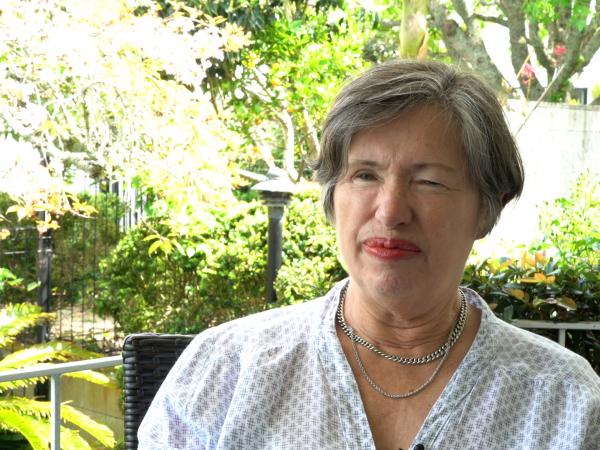 Elizabeth Lind was left fighting for her life after being hit by a fatigued driver while out walking her dogs near her home in Auckland.

Left with a severe brain injury and bones doctors described as being broken so badly they resembled rubble, Elizabeth was lucky to survive.

The 65-year-old spent over two weeks in critical care in hospital, and over three months in rehabilitation learning how to walk and talk again.

Now - after a three-year recovery - Elizabeth is sharing her story in a bid to make people realise the consequences of driving tired.

Ultimately, she says she wants to prevent others from going through what she’s been through.

“If I’m tired, I don’t drive, I don’t want to drive. There’s no way I’m going to get behind the wheel if I’m tired, because I know the damage that can be done,” she says.

“I’m still dealing with all of it. It strikes me every day, and I know that I’m a different person because of it,” she says.

She was out walking her two dogs on Tamaki Drive, St Heliers, when she was struck by a fatigued driver, who is understood to have fallen asleep at the wheel.

The vehicle also hit and killed her beloved dog named Monkey, and her other dog Cocoa was injured.

Police charged the driver with careless driving causing injury. He was discharged without conviction and ordered to pay reparations.

Road Policing Manager for Tāmaki Makaurau Inspector John Thornley says driver fatigue continues to be a factor in fatal and serious injury crashes on our roads every year.

In 2019 alone, 17 people lost their lives in crashes where fatigue was a factor. Fatigue was also a factor in 85 serious injury crashes that year.

“If you and your family are heading away this Easter weekend and are travelling for some time, make sure you take regular breaks and share the driving when you can to help keep yourself and others safe,” Inspector Thornley says.

“Driving tired can be just as dangerous as driving drunk, so it’s important you drive fresh and stay alert when you’re behind the wheel.”

“If you’re feeling sleepy just don't risk it. Organise another way to get to your destination, take a break or share your driving. You might just help prevent the trauma that Elizabeth and her family have been through.”

Inspector Thornley says Police are also reminding people not to drive impaired or under the influence of drugs or alcohol, to reduce their speed and avoid distractions such as cell phones.

“We want to make sure everyone is driving safely and gets to their destination safely this long weekend.”

If you see or suspect someone who may be driving fatigued, under the influence of drugs or alcohol or driving in a dangerous manner contact *555 or 111 as soon as it is safe to do so – you could just save someone’s life.

Media note: The video of Elizabeth’s story is also being shared on the New Zealand Police and Auckland City District Police Facebook pages.