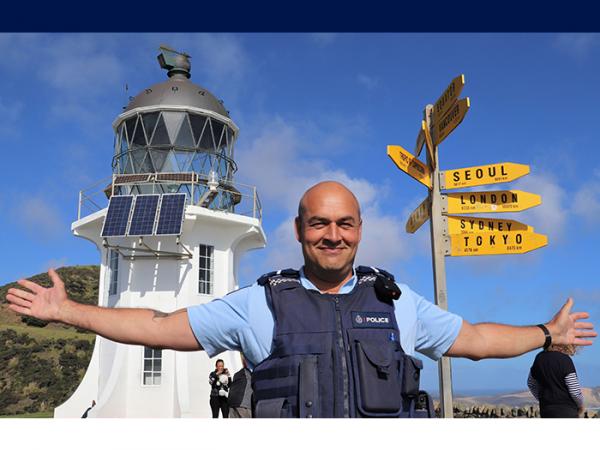 Home > News > Ten One Magazine > On the beat with Smiley

Saltwater sprays off the tyres as the 4WD police truck heads north along the white sandy expanse of 90 Mile Beach. Gulls ride the wind as waves surge up the sand.

Senior Constable Leon Shepherd expertly steers around the edge of the foaming water and avoids the soft sand at the base of the dunes.

He’s known as Smiley to his mates and it doesn’t take long to discover why. Get him talking about his passions for policing - and fishing - and a beaming smile spreads across his face.

“I enjoy doing my job with the community rather than policing by myself,” he says.

“And the fishing right on the doorstep is amazing.”

Leon works out of New Zealand’s most northerly police station - Houhora, 70km south of Cape Rēinga. It’s nestled in the heart of the seaside community, up the road from the fishing wharf and 50 metres from the local café, Four Square and bottle shop.

Leon has Aopöuri and Ngatï Kuri iwi links that connect him to the Far North whenua.

He was born in Kaitaia, his mum comes from Te Kau, and they spent holidays camping with whānau at the Bluff on 90 Mile Beach.

Pre-COVID, during the busy summer, he had the help of his sister, Senior Constable Gail Shepherd, sole-charge officer at Kohukohu.

“There are up to 20 buses a day going along the beach. And on the stretch of road to the Cape there can be a queue that tails back about 4km.

“It’s cool to have us both working in the area we grew up in.” 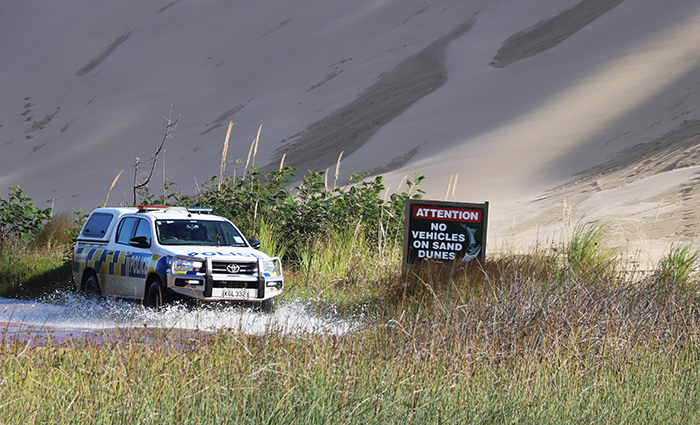 The Far North's stunning coastline presents its own policing challenges.

Far North policing couldn’t be any more different to policing in the big cities.

Wild horses graze the dunes, stranded turtles occasionally need rescuing, there are people trying to illegally take a feed of toheroa shellfish and tension among those collecting mussel spat.

While Leon is an expert on beach driving, where road rules apply, others frequently come to grief. Calls for help from motorists stuck in soft sand are left to the professional towies.

Leon says during the summer there are lots of callouts about speed and poor driving.

“The washouts on the beach cause a lot of our problems, especially when they hit them at 100kmh. We do lose a few vehicles in the tide as some people don’t know about incoming tides.

“I’ve come across kids lying on the roof of vehicles driving down the gravel roads to the beaches and people doing 80kmh down the beach with kids on the roof their cars.

“Driving on the beach you can hit a soft spot and the kids go flying off. We’ve had a few fatals with cars rolling over and then people not watching out for pedestrians.”

It can take all day to sort out crashes north of Te Paki, with organising tow trucks and getting travellers back to Kaitaia.

Back on the beach, when tempers flare during mussel spat season Leon is there to quell the tension.

About 90 percent of New Zealand’s mussel spat is harvested here and it’s a competitive business.

“It also causes a bit of havoc for our iwi who don’t like them driving machinery into the ocean. Now they’ve come to an agreement and everyone is OK.”

The big issue on the beach is the taking of toheroa. “It’s illegal to take – there’s a total ban - but we’ve had a bit of problem with locals and outsiders coming up and filling up buckets.

"I’ve been working with Fisheries, doing stings in the sand dunes.”

Building connections with other agencies is crucial.

“When you work in the city you don’t get the opportunity to work with the other agencies like Fisheries and Customs. I work with them quite closely, gathering evidence and then I leave them to do the prosecutions side.”

He also works with iwi to get Fisheries officers authorised to go on to Māori land.

“I’ve had an incident when the packhorse crayfish were running. A heap of crayfish was dumped before the divers went through a checkpoint.”

Leon discovered the discarded kaimoana and has worked with iwi for MPI staff to gain access to land.

“Having a healthy fishery benefits everyone. It’s something everyone has to look out for up here because once it’s gone it’s gone, aye.”

Leon has worked alongside Fire and Emergency, St John and local health clinics and doctors.

“The other day we had a car crash and the ambulance had to come from Mangōnui. So I called the local health clinic and got a couple of nurses and a doctor. They jumped in the car and came to the crash scene.

“That’s just the way the community works, and they’re all keen to help out.” 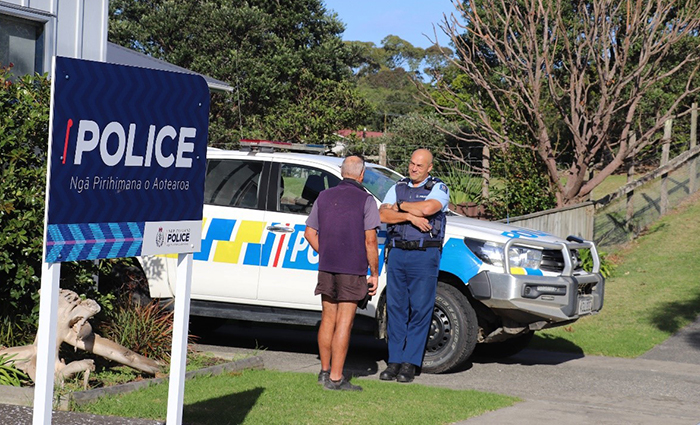 Meanwhile, back at the station...

As a sole-charge officer, his problem-solving skills are sought by locals and visitors alike.

Cattle rustling is a problem but is tricky to police - sometimes thefts can be ‘in-house’ because people have a link to the whenua and think they can help themselves to what’s growing on it.

Not wearing seatbelts and drink-driving are also issues. “Every now and again we have the highway guys coming up here and their visibility helps deter.”

Recently there was an issue with a pack of feral dogs killing stock and attacking walkers on popular hiking tracks. The tracks were closed and DoC have been involved with shooting the dogs.

There is no typical day policing this beat.

“Some days can be nice and quiet and I can do enquiries or patrol all day. But other days can be car crashes, family harm, through to land disputes and iwi issues.”

Off the beach and on to SH1, Leon pulls over in a rest area. It offers excellent views towards the Cape and across to Cape Maria van Diemen. Out to sea, massive waves crash over Pandora Reef.

Pointing towards Te Werahi Beach, Leon says the golden rolling sand dunes are the site of battle grounds and pa. Finding human remains is another part of the job.

“We still get full skeletons that are uncovered. All the tracks through there had to be closed after people started coming here and hunting for the skulls.

“Normally I’ll go in and confirm they’re not recent. There are still one or two people who have gone missing over the years and haven’t been found. I’ll borrow a quad and go out and take a kaumātua or an elder to bless them. Then we put them in kete and bury them.

“I find it interesting and we do it in a manner that respects them. For me it’s about covering off that it’s not a missing person.” 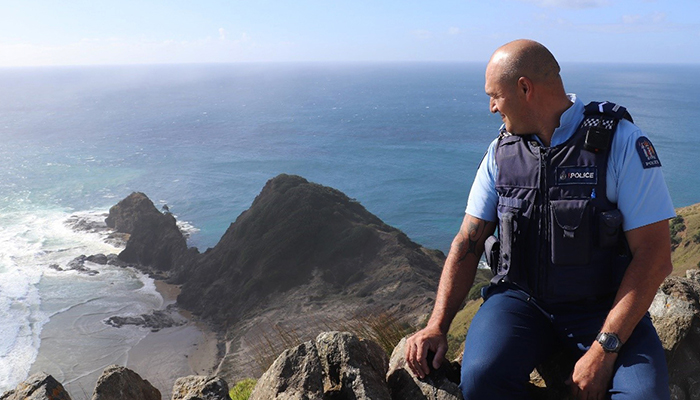 From the car park it’s an easy walk down to the iconic Cape Rēinga lighthouse but a slightly different story on way back up.

According to belief, after death all Māori spirits travel up the coast and to the pōhutukawa on the headland of Te Rerenga Wairua.

They descend into the underworld (Rēinga) by sliding down a root into the sea. They then travel underwater to the Three Kings Islands, ascend Ohaua - the highest point of the islands - and bid a last farewell before returning to the ancestral homeland Hawaiiki-A-Nui.

Sitting on the rock wall overlooking the point, Leon takes a moment, looking toward the lighthouse, famous signpost and out to sea. “Not a bad office, aye,” he beams. He’s not wrong. 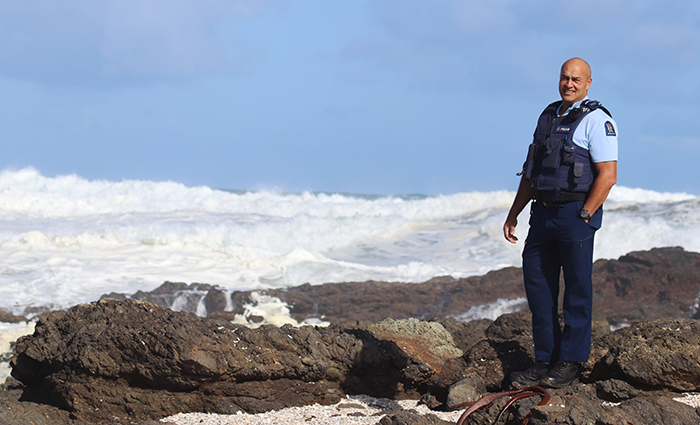