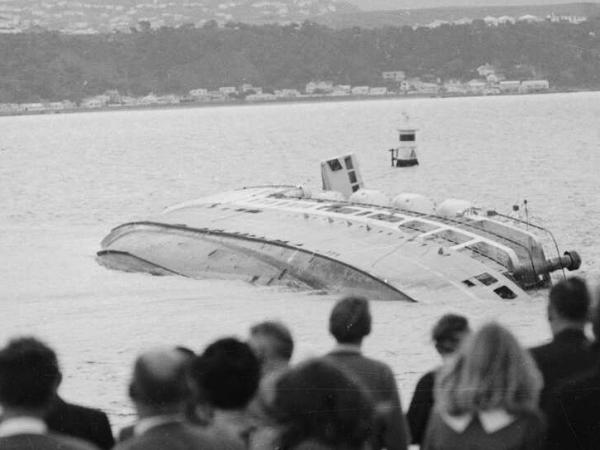 Home > News > Ten One Magazine > BEYOND PRAISE: Remembering the Wahine

Fifty years ago next week, Wellington was assaulted by the most violent storm on record.

At around 6.40am on 10 April 1968, huge waves and 100-plus knot winds created by the collision of Cyclone Giselle and a southerly storm drove the inter-island ferry TEV Wahine on to Barrett Reef at the mouth of Wellington Harbour.

A slow-motion tragedy played out over seven hours, within sight of land, as the Wahine dragged her anchors before running aground off Seatoun and capsizing.

At around 1.20pm the order was given to abandon ship. By 5pm 51 people had died, and two more died later from injuries received, one 22 years later.

The rescue and recovery operation absorbed more than half of the Police staff available in the district and threw raw recruits and teenage cadets into a tragedy beyond their imagination.

The Court of Inquiry later commented that “the work done by the police on this day was almost beyond praise”.

Over the next four days Ten One will recount the stories of some of those involved.

These reports are dedicated to the memory of the 53 people who died and to all those who went to such extraordinary lengths to prevent the toll being higher.

THE impact threw Detective Tata Parata off his feet and across the Wahine’s upper lounge.

As he lay among upturned furniture, he first thought a large truck had been toppled on the vehicle deck by the ferry’s rolling. He got up and through the window saw crew members wearing lifejackets - and wondered how the waves were breaking on windows so high on the ship.

Tata was returning to Wellington from a court case in Christchurch with CIB colleagues Detective Sergeant Dave McEwen and Detective Eric Stretton.

He was the only one of the contingent up and about as the ship approached Wellington Heads.

He was born and raised in Eastbourne so was familiar with the harbour’s geography. With family in Canterbury, he had made the inter-island crossing many times,

“The weather was quite calm but as we ventured into the harbour it got very rough.

“I wasn’t worried about the rolling. Then I felt a bang which vibrated the whole ship and swept me across the lounge floor.”

Passengers were called to an assembly point, lifejacketed but calm. Information was sparse but their transistor radios gave them the news that they had hit Barrett Reef. Still there seemed to be no cause for alarm.

AS SENIOR Sergeant Bryan Courtney began work at Lower Hutt Police Station at 7am, news was breaking of the Wahine’s plight.

“It was a very wild day, stormy, very windy,” he says. “The first thing I did when I got to the station was ring home and tell my wife not to send the kids to school. It built up from there.”

Given the ferry’s position in the harbour mouth, Bryan needed to know the condition of the Pencarrow coast road – narrow, remote and little used but the most likely spot on the eastern shore where passengers would come ashore.

He sent Sergeant Pat Keppel, who was on the early shift investigating storm damage in Maungaraki. Pat was a former Telegraph and Post employee who had worked along the Pencarrow road in all conditions.

In Eastbourne Pat picked up local Constable Len Satherley and they headed to Burdan’s Gate, southern extent of the sealed road. The track beyond was strewn with debris but appeared passable for vehicles.

The message came that the Wahine was safe and Pat and Len returned to Lower Hutt. At 9am they joined Bryan in a meeting to discuss the situation with Chief Inspector George Twentyman and other senior staff.

The storm was reaching its peak and Bryan sent Pat back to Eastbourne, with Inspector Mick Quirke and Len Satherley. They got as far as York Bay, on the Eastbourne Road.

“The road was flooded – waves were washing right over it, bringing in all sorts of debris, even yachts. We just couldn’t go on.” They were eventually picked up by an Army truck and were able to continue.

In Eastbourne Len Satherley was tasked with contacting the local RSA, schools and other institutions to warn them their premises might be needed for passengers.

Police were already at full stretch, quite apart from the Wahine. “The storm was a job in itself,” says Pat.

At Lower Hutt the call went out for all off-duty staff to report – no easy task with telephone lines down and power out. Pat’s wife Chris, a typist, was pressed into service on the switchboard when an operator was unable to get to work.

Bryan made contact with the Army, Hutt Hospital and others to ensure plans were in place.

Dog handler Constable Tom Penrose was dispatched in his dog van to Trentham to ask the Commandant of the Police Training School to make the 122 staff, recruits and cadets there available for the storm response if required.

“The trip took quite a bit longer than normal, dodging sheets of roofing iron, flying debris and slips,” says Tom.

THE storm was savaging the Wellington region. Tragedy had already struck when an eight-year-old girl in the suburb of Northland was killed in her bedroom by flying roofing iron.

All 22 telephone lines into Wellington Central Police Station were constantly jammed. Damage was huge and widespread. Particularly hard-hit was the hilltop suburb of Kingston, where homes were demolished by the raging southerly.

With the Wahine potentially in trouble, mid-morning he directed a Sergeant to open up the city’s new mortuary. “I estimated at that time that we could have up to 100 casualties,” he says.

With communications at best stretched, and at worst disabled, stations were getting on with the job in hand with little or no oversight from District or national level.

Staff were sent to Seatoun and to the pilot station at Beacon Hill, with a portable radio, to keep an eye on the ferry from soon after she hit the reef.

“We knew what was going on but didn’t realise that no one else did as the phone lines were down and the power was off,” says Peter. “We were operating our station radio on a car battery.”

Around the city, off-duty staff were coming in to help. Launch Master Constable John Bowman and other members of the Wharf Police and the new Wellington Police Dive Team reported for duty, despite a number having been up late for their dive team colleague Detective Paddy Doyle’s stag night. The harbourmaster did not want any more vessels on the raging waves, including the Police launch Lady Liz. They stayed put, waiting for their opportunity to help.

AT TARANAKI Street, Sergeant Owen Jacobson reported for duty many hours before his late shift was due to start.

He had been picked up early from his home in Porirua by colleagues. “They told me ‘the Wahine is in trouble, and so is your house’,” he says.

Owen was ten days away from moving into his newly built house - in Kingston. “I managed to visit it a couple of times during the day,” he says. “First time the roof was off; later the house was blown right across the road and destroyed.”

He was tasked with patrolling the south coast. “A number of Army vehicles had been called out,” he says. “I got into one and we went round the south coast looking for people in trouble and vehicles in trouble.

“When we came to Lyall Bay we found an ambulance lying on its side. You could see the bare metal – the sand had blasted the paint off it.

“The crew was still inside. We got them out and into the truck and they became part of our contingent.”

DESPITE the terrible conditions, word from the Wahine during the morning was that she was safe - despite having no power - and was expected to ride out the storm at anchor.

However, planning went on for a possible evacuation, in which event the lifeboats were expected to bring the passengers and crew the short distance to Seatoun. There was no shortage of boaties and other volunteers standing by to help.

Owen was sent with a team of constables to Seatoun, where the Army camp at Fort Dorset was being prepared to receive passengers. From there they could see the ship’s struggle with the storm, so close to land. They did not like the look of it.

Conditions at Fort Dorset were so wild that Army vehicles had been blown to one end of the parade ground. People had to crawl on all fours to avoid being swept off their feet.

At around midday, the harbourmaster asked the Wharf Police for two strong swimmers to help transport fire brigade pumps out to the Wahine aboard the pilot vessel Arahina. John Bowman and Constable Paul Doggett put their hands up.

“I don’t know why, but I decided to put my wetsuit on,” says John. “It was the best decision I could have made.”

By now the storm was abating slightly as its eye neared Wellington. The Trentham contingent were stood down and returned to thinking about the forthcoming Easter break – many from the Mainland had tickets for the following day’s sailing on the Wahine.

The Arahina was heading out to the ship when, at 1.15pm, on the Eastbourne side, Pat Keppel was told the ferry was safe and to return to Lower Hutt.

ABOARD the Wahine, the atmosphere had remained calm during the morning. “Everybody was very placid in terms of what had happened,” says Tata Parata. “We just sat.

However, the situation was about to change dramatically. The ship had started to list noticeably at around 1pm, rendered unstable by water flooding in through gashes in her hull, and the list was increasing.

“All of a sudden we had the announcement: Abandon ship,” says Tata.

“There had been no warning up to that stage that we going to abandon ship. Then it was repeated and everyone went to the lower side to get on to the lifeboats.

“Others were a bit slow so ended up going to the higher part. There was no panic then either.”

Tata was too late for the lifeboats so went to the higher side. From the railing he could see about 50 people in the water in lifejackets, being swept towards the Eastbourne side.

He did not know where his Police colleagues were. Putting his faith in his lifejacket and his familiarity with the shoreline where he and his father used to collect seafood, Tata jumped.