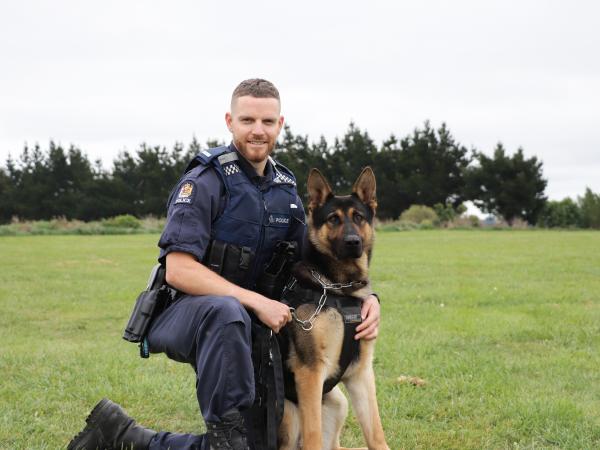 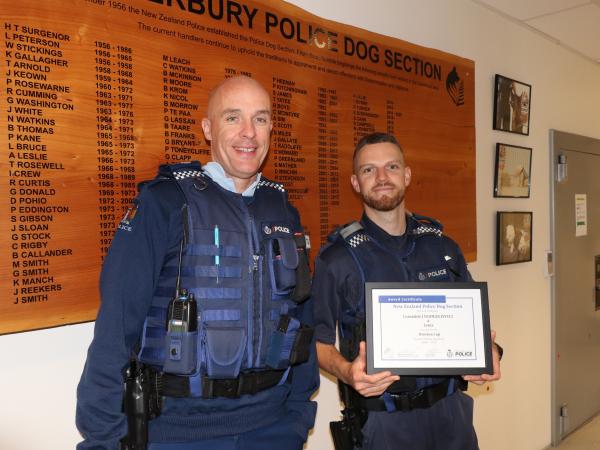 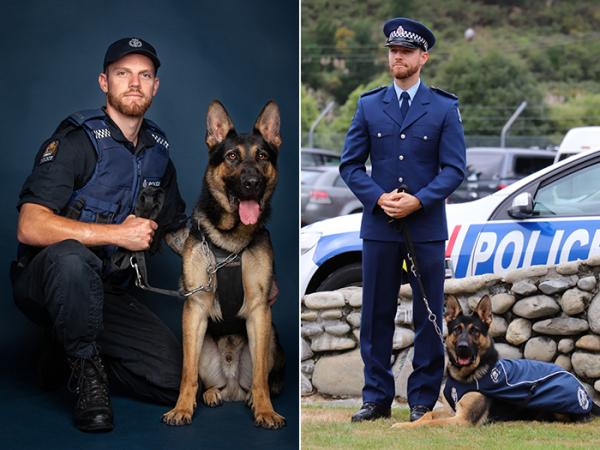 It's been an eventful month for one of Canterbury’s newest dog teams, Constable Josh Yeoman and Lenix, who were recently awarded the Overton Cup for top trainee dog team.

Following a serious family harm incident this week, two-year-old Lenix successfully apprehended a 35-year-old man but was hit on the nose with a hammer for his efforts. His handler Josh also received a punch to the face.

“It was Lenix’s first bite and he did really well given the circumstances,” says Josh. “He’s been checked by the vet and thankfully there are no fractures. He’s feeling a bit sorry for himself, but he’s coming right.”

Just two weeks prior, Josh and Lenix were voted top trainee dog team for the year, an award that no one was surprised to see go to the dedicated pair.

Introduced in 1972 and named after Chief Superintendent J W Overton, the Overton Cup is voted for by instructors and support staff at the Dog Training Centre for the team that displays great skills in training and lives the Police values.

“Every interaction they had with the team here was positive. Josh respected everyone and was always fully engaged – he was a standout.

“His parents came up for graduation, and it’s true the apple doesn’t fall too far from the tree.”

Josh’s dad is a helicopter pilot and both parents do a lot of aid work overseas. Josh was born in Cameroon and spent the first five years of his life living across Africa in Cameroon, Ethiopia and Kenya, where the family always had German Shepherds as pets and as guard dogs.

Josh is also a self-confessed ‘skid biter’ (someone who loves to hang around helicopters). He says watching his dad train with Special Tactics Group (STG), winching dogs, is why he joined Police.

“I had one goal in mind when I joined – to become a dog handler,” Josh says. “I spent most of my days off at Dog Section – helping with training days, being a decoy, laying tracks, cleaning kennels and generally just annoying the handlers.”

His persistence paid off. After just two-and-a-half years with Police, Josh landed his dream job as a dog handler.

When they're training, Lenix only has eyes for Josh.

“I started with my foster pup but he had to go back into the foster programme due to health issues. When I got Lenix, we had some work to do but we bonded pretty quickly. The difference between dogs was night and day. We graduated in March when Lenix was 20 months old.

“We’re a great team,” Josh says. “There’s no conflict – he’s happy to work for me and he’s got a lot of drive.

“He also has a great ability to switch on and off. He loves home and loves my wife – he’s like a cat with her, smooching up to her legs, but when he sees me in my overalls he knows it’s time to work.

“It’s really reassuring for my family,” Josh explains. “They trust him and they know he’s got my back. It’s not always an easy job but I’m really fortunate to have such great support at home.”

This is the third consecutive year the Overton Cup has gone to Canterbury, with Constables Sam Campbell (joint winner with Josh Van Der Kwaakand) and Justin (Judd) Robbins winning in 2019 and 2020 respectively.

“There’s a wealth of knowledge among the Canterbury handlers,” says Josh. “Everyone is really supportive, and they all want the best out of the dogs so they’re always willing to help.

“A big shout out to Sergeant Tim Yates and the boys I trained with every day, Simi Volavola and Michael Lamb. We got our jobs at the same time and trained our dogs together. I wouldn’t have had half the success if it wasn’t for them.

“It’s a long road training a dog and we spent over a year together negotiating that rigmarole to achieve what we did.”