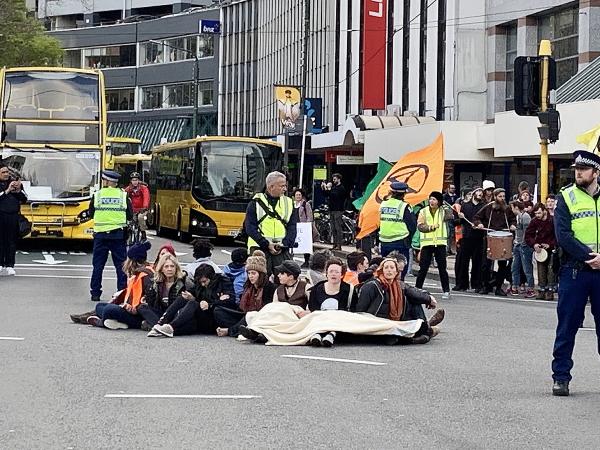 It’s pretty rare for Police to get praise from a protestor, but the staff response to the recent Extinction Rebellion climate protests in Wellington encouraged some of the demonstrators to do so in writing.

After the protest, one participant 'Samantha' took to the praise section of the Police website to provide effusive feedback: “Big respect and love for the team of officers that were with us throughout the day of the Extinction Rebellion non-violent direct action events.

“You gave us space to make our message clear in creative ways… We are grateful for your kind, peaceful, and respectful treatment of everyone, including those of us arrested. We do not take this for granted in a world where police brutality to protesters is more the norm.”‘

Another protester wrote: “I never thought I’d be saying this from previous experiences I have had at protests... but the police overseeing this protest went above and beyond my wildest imagination which left me in a state of shock for the whole next day.

“Unbelievably professional and deserves all the praise possible... it made me proud to be a Kiwi… a massive thankyou to the NZ Police - I have never before been so proud of the work you do…”

“This alone is a significant trust and confidence boost for the organisation,” he says.

“It speaks volumes for the way in which our people planned, led and managed the event – under the control of Inspector Wade Jennings, Wellington Area Prevention Manager.”

While the protest action caused some disruption to the city throughout the day, these were not significant and the CBD remained open and flowing. Around 70 Police staff were involved.

Wade says Intel did a fantastic job before the day, identifying risks and engaging with the organisers.

“It was a long day for staff to be out and about and, for 11 of them, it was their first shift out of College. It was the patience and professionalism of all staff that really made this day a success for us.”

A small number of protesters chose that their day would end with arrest and, despite their fellow protesters and Police negotiating with them, 36 people were removed from an intersection during early evening peak traffic. All were released without charge.

They were able to deploy around the city streets in rapid response to where protest activity was converging. The protesters were very receptive to the officers’ use of bikes - cheering when they cycled into view and passing positive comment - as were the general public.

“It’s always a fine line for Police to manage protests as there are heightened emotions from all sides,” she wrote in a message to district staff.

“The patience and professionalism displayed by our people was testament to the way we want to represent our role within the community as peace keepers and maintaining safety for all. Well done and thanks to you and your teams.”