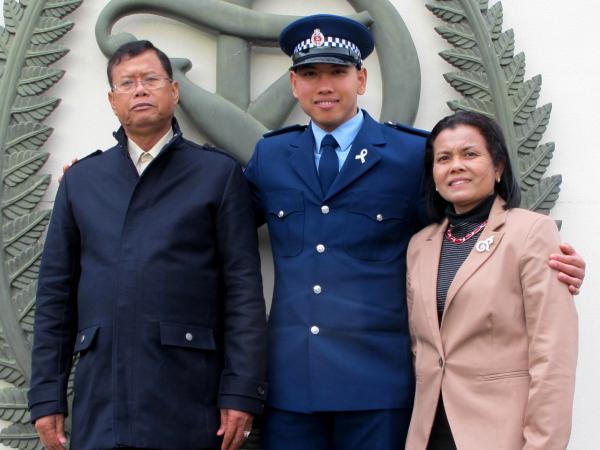 Home > News > Ten One Magazine > Cooking up a new career

New Constable Suppawit Jaroensuk swapped the heat of a café kitchen for the front line as he finished his initial training at the Royal New Zealand Police College (RNZPC) this week.

Originally from Thailand, Suppawit trained as a chef in New Zealand and has been cooking professionally, reaching the level of head chef – but that passion gave way to his dream of joining the Police.

He considered joining the police in Thailand but, after arriving in New Zealand about eight years ago to help look after his sister who was studying in Hamilton, his thoughts turned to joining New Zealand Police.

He was in his late teens at that time and decided to gain a qualification and experience in the workforce.

At the age of 20, his hard work and leadership skills saw him promoted to a head chef role. But when he became a New Zealand resident, and with more life experience behind him, he applied to join Police.

“I joined the New Zealand Police because of their commitment to their values, especially integrity,” he says.

“I have seen a lot of corruption and nepotism in Thailand and the problems they cause. I respect the New Zealand Police as one of the best police organisations in the world and I want to be part of helping to keep our communities safe.”

Making Thursday’s Attestation parade even more special was a visit from his parents and other family members, who travelled from Thailand to be there. Suppawit has been posted to Auckland City District.

He was one of 59 new Constables attested this week.