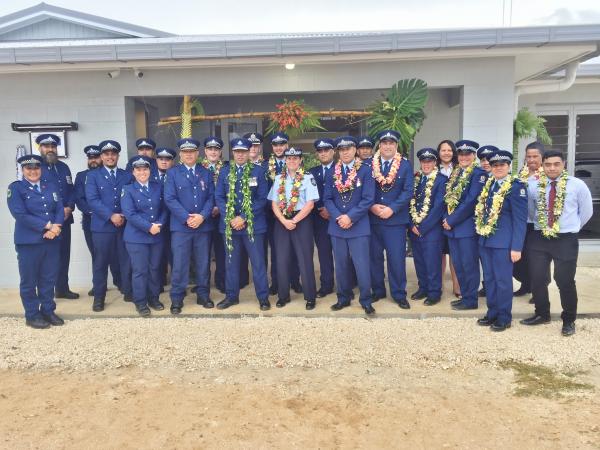 Home > News > Ten One Magazine > Cultural diplomacy on The Rock

There was much to celebrate when Police staff members with ties to Niue travelled to the island last month for the opening of a new emergency operations centre for Niue Police and the National Disaster Management Office.

The group of 12 from the Niue Internal Support Network (NISN), including family members, fund-raised for a couple of years for the trip, which coincided with the 45th anniversary of the Niue constitution. For some it was their first visit to the ancestral homeland.

Detective Sergeant Dean Patutama, who set up the group four years ago to support Niuean staff and families in their professional and personal lives, says there are now about 25 active members among the 50 who belong.

His mother is Niuean and, although he grew up here and regards New Zealand as home, so is Niue. He’s visited several times and, while he doesn’t speak the language, he and the rest of the network learned enough to enable them to perform when there.

They met weekly from July, learning and practising action songs and hymns. Dean gives special mention to cultural leaders in Police and in the community for their cultural guidance and for composing a Niuean takalo (war dance) for the group.

Inspector Chris McLellan was the senior officer in the group. “It was an opportunity for New Zealand-based Police to come together to celebrate where we came from,” says Chris, whose grandmother was Niuean. “It was my first visit, which made it even more special.”

They spoke, they sang, they went to church on Sunday and they spent time with local Police and their families. And not only did they self-fund, they also gave a koha to local Police, the new centre and the local church.

“We were hosted with such generosity and respect,” Chris says.

Many locals commented on the respectfulness Chris showed when speaking at the ceremony, explaining his family connection and telling the story and meaning behind the group’s gift of an aged kauri bowl. Titled U-ki-te-tika, meaning justice, it was carved by a master craftsman in Kaikohe.

The contingent sang in support, and sang (in Niuean) again later when invited to take part in the island’s biggest event, National Show Day, at which each village performs Niuean cultural items. They performed two items, pulling a large crowd and good feedback, Aaron said.

“Chris and the NZP Niue Contingent have only enhanced the established relationship with Niue Police and the Niue community,” he said. “It’s only fair to highlight their good work as it makes my job easier."

Meanwhile it’s back to thinking about fund-raising again. Dean says the group is keen to go back in 2024, when Niue celebrates its Constitution’s 50th.