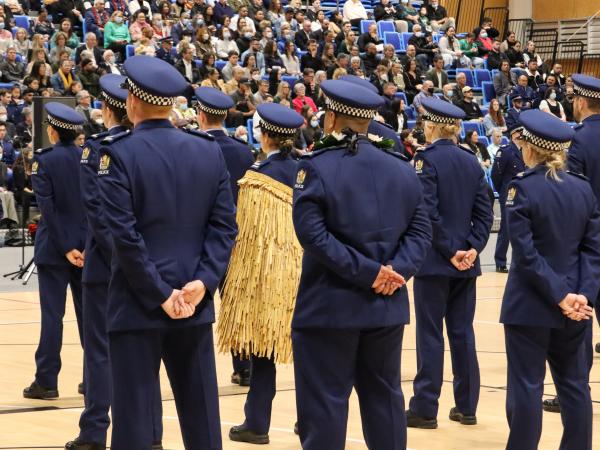 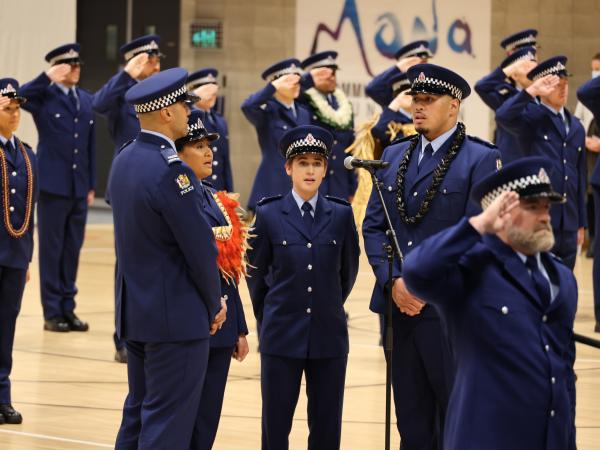 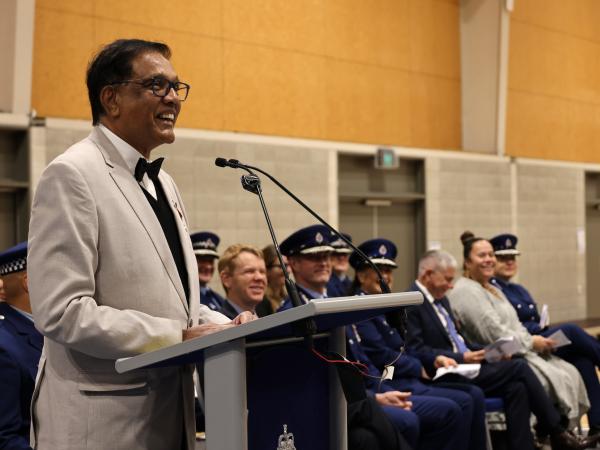 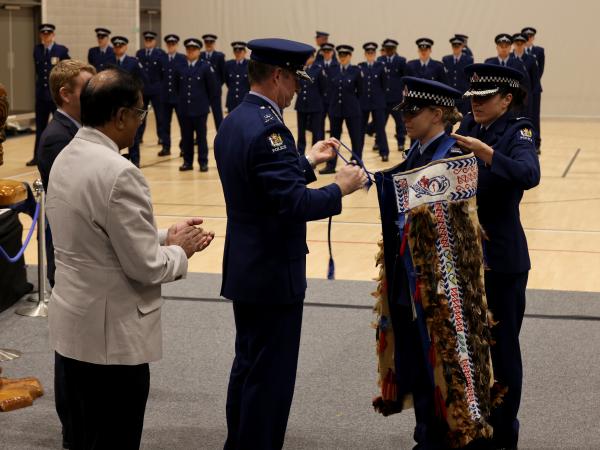 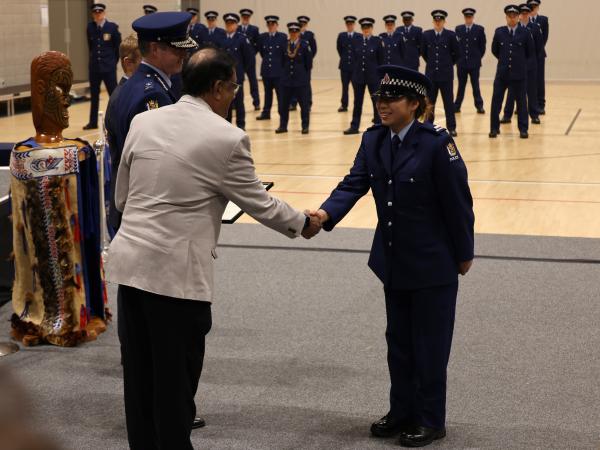 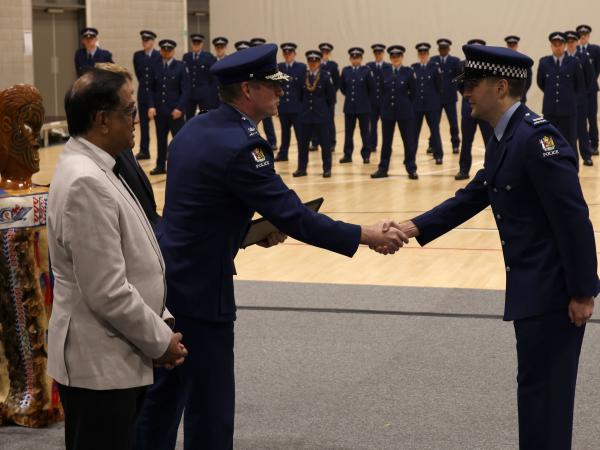 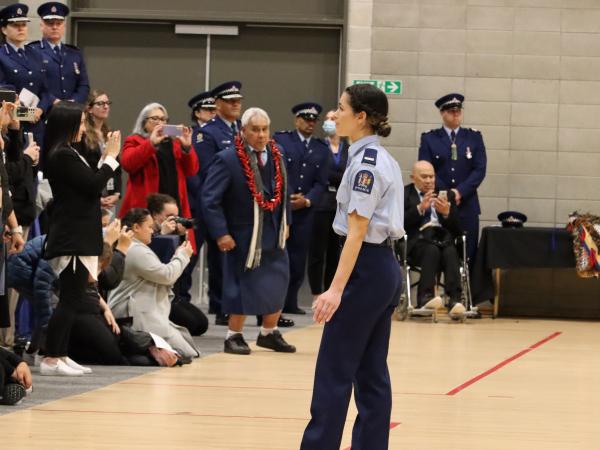 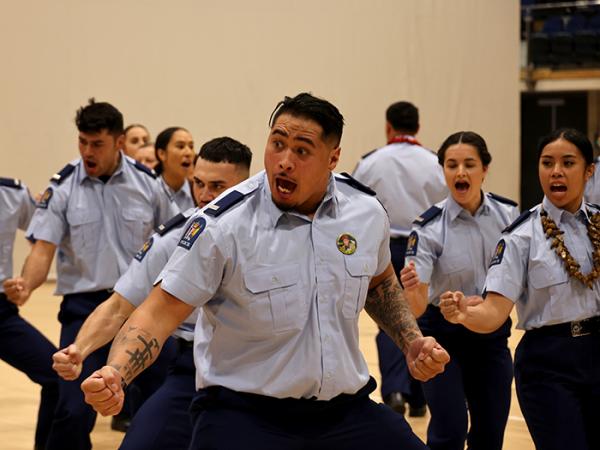 Home > News > Ten One Magazine > A family in blue

Together as a family in blue, the 76 new constables of Wing 356 graduated in a ceremony that was emotional and joyful, rounded off with a stunning haka from the graduates and one given to them in return.

“Brothers and sisters, constables one and all,” is how Leadership Award winner Constable Scott Loper described his fellow wing members in his speech at the ceremony.

“It’s our shared vision of serving our communities, keeping them safe and making for a brighter tomorrow which now binds us together as family in blue.”

Proud to be a third-generation police officer, Scott has been part of the Police family his entire life, with his father retired Detective Inspector Mark Loper and his grandfather former Constable Bill Loper giving him much to aspire to. He says those family connections to Police were “100 percent” his motivation for joining. 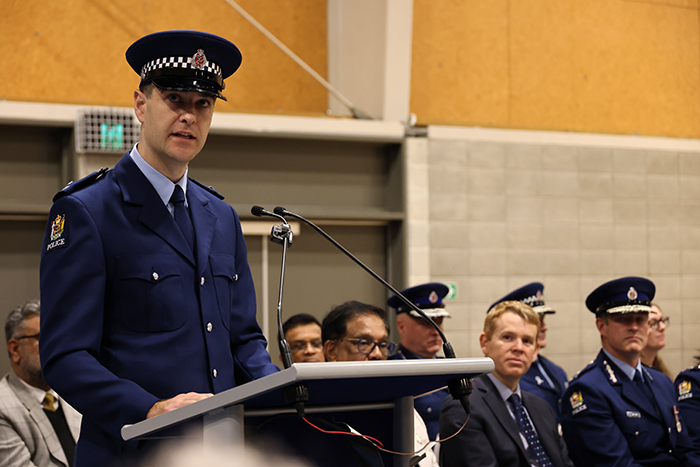 In his speech he paid a special tribute to his father and dedicated his award to him.

“He has shown me the value of hard work, the importance of perseverance, the necessity of family, but most critically what it is to be a good man.”

Just as Scott is proud of his father and his Police service, Mark was equally proud to see his son become a police officer.

Scott’s grandfather Bill was also a prize winner – he graduated top of his wing in 1964 and became a beat constable in Rotorua. Although Bill couldn’t make it to the graduation he was watching the live-streamed ceremony.

Scott’s career background has been in banking, most recently as a fraud and integrity investigator.

“This work set me up with some decent life experience to bring across to the Police. The pandemic hit and I thought it was time to pursue what I really want to do.

“I want my work to be meaningful, to finish up each day knowing I have made a difference and helped create a safer community.”

Scott is posted to Waitematā District. 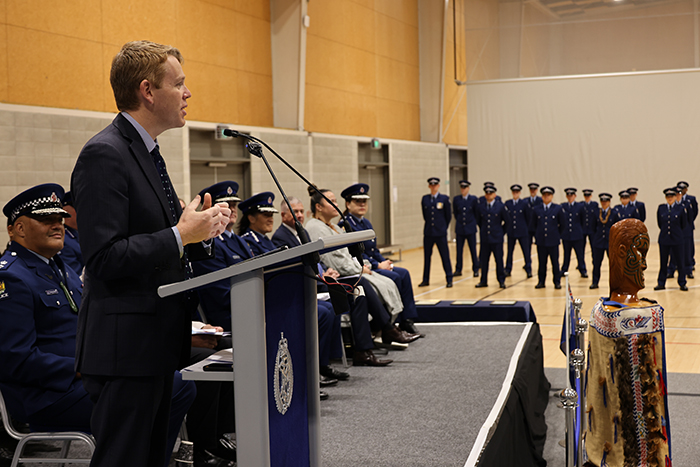 Police Minister Chris Hipkins, at his first Police graduation (above), spoke of the wing’s proud moment - one that required tenacity and grit to get there - and he thanked them for the service they’re about to undertake.

“We will ask a lot of you and we will expect you to give a lot in return. Always be proud of the uniform you wear and what you have achieved in order to be able to wear it.”

Familiar with taking on a challenge and succeeding are talented sportswomen Constables Jaymie King and Linda Itunu, who have retired from impressive high-performance sports careers to make a difference on the front line.

Jaymie came first in the wing and confesses to having a competitive nature. She’s won multiple national and international medals in elite track cycling and, on retiring in 2020, took up rowing and started racing, picking up a North Island title and medals at national championships.

Her work before joining Police was for the Ministry of Justice as part of a Court security team. She says she loved building relationships in that role, which led her to apply to join Police.

“I decided to move into a career where I could be out on the streets helping people and preventing them wherever possible from getting to court, or stopping them from returning as often.”

Jaymie is posted to Waikato District. 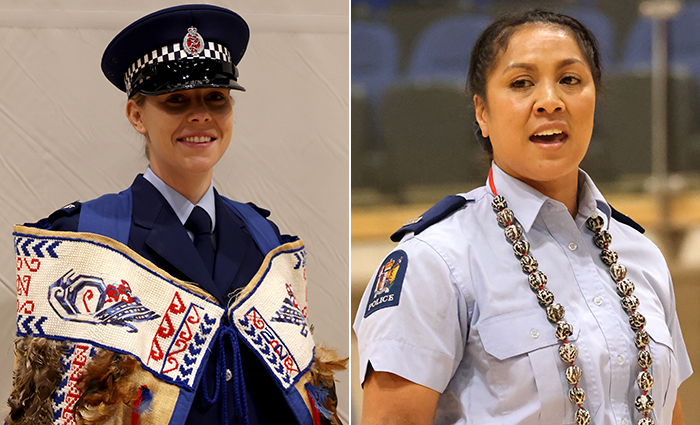 A Black Fern for 17 years, Linda hung up her rugby boots in 2019 to pursue a Police career.

Linda played rugby in both the 15s and 7s format and she captained the Barbarians team in 2019.

She has competed in six Women’s Rugby World Cups and has been a member of a World Cup champion team four times. Her highlight, though, was playing in the Black Ferns with her sister Aldora Itunu.

She’s also very proud to have received the Sir Fred Allen Supreme Award for Auckland Rugby in 2019 and to have been named in the World Rugby Team of the Decade in 2020 – named as one of the top 15 players in the world for 2010 to 2020.

She says joining Police had always been at the back of her mind. Thanks to some prompting from Senior Sergeant Sanalio Kaihau, in Counties Manukau District, and then seeing some Pasifika women in blue, Linda decided policing was the next step after rugby.

Posted to Waitematā District, she says she’s joined Police to be part of a high-performance team, a role model to her nieces, nephews and Pasifika communities, and to work for a safer and better New Zealand. 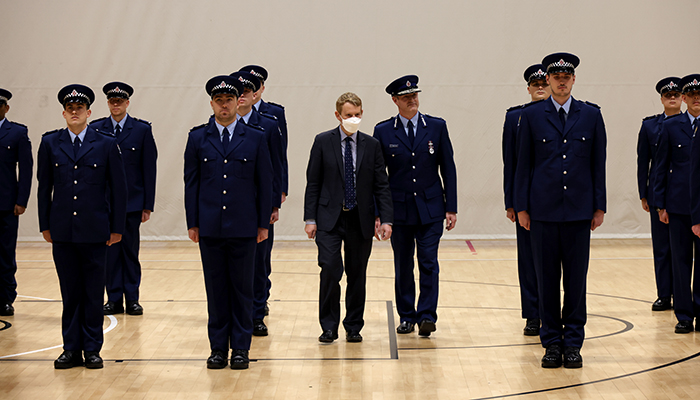 After nearly a decade in Police, Constable Gary Mitchell JP is taking his work in a new direction. Dedicated to helping others, Gary has been commended many times for his work as a custody and authorised officer and in 2020 was named a Sir Woolf Fisher Trust Police Fellow, recognising his excellent work and dedication to Police and our communities.

He says he’s making the move to a constabulary role because he’s looking for a new challenge, and wants to broaden his horizons while gaining new skills.

Before joining Police he worked for the Department of Corrections and received its Minister’s Award for Excellence, and before that he served in the Royal Navy and was commended for bravery and for saving a life.

Gary is a keen volunteer with roles including White Ribbon Ambassador, Justice of the Peace, Honorary Fisheries Officer and more.

He is recognised as a local hero who has put a huge amount of time and energy into his community in roles such as founder of Predator-Free Grenada Village and Grenada North, founder of Keep North Wellington Beautiful and Keep Porirua Beautiful, and Neighbourhood Support Street Coordinator.

Gary says he’s inspired to work with and for the community because he loves being with people and volunteering builds connections to them.

“For me, volunteering means working side-by-side with others. This connects me to other people as you are working towards a common goal, and also makes me feel connected to my community.

“Through your actions and involvement, you are benefiting others as well as yourself.” 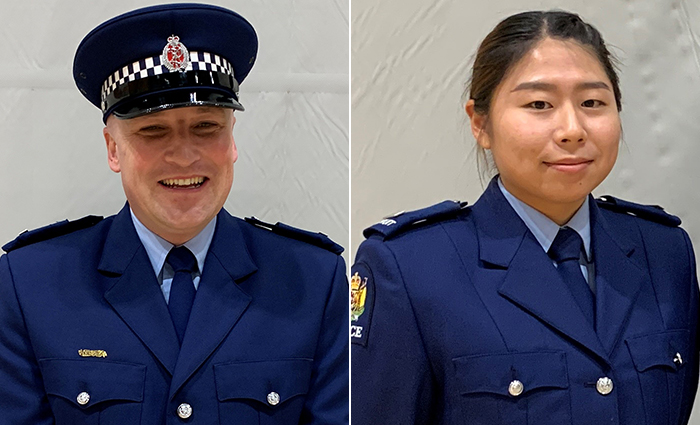 Young-Seo is originally from South Korea and moved to Auckland as a child. She says policing clicked in her mind when she was at high school, but she went on to gain a nursing degree first, to develop her experience and knowledge before joining Police.

“I love helping people and always wanted to have a job in which at the end of each day I would feel satisfied from helping others.

“I also really want to help guide young children and youth in the right direction, and work towards safer communities where people can enjoy their right to live without any fear of harm.”

Patron Pancha Narayanan, President of Multicultural New Zealand and a member of the Commissioner’s Ethnic Focus Forum, spoke of feeling privileged to be the patron and of his hope for a Te Tiriti-based multi-cultural society.

“In 2040 when New Zealand is 200 years old, we want to be saying that we are a Treaty-based nation of people from different ethnicities. And that, I’m sure, is the environment these people are going into.”

He passed on to the wing and audience a fitting whakataukī (proverb).

The wing will be posted to districts as follows...

Previous
Night shift a hoot in Eastern Bay
Next
WATCH: Rosie's game's a hit with Clued Up Kids