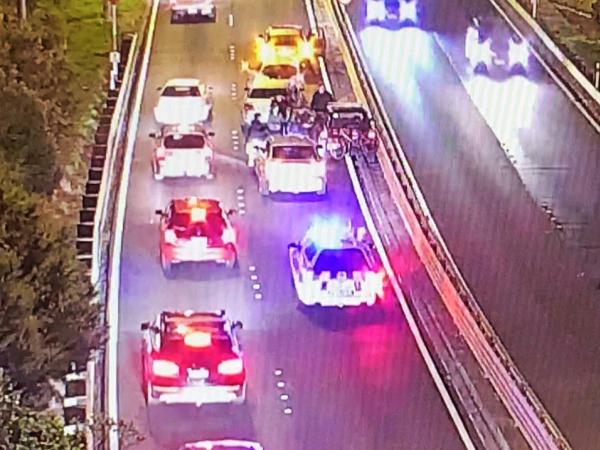 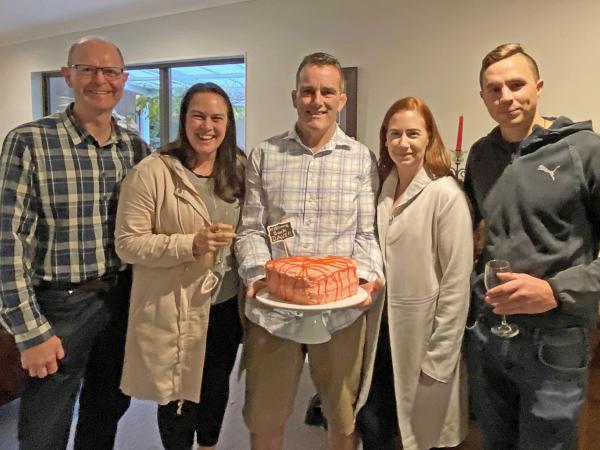 Home > News > Ten One Magazine > The gift of a fighting chance

Surrounded by family, friends and a few special guests, Dave Barker had a welcome back party to celebrate his return from the brink of death.

He blacked out and his car veered into the centre barrier of State Highway 1 in the Ngauranga Gorge, Wellington, hitting it nine times before coming to a halt.

The gift of a fighting chance was given to him by four strangers whose actions before the ambulance arrived saved his life.

Dog handler Constable Regan Woodmass was travelling southbound on State Highway 1 when he saw the crash scene near Johnsonville. He turned off at the nearest exit and went back up the highway to get there.

Before Regan and other members of the public stopped to help, 55 vehicles had driven past Dave in the space of two minutes.

“Thinking back to that night, it was a lot of good fortune and luck that the right people with the right skills were close by to help,” says Regan. “Otherwise, this would not have ended the way that it did.”

The first to stop was Irene Campbell, heading home from a stint as a swimming coach at Kilbirnie Aquatic Centre. “Irene informed me that the man in the car was unresponsive and in need of CPR,” says Regan.

“I approached the vehicle, noticing he was unconscious but looked okay to move, so I dragged him out of the passenger door to start CPR.

“Before he had hit the ground, Lizette Standish, a mechanic who had completed first aid training, jumped into action assisting with compressions.”

Stuck in the bumper-to-bumper traffic was Christopher Hoffman, an orthopaedic surgeon who identified himself to Regan and took over CPR.

Regan noticed an ambulance in the traffic queue 100 metres back and ran down to ask for assistance, and to help the vehicle through the traffic.

“In just over a minute of CPR, Dave breathed on his own for a bit and then went unresponsive again,” says Regan.

By this stage paramedics Natasha and Stu had arrived and Dave was moved into the ambulance where CPR continued. He had to be shocked several times before he was stable enough to move to hospital.

When he arrived, Dave was in a critical condition and put on life support.

Two days earlier, he had undergone a cardio treadmill test because of a family history of cardiac issues - but there was no sign then of any problem.

In the days after the crash, Regan received a call from Authorised Officer Jo Barry, Dave’s sister who works in the Crime Monitoring Centre, to thank him for his actions that night.

“I’m so thankful for everyone who helped Dave that night,” says Jo. “Though Regan is incredibly humble, Dave wouldn't be with us now if it wasn’t for Regan’s actions and quick thinking and his strength to drag Dave out of the car.

“As a family, we are hugely grateful for Regan’s response to what could have been a terrible outcome.”

Dave works for the Fire Service as a dispatcher and his colleagues watched the events unfold from the screens in their command centre. They recognised his car, saw him in distress then saw help arriving.

In the following weeks, Regan, Lizette, Irene and Chris kept in touch with Dave’s family to get updates on his slow but positive progress.

When he was well enough, a reunion of those involved in saving Dave was arranged to celebrate his comeback.

“As emergency services we don’t often get to see how things turn out but can only hope that by doing our best, we’ve given someone the best chance of survival,” says Regan.

“It’s been great to hear updates about Dave’s recovery. It was a privilege to meet him and his family under much happier circumstances.

“Dave is a really awesome guy with an amazing family and we had a great conversation at the reunion party. There were so many good people who helped that night and I’m just thankful that this story has a happy ending.”

Previous
'We, together, will never forget him'
Next
Māori Warden's gift of aroha