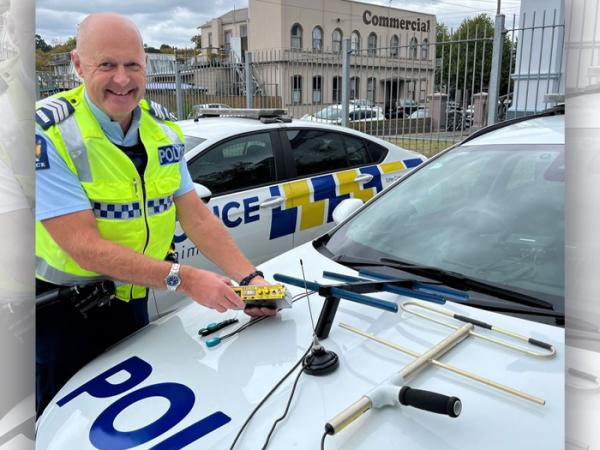 Home > News > Ten One Magazine > A great tool for SAR

Earlier this month, the Whanganui Tactical Dog Team received a call from Central Comms about a 67-year-old woman who had gone missing from her home.

The woman, who has gone missing on previous occasions, has Lewy body dementia and hallucinates badly, which causes her to wander. As a result, she wears a Wandersearch pendant - a small radio frequency tracking device that can be found using specialised receiver units and aerials.

The officers made their way to the isolated rural property just outside of Whanganui, where the woman lives with her husband, and commenced searching around the house.

During this time, Central Comms also contacted on-call O/C Whanganui SAR Sergeant Colin Wright who drove out to the property to assist his two colleagues.

“I had been involved in previous searches for the woman and while she is frail, she is active,” says Colin.

“The house is about one kilometre from the road so I when I arrived at the gate, I mounted the WanderSearch antenna to my police vehicle to see if it could locate a signal from the woman’s pendant.

“The officers, who had been searching for about 20 minutes before I arrived, continued to search around the house with police dog Veto to locate a track.”

The signal was particularly strong near some sheep pens, so Colin went to check it out with his torch.

Behind the sheep pen there was a fence and over this was a 2-3 metre drop into a stream.

On closer inspection, and within 10 minutes of the first beeping, Colin located the woman on the other side of the fence, clinging to it, cold and disorientated in the darkness.

“I don’t know how she got over the fence in the dark and if she had let go, she would have fallen and seriously injured herself or drowned,” says Colin.

“I called up Delta to assist and I got her over the fence to the team who took her back to her house. Thankfully she didn’t sustain any injuries and did not require any hospital treatment.

“The WanderSearch technology is brilliant – from me getting the call to locating the woman was just under an hour, and that includes the drive to the property from my house, which is out of town.

“WanderSearch is an invaluable tool for anyone who is vulnerable, such as children who require specialist assistance and people with dementia, as there is not usually a regular pattern of behaviour so without the pendant you would have to think completely out of the box.

"It’s also hugely beneficial from a planning perspective – we’ve had several searches with WanderSearch and people have been found in minutes versus many hours."

WanderSearch response is delivered by a variety of groups and organisations around the country. More information is available on the WanderSearch website.

Previous
Bike returned thanks to 529 Garage
Next
Winter warmers