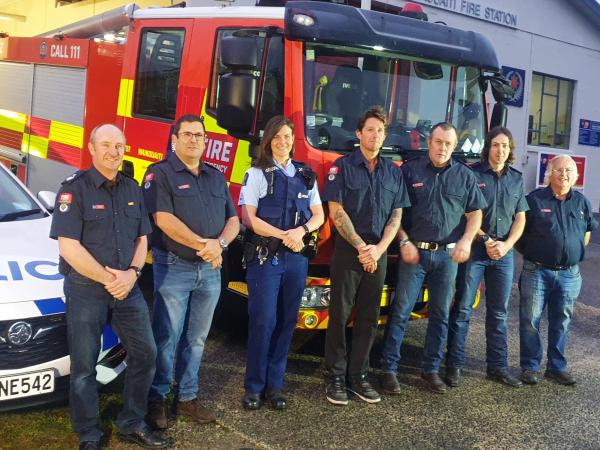 Home > News > Ten One Magazine > Happy to brave the shave

When the call comes in for assistance from the firefighters next door, Waikouaiti sole-charge Constable Olivia Winbush is always quick to jump into action.

Her response to an unusual recent request was no different, which is why on 27 June Olivia will be lining up with members of Waikouaiti Volunteer Fire Brigade to get her head shorn for ‘Brave the Shave’.

Olivia and the firefighters are raising money for the Otago and Southland Cancer Society, with donations helping towards care and support for those with cancer, and for research and prevention efforts.

Olivia says cancer affects almost all of us at some point, which is especially true for many in Waikouaiti, north of Dunedin.

Her predecessor in the sole-charge role, Senior Constable Lesley Eason, died from cancer in January, and Olivia was keen to join the fundraising effort.

Being a sole-charge constable in a small community means doing a little bit of everything, and in the past 12 months Olivia has dealt with serious crashes in remote locations, a capsized boat at sea, missing persons, rampaging sheep, lost teddies and lots in between.

“Policing in this environment also means you can see the direct result of your work, because you get to really know the community you serve and its demands,” she says.

“It’s great because you can see how we, as police, can make a real positive difference for those who need us, either in the moment of a serious incident or our longer-term work with people facing challenges in their lives.”

David says the team were a bit surprised when Olivia said 'yes' straight away, but the willingness to collaborate isn’t unusual.

In a small community like Waikouaiti, Police and Fire and Emergency New Zealand have a close relationship, with officers attending the same jobs and working together in the same difficult situations.

“Every year members of the Fire Brigade head up to Auckland for the Sky Tower Stairs Challenge, so it was a shame that was postposed this year because of Covid-19,” says David.

“When Brave the Shave came up it seemed like a great opportunity to raise some money for an important cause, and my team jumped at the opportunity - and the chance to include Olivia in the effort.”

While Brave the Shave might be a little less strenuous than running up the Sky Tower, it’s no less daunting.

While Olivia won’t be alone under the clippers, she will be – as things stand – the only woman braving the shave - and with the most hair to lose!

With a target of raising $10,000 over the next three weeks, Olivia and the guys next door have set themselves a big challenge, but one they’re excited to take on, and one Waikouaiti is right behind them with.