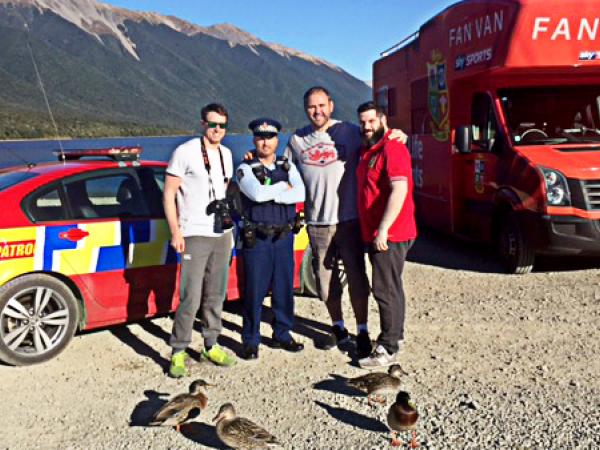 Home > News > Ten One Magazine > A helping hand over the hills

Tasman Highway Patrol units have been helping British and Irish Lions fans navigate the most challenging leg of the journey in the South Island.

With State Highway 1 still out of action north of Kaikoura, visiting rugby fans heading to and from Christchurch and all points south had to traverse the difficult alternative SH1 through the centre of the South Island.

Expat Englishman Constable Wayne Tilsley enjoyed catching up with some of his countrymen - but he was a bit reluctant to admit who he is supporting.

"We had goodie bags to hand out so it was a good opportunity to stop camper vans for a chat," says Wayne. "We were able to talk about things like highway conditions, expected travel times, taking stops for a coffee, having breaks. A general chat about New Zealand and what they could look forward to."

Wayne says the reception from the travelling fans was great . "They recognised my accent and we'd have a bit of a laugh."

As to that thorny question of who Wayne will be cheering for in the coming test matches, he admits he's an All Blacks fan after 14 years in New Zealand - "but I had to be a bit diplomatic".

Across Cook Strait, Wellington Road Policing staff also handed out gift bags to supporters getting on ferries in the capital. The bags - supplied by NZTA - contained important safety messages as well as some refreshments.