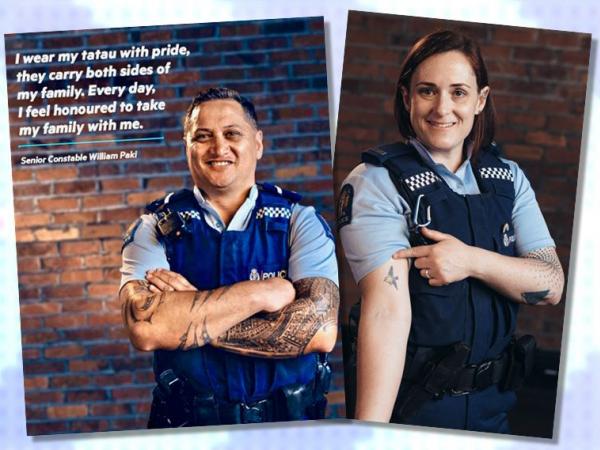 Police’s latest recruitment campaign ‘The Ink Beneath the Blue’ has seen a strong rise in applications - particularly in Auckland, and particularly among women.

The ‘Uniqueness’ campaign, which features members of staff telling the stories behind their tattoos, has generated more than 170 applications in the first two weeks.

The total of applications received is only marginally behind the total received in the first two weeks of last year’s much higher-profile 'Questions' campaign.

One of the staff featured in the ‘Ink’ campaign - Constable Leanne Benjamin, Diversity Liaison Officer from Christchurch - is impressed with the great response and high number of applicants.

“We really need people in Police who reflect our diverse communities: people like to have someone they can relate to and someone that understands them,” she says.

“So I encourage everyone to take that first step and express your interest in joining Police.”

Another officer featured in the campaign is Senior Constable William Paki, of Youth Services in Dargaville. Northland is another key target area.

“In my job my tatau has kept me safe, carrying the markings of my tūpuna and whānau,” says William. “It has helped me in my Police role working with many at-risk youth as most are of Māori and Pacific Island heritage.

“I’m able to easily connect with them and their extended whānau as we share history and are connected through the great migration and iwi affiliation with Aotearoa.

“My Police profile has changed mindsets and mended some of the perceived stereotypes that come with being heavily tattooed. Being part of the first responder whānau out in our wider community, helping families, puts that perception to rest.”

Kaye Ryan, Deputy Chief Executive People and Capability, says when staff bring their unique self to work it enables Police to be a better organisation.

“Whether it’s your tattoo, your background, your social or sporting interests – everyone as individuals enables Police to work most effectively in the community,” she says.