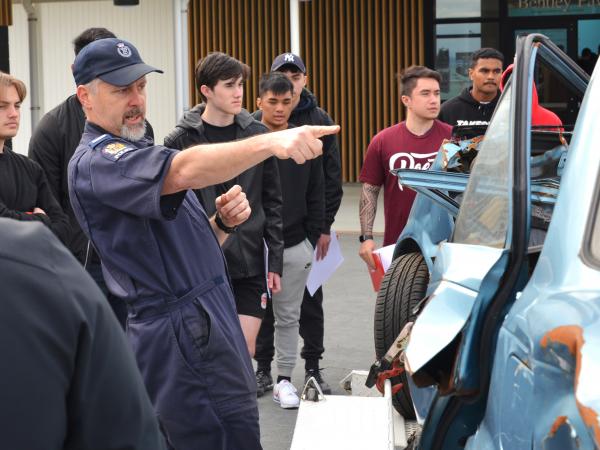 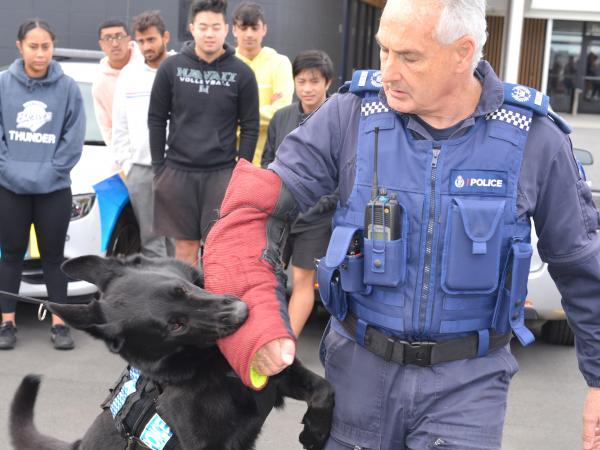 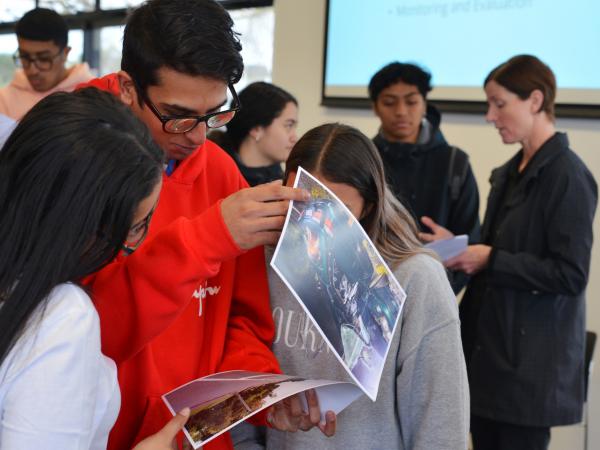 Home > News > Ten One Magazine > A lesson in road harm

Students from four Auckland high schools had the chance to see the impact of dangerous driving first-hand.

Constable Quintin Brown, of the Serious Crash Unit, was at Maclean College with the wreckage of a car whose driver was paralysed after falling asleep at the wheel and crashing.

He spoke frankly to students from Ormiston Senior, Tamaki, Selwyn and Macleans colleges about the harsh reality of the many road crashes he has attended.

It aimed to empower young people to make safer and better choices on the road.

As part of the workshop, students were able to view photographs taken at crash scenes, and learn more about how the forensics team assists in determining the cause of crashes.

They enjoyed time with dog section staff, gaining an understanding of the role they play in road safety.

Students broke into small groups and summarise their learnings before presenting to their peers. They also took part in a fitness session run by Police Physical Education Officer Thomas Maguren.

The Police Pathways Programme was successfully piloted in two Rotorua schools in 2018, and Vinesh says 61 schools across eight districts have now signed up.

All four schools who took part in Friday’s workshop are part of the NCEA Level 3 programme, which introduces students to the roles and responsibilities of Police.

Kaea Sanpson, of Ormiston Senior College, says she didn’t realise how much work went into finding the cause of a crash, whether alcohol or drugs were involved, and if the driver had been distracted.

Kaea says she is looking forward to becoming a police officer and being able assist in the safety of others.

She enjoys sharing some of her previous case studies with them, and Friday’s event was a great opportunity for them to meet Police staff and ask questions face-to-face about their future goal to become officers.

He says friends ask him for a ride even though he’s on his restricted licence, or have phones which can be a distraction when driving, so the session reinforced the fact that the law is there to ensure safety.

Vinesh says Police staff have been great in supporting the programme and engaging in locals schools and Friday’s workshop was more evidence of this.

With thanks to Sally French, Upper North Constabulary Recruitment