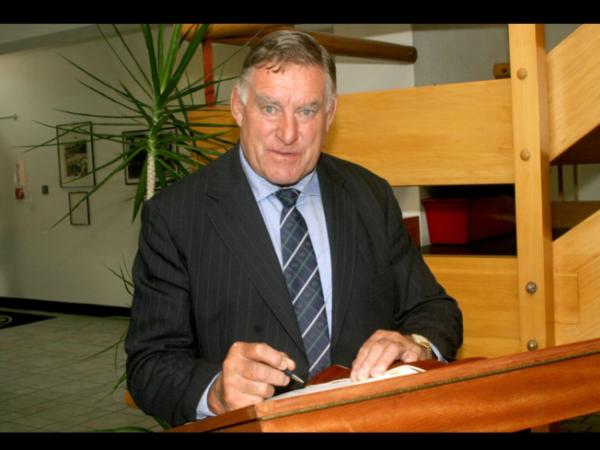 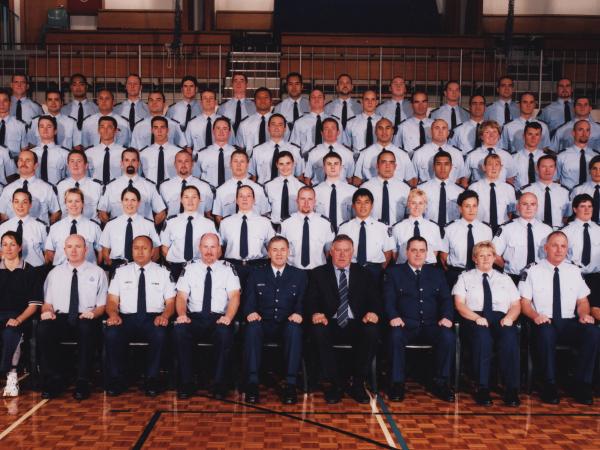 Sir Colin was Patron of Recruit Wing 225, which saw 63 constables graduate from the Royal New Zealand Police College on 25 August 2005.

In tribute, the formal wing photo was positioned with the RNZPC’s Pukaea Matariki, the instrument ceremonially sounded to welcome recruits and again at their graduation.

Wing 225 members are discussing forming a contingent to represent the wing at Sir Colin’s funeral in Te Kuiti next Monday.

Sergeant Jon Harris, of Canterbury – winner of the Minister’s Prize as first in wing – says wing members felt honoured to have such a Kiwi legend as patron.

“As first in wing I got to sit beside him at the graduation dinner. We had a lot of conversation over those couple of hours. I felt honoured to sit next to someone who was a national icon.”

He says emails were flying between wing members as they discussed an appropriate way to pay tribute.

Wing 225 colleague Sergeant Whiti Timutimu, of Gisborne, says as a rugby player and referee her jaw dropped when she found out who the wing patron was going to be.

However, Sir Colin had the knack of putting people at their ease – including cracking jokes during the taking of the formal wing photo.

“At our formal dinner he spoke to us about his upbringing and how he worked hard, and connected that to what we were going to be doing in our communities,” says Whiti.

“He said to us to work as hard as we could to support families and communities when we returned home.

“He had lots of rugby stories but I suppose what I remember most was his ability to engage with anyone. It didn’t matter who you were, he would stop and give you some time.

“Little bits of magic like that stay with you.”

Sir Colin provided memorabilia including a rugby ball and jersey to be auctioned to raise money for the graduation ball.

In his message in the Wing 225 book Sir Colin characteristically championed the need for police in rural areas – and urged the graduates to encourage young people to get involved in sport.

“Over the years the New Zealand community has developed high expectations of its police and like all police men and women you will find their demands and intolerance exasperating, but the expert training and tuition you have received on this course will hold you in good stead,” he wrote.

“Patrons do an amazing job, giving up their own time to be with the recruits, which is something our staff never forget. A patron’s loss is deeply felt by many people across our organisation.”