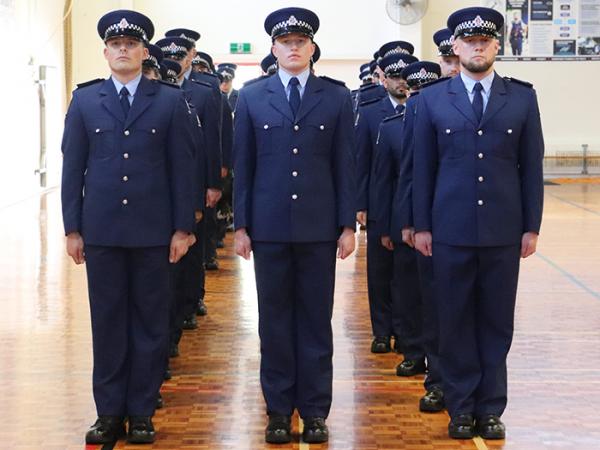 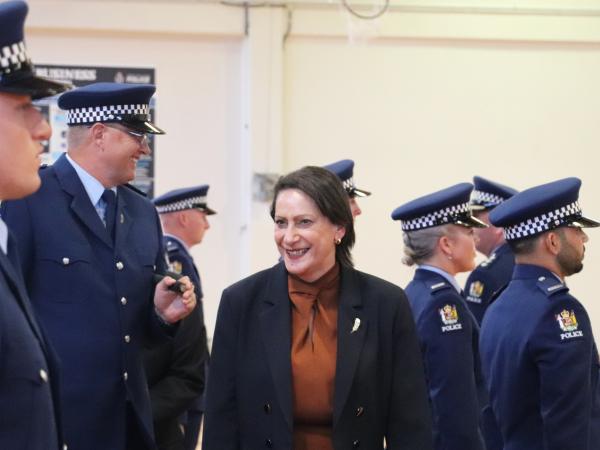 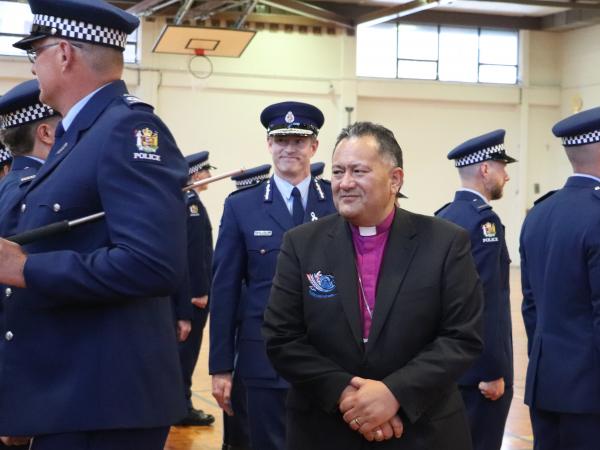 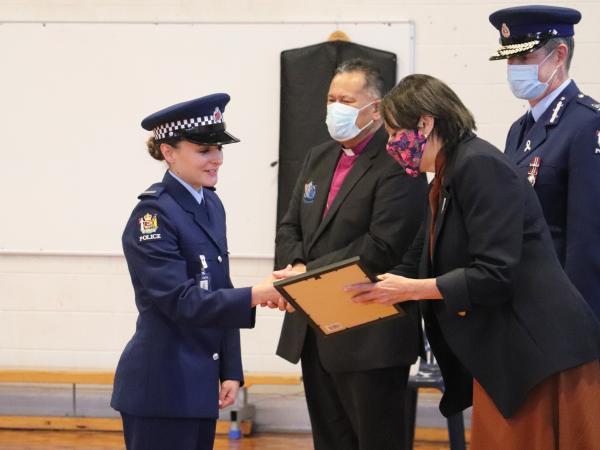 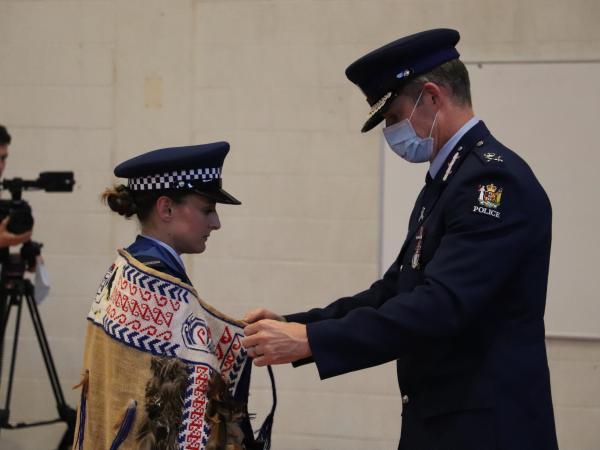 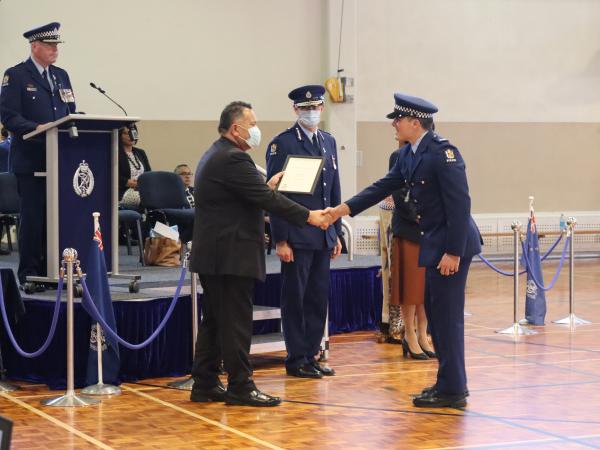 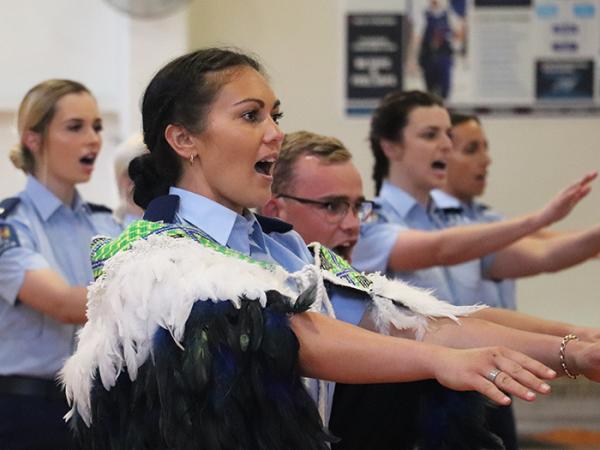 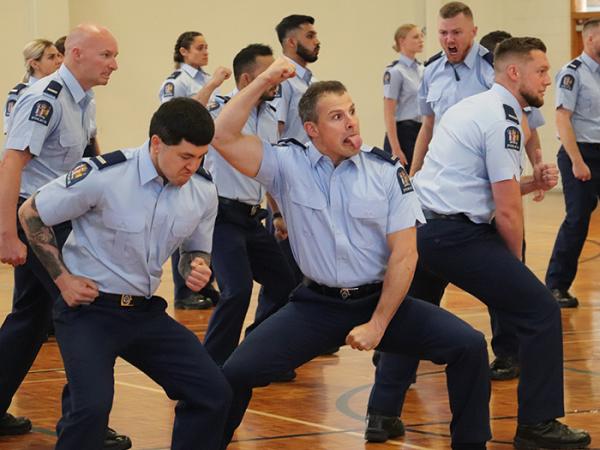 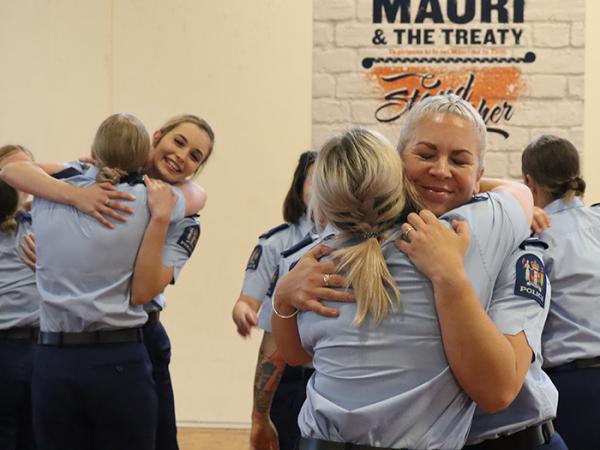 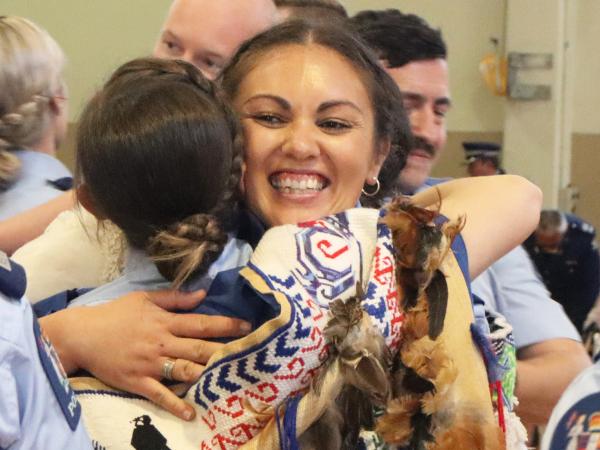 Thirty-six new constables of Wing 347 successfully graduated on Thursday (28 October), and having made the cut they are keen to get to work in their districts.

You could say it was a brush with the law, or even a close shave, that made Constable Jared Kirk apply to join Police. As a barber for the past five years, Jared says he cut a lot of police officers’ hair – and heard plenty of stories about the camaraderie, the variety of the job and the opportunities a police career offers.

“They told me of the personal satisfaction and reward they found in knowing they were making a difference in the community,” he says. “It was through conversations with them that I discovered I wanted to join Police.” 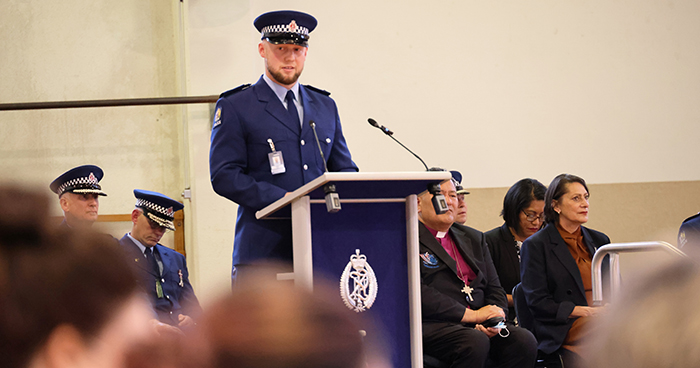 Constable Jared Kirk gave a speech on behalf of the wing.

From doing fades to a thought that wouldn’t fade, Jared decided his skills, knowledge and experiences were leading him to a new career where he could make a difference and help keep New Zealanders safe.

“Barbering and having kids of my own have taught me many things, but especially the power of communication, compassion for people, and a desire to see a safer community for us all.”

Jared received the Leadership Award at the graduation ceremony, and spoke about the journey he had taken with his fellow wing members.

“For some the path here was long, for others it had many obstacles ... yet regardless what the journey was, we all stand here today with the same heart – we came as individuals but we leave as whānau.”

Jared also received the Physical Training and Defensive Tactics Award and the Firearms Award. He is posted to Tasman District.

Constable Vienna Williams should be fast on her feet in her new job in Wellington District. Vienna has travelled around the world to compete in Irish dancing, including attending the 2011 World Championships in Ireland and more recently (but pre-COVID) international competitions in Australia.

Vienna says her brother – a police officer in Australia – and her partner in New Zealand Police have been her biggest inspirations for joining up.

“I have had a lot of great insight into the role of a frontline officer in two different countries. I feel so lucky to have these role models in my life. I can’t wait to continue on this evolving journey with the New Zealand Police.”

Another wing member with family ties to policing is Constable Renee Ngatai. Growing up, her father David Ngatai was a police officer in Hastings.

“I understand how much of a commitment and also how much of a toll policing can take, but I also know how much an officer and their family are cared for, helped and looked after as you are all one,” says Renee.

Helping people is her passion, and for the past few years she has done that in the community of Opotiki, working at Whakaatu Whanaunga Trust and helping with the community foodbank, holiday programmes, youth work and health promotions within schools and around the community.

As a mother of two boys, Renee says she’s excited by the prospect of this new career in Bay of Plenty District – “I can’t wait for myself and my boys to be fully immersed in the Police whānau!” 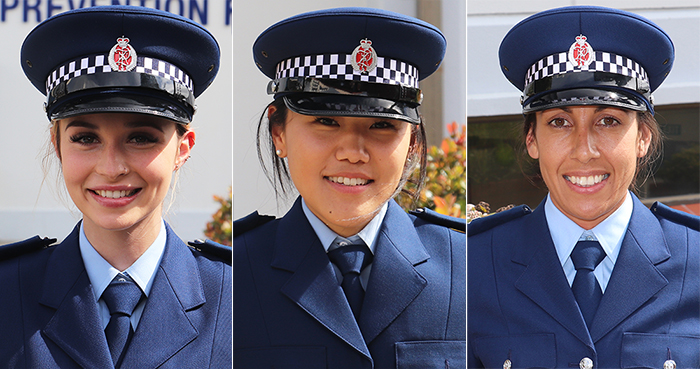 Several of the wing worked for New Zealand Police in other roles, including Constables Lauren Recny and Melissa Hu-Davidson.

Lauren is originally from the United States, but moved to New Zealand over 10 years ago and fell in love with the people, the culture and the New Zealand way of life.

Lauren, who received the Minister’s Award for first in wing at the graduation ceremony, has three degrees and meticulous attention to detail from 10 years of working in finance in a large corporation.

She says while working her way up the corporate ladder she came to realise, “the ladder I’d been climbing had been leaning against the wrong building!”

“I’d always placed great value in integrity, courage and justice and wanted to do work that would leave a lasting impact, which is why I decided to apply for Police,” she says.

“This is a job where I can leave a legacy to be proud of.”

While Lauren was waiting to be called up for the recruit training, she was offered a role in New Zealand Police, initially as a COVID Communicator and then as a Crime Reporting Line Communicator.

“This definitely gave me skills in dealing with stressful situations and taught me how to actively listen and better communicate with people – along with the opportunity to gain general knowledge of Police systems, communications and processes.”

“I would recommend a Communicator role to anyone thinking of applying for Police.” 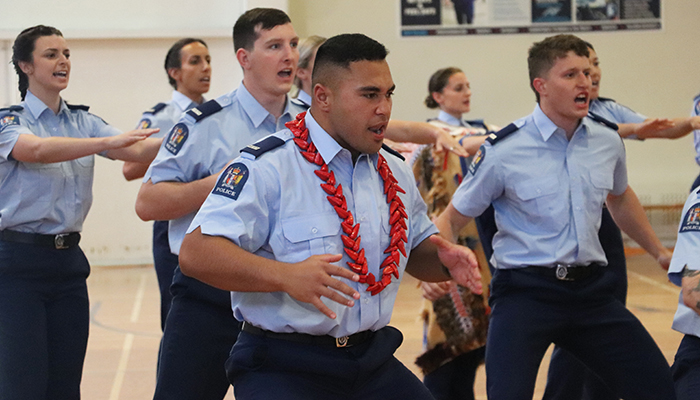 Melissa’s experience working for Police – interning for the Police Prosecution Service while she completed law and arts degrees – cemented the idea of a Police career that she had first thought about as a teenager.

“My mum ran a business while she raised me and her shop was targeted for theft and burglary on countless occasions. Each time Police played an instrumental role in retrieving items from the burglars and providing us with emotional support,” she says.

“Those experiences etched a positive impression of Police professionalism and empathy into my mind, and after experiencing the Police culture first-hand at the Prosecution Service the prospect of pursuing a frontline policing career only continued to grow until I finally made the decision to join.”

Someone who has brought plenty of life experience to his constabulary role is Constable Derek Dudley. Derek has had more than his fair share of challenges to overcome – a total-loss house fire, an accident that shattered his leg into 25 pieces and a brain tumour.

“All of these things have moulded me into who I am today and have made me a stronger person,” he says.

Derek is someone who gives back to his community whenever he can. He volunteered for nine years as a firefighter and while running a business he employed young people who needed a fresh start.

“Some had been leaving gangs, others had no family support. I love giving options and support to people who often have never known any other way, especially youth. By joining Police I believe I can support a far wider amount of my community than I ever would alone.

“Youth are our future; helping them is my why.”

Derek is posted to Southern District. 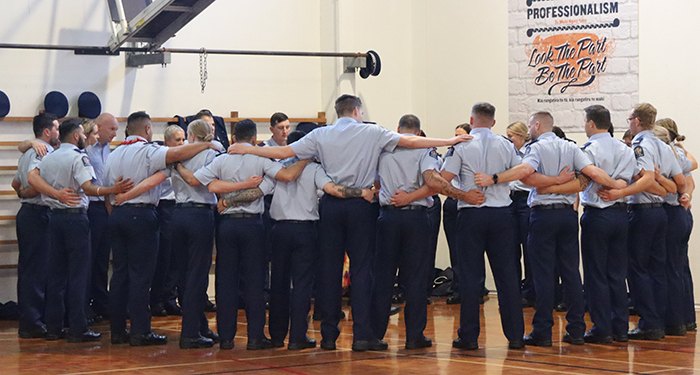 Commissioner Andrew Coster, Police Minister Poto Williams and wing patron Bishop Te Kitohi Pikaahu ONZM, known as Bishop Kito, attended the graduation. Due to COVID restrictions, family and friends could not be present, instead watching on via a livestream of the ceremony.

“If the waka is the New Zealand Police, the stern is your deployment … you become like a navigator.

“Like a good navigator you will know your way home … when you get home each day on your own strength with the help of others around you, have faith in yourself and trust in your instincts.” 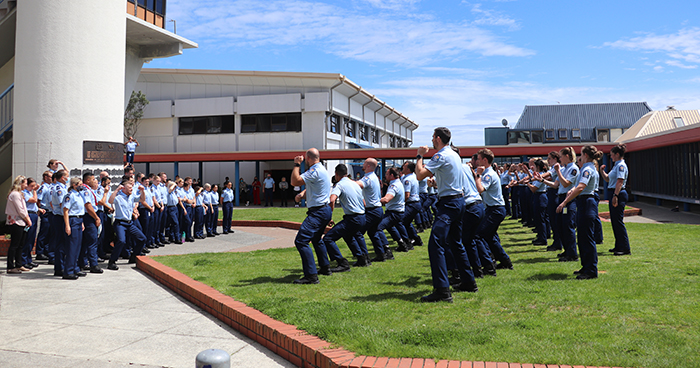 Wing 347 stand in front of the Memorial Wall before their graduation while members of Wings 348 and 349 honour them with the Police haka.

The wing is being dispersed to districts as follows, starting their frontline duty on 8 November:

Previous
‘Where is your emergency?’
Next
Canterbury dog team awarded best in class