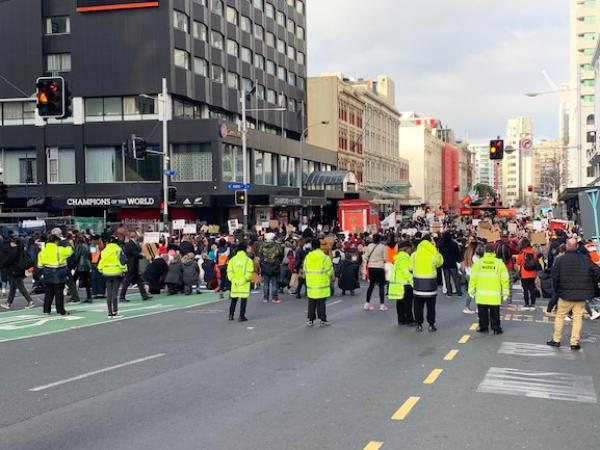 Home > News > Ten One Magazine > Marching in peace and solidarity

When thousands of people gathered in Auckland to stand in solidarity with the Black Lives Matter movement, Māori and Pacific Wardens were on the front line to help keep people safe and encourage good behaviour.

Speakers joined about 5000 people in Aotea Square ahead of the march down Queen Street earlier this month, with Māori and Pacific Wardens walking alongside the crowd.

Māori Wardens, a valuable community patrolling group which operates under a partnership of Te Puni Kōkiri and Police, provided practical support to the organisers by overseeing the march-goers and keeping people safe from traffic. The Pacific Wardens were deployed in support of their mahi.

“We were aware of plans for a peaceful demonstration and we recognise and respect the lawful right to protest,” says Auckland City Māori Responsiveness Manager Inspector Scott Gemmell.

“We liaised with our partners, including local iwi representative Graham Tipene from Ngāti Whātua, Auckland Council and Auckland Transport to help facilitate a safe event for everyone involved.

“We then liaised with the event organisers before the march and we were pleased with how well they had planned the march, even supplying their own crowd marshals.”

Scott says the Māori and Pacific Wardens did a great job helping control the crowds, with no issues to report.

“At one point a protestor briefly placed a banner over the windscreen of the a patrol vehicle blocking the officer’s view, but it was one of the wardens who brought the person back into line, asking them to catch up to the marchers, which they did.”

“The protestors were supported by the wardens at the lead and the rear of the march, with a number of police in patrol cars stopping traffic at intersections, so it was a fairly safe protest to walk in,” says Willi.

“Thanks to the work of the protest march organisers, Police, Iwi and council this was a largely peaceful event, which Police are very grateful for,” says Scott.

Previous
Te Pae Oranga, virtually
Next
Happy to be bald