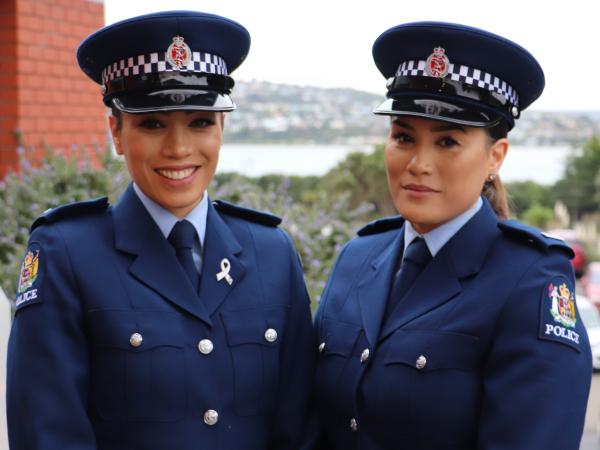 Batman and Robin aren’t the only crimefighting dynamic duo… meet some of the sets of twins currently serving on Police’s front line.

Constables Krisieta and Shawn Palaone (main image - Krisieta on the left), both work in Waikato District.

Krisieta, previously a Registered Nurse, was already experienced at helping people and has continued to help people in a different way since graduating in July 2019.

She says her twin sister Shawn was the main inspiration for her career change.

“Because I’m still frontline, I was working on PST through the COVID-19 response in Huntly,” she says.

“It wasn’t unlike my time as a nurse really – there was a lot of care around washing hands and everyone’s hygiene standards increased to the practices I had been used to as a nurse.

“I had to self-isolate from my family as I didn’t want to infect my kids, so I lived in a self-contained unit separate from the house so I could continue to work shifts.

“The hardest thing was not being able to see my partner, who lives in another district, and communicating with my kids from behind glass when they came to visit me.

“There were no hugs and it was difficult on my daughter especially, who being the only girl, had to put up with both her brothers.”

Krisieta also recalled having more staff to do the job while on lock-down as many patrols were made up of units who did more specialised roles in their day to day – such as her sister Shawn, a School Community Officer.

“There was a wealth of experience out on the front line during COVID,” Krisieta says.

Shawn has spent more than five years in the job already and has experienced a variety of frontline work.

She has recently worked with Youth Services, and the Investigative Support Unit which involved less direct contact with the public while she was pregnant – her second child arrived in August.

Luckily, they arrived one at a time. “Given how close in age my two children will be, I’m very relieved I didn’t have twins,” she says.

Constable Cameron Sinclair (on the left in the photo) graduated from wing 327 in 2019.  His identical twin Zach graduated in 2018. 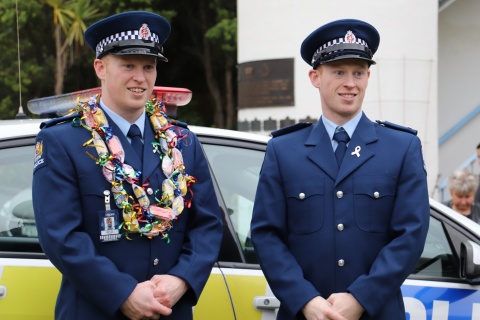 Cam applied to join Police some time ago but was pipped at the post by Zach, who  applied in Auckland where the constant demand for recruits gave him a faster track than Canterbury-bound Cam.

Zach works on Beat Section in Auckland City District and has had his fair share of interesting jobs.

He was called in to relieve on cordon points at Deans Avenue in Christchurch after the 15 March shootings last year, which he says was ‘stressful’.

Cam, who’s now based in Ashburton, in Canterbury District, had just started at the Royal New Zealand Police College the weekend and was on a flight to Wellington when the attacks happened.

“I live only two minutes’ walk to the Deans Avenue Mosque, which was pretty frightening,” he says. “My flatmates heard the shooting.”

Cam is on the Public Safety Team and enjoying the ‘bread and butter’ roles of a constable in a smaller town.

“You get a good variety of jobs, such as frauds, robberies and burglaries. I’ve even attended a homicide and a fatal crash, which were pretty eye-opening.

“During COVID-19, we were patrolling to make sure the public were adhering to the conditions of lockdown – looking out for party-goers and those flouting the rules.

“We stuck to our same roster, but we ended up with extra staff during that time.”

Cam is enjoying policing in Canterbury but says he has not ruled out joining his brother in Tāmaki Makaurau one day.

Constable Kylie Cardon (pictured on the left) graduated from Wing 315 in 2018 and inspired her twin sister Bronwyn Allen to follow. 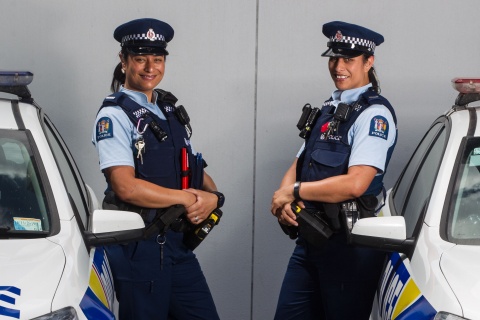 Bronwyn graduated in Wing 321 a few months later, and both are posted to Rotorua.

The 37-year-olds, from Tūhourangi and Ngāti Pikiao, are not identical twins, but you would be forgiven for thinking they are. It’s a good thing they are not on the same section, as it’s hard enough for their colleagues to tell them apart.

They both signed up to Te Wānanga o Aotearoa's 36-week introductory course which prepped them for the Royal New Zealand Police College.

Kylie, who works with the Bay of Plenty District Traffic Alcohol Group, was recently on duty at one of the COVID-19 managed isolation facilities.

She says she joined Police to help people and ‘reflect our community’.

Bronwyn, who serves on a Public Safety Team, wanted to help her community to keep safe. She has also been working at managed isolation facilities.

Both are enjoying their jobs and continue to enjoy confusing people as to which one they are!

Constable Conner McCabe (pictured on the right) couldn't attend his twin brother Findley's graduation on the last day of August.

Findley, or Fin, graduated from Wing 340 with no friends or family in attendance because of the COVID-19 Level 2 protocols at the RNZPC.

Fin had been working for Police in a non-constabulary role at the Crime Monitoring Centre, but had also volunteered at the Otago Corrections Facility. He is also a qualified marriage celebrant, so justice is in his blood.

They are both in Wellington District - Fin in the Impairment Prevention Team and Conner, who graduated from the RNZPC in 2018, at Paraparaumu.

Both brothers graduated from Otago University with a bachelor degree in Politics – the only difference being Conner completed a Masters as well.

“I wanted a job where I didn’t know what would be happening from one day to the next,” says Conner.

Fin says his previous Police roles were rewarding, but he wanted to be more hands-on.

Both saw themselves in uniform at some stage in life - for Conner it was an Army uniform first, and now both of them wear the Police blue.

They might consider returning to Southern District one day – their home town being Dunedin. Their grandfather Terrance McCabe policed in Dunedin, Balclutha, Gore and Invercargill from 1957 to 1965, so policing south has a certain attraction.

“It would be good to end up back down there at some point – I’m not ruling it out,” says Conner.

Wherever they end up, they hope people won’t be confused. They don’t actively try to trick people about who is who, but it still happens regularly anyway.

“We both answer to each other’s names – it happens so much,” they agree.