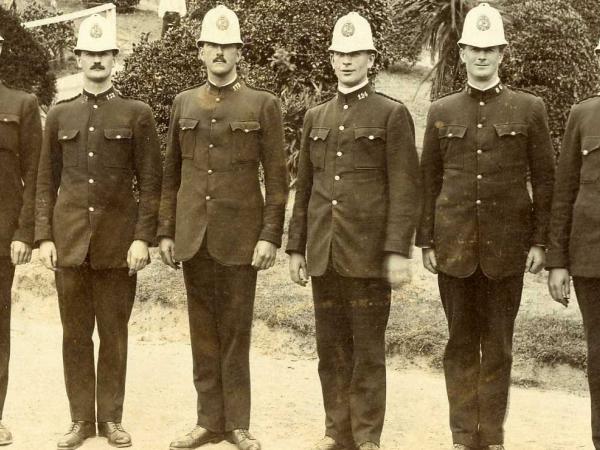 During World War One, while the boys in khaki were battling the enemy overseas, the boys in blue were facing a very different kind of war back home.

The role of New Zealand Police on the home front is the subject of a presentation by Police Museum Director Rowan Carroll to a conference at Victoria University of Wellington, which starts today.

At the time Police had 880 officers. As well as business as usual, they had to enforce a raft of unpopular laws arising from militarisation and take up the slack for other agencies whose staff went to war.

Their duties included prosecuting seditious acts, discovering and monitoring aliens and, after conscription was introduced in 1916, finding ‘shirkers’.

“Of those 880 officers, 240 were in one-man stations,” says Rowan. “It was a very thin blue line and an indication of how embedded individual officers were in their communities.

“It was a terrible situation to be put into. They must have felt very conflicted.”

Rowan cites the example of the Codys, a highly popular farming family from Riversdale, Southland, whose members took to the hills rather than compromise their Irish nationalist ideals by fighting for the British Crown.

“They were persecuted. They were such a well-loved family before the war but police had to keep harassing them.” The official persecution continued long after the Armistice.

Rowan’s presentation - Policing the War: New Zealand Police 1914-1918, the invisible military machine – is based on her own research and that of historian Dr Elizabeth Plumridge, conducted for the Police Museum.

The research came about amid preparations to mark the centenary of the start of the war – and questions about why few police stations had honours boards commemorating fallen members.

The answer is that police were not allowed to enlist. To do so involved formally resigning, with loss of seniority and pension. In contrast, other agencies encouraged their staff to enlist, even paying half of their wages while they were away – and while police were performing their duties for them.

Rowan is presenting tomorrow (Friday 1 September) as part of the three-day conference Dissent and the First World War, organised by Victoria’s Stout Research Centre for New Zealand Studies and the Labour History Project.

Click here to read an in-depth interview with Rowan on Newsroom.co.nz