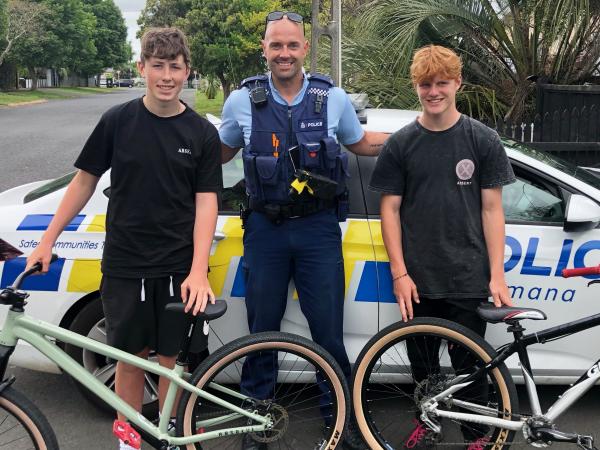 Two Hamilton teenagers have been reunited with their bikes after they were stolen and then sold online - thanks to some after-hours stooging and good work by Waikato District Prevention staff.

Around midday on Tuesday 6 October the teens, Joel and Charlie, were inside the Emm Jay Dairy in Hamilton when two people stole their bicycles from the rack outside. The bikes weren’t locked to the rack but were visible from inside. The culprits then fled on the bikes, heading toward Galloway Street.

Police were called and CCTV footage was obtained from the dairy. The teens then later called Police again on 105 to provide serial numbers for the bikes, which were worth a combined $3350.

Later that evening, the mother of one of the teens posted an appeal for information on a community Facebook page. Constable Pete Van’t Wout spotted the post and contacted the woman, advising her to provide info to Police via 105. She later advised that the bike was being advertised for sale on Facebook Marketplace.

Pete found the post and looked up the advertiser’s profile, identifying the seller. A check identified the suspect as being an active offender on bail for similar offending.

The next morning officers visited the suspect’s home address, where a woman told Pete the suspect was at an interview. Through communications with Corrections, GPS tracking of his EM bail showed the offender was at Seddon Park.

He was arrested for breach of bail conditions and in interview admitted selling the cycles for $360. Contact was made with the purchaser – a Filipino man working in Cambridge on a visa, who had bought the bikes for his children back in the Philippines as a gift.

Pete says the man was incredibly remorseful, had no idea about the value of the bikes and is now out of pocket. The bikes were returned to their owners on Wednesday afternoon – just over 24 hours after they were stolen.

The 30-year-old offender has been charged with breach of bail and further charges are likely.

Great work by staff who worked after hours to reunite the boys with their bikes.