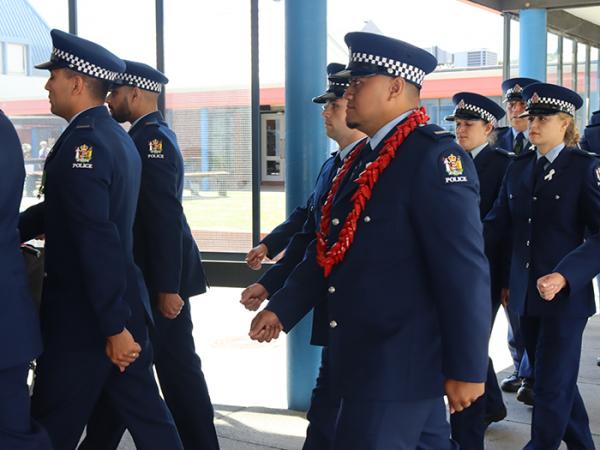 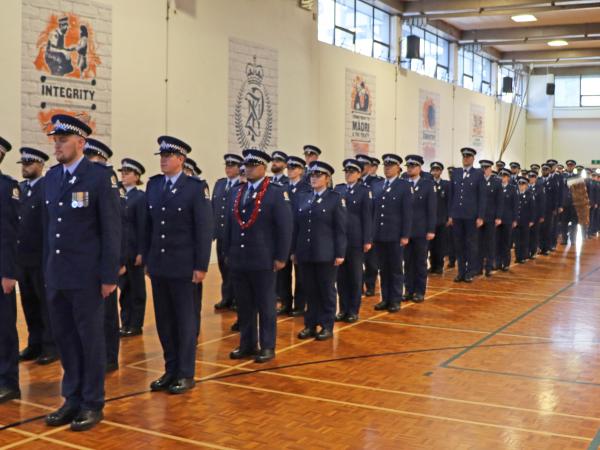 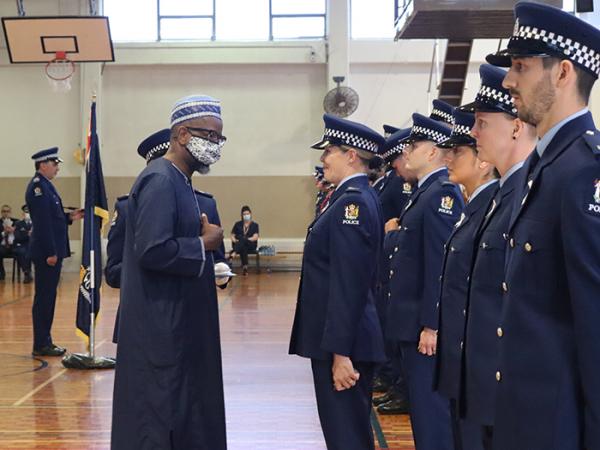 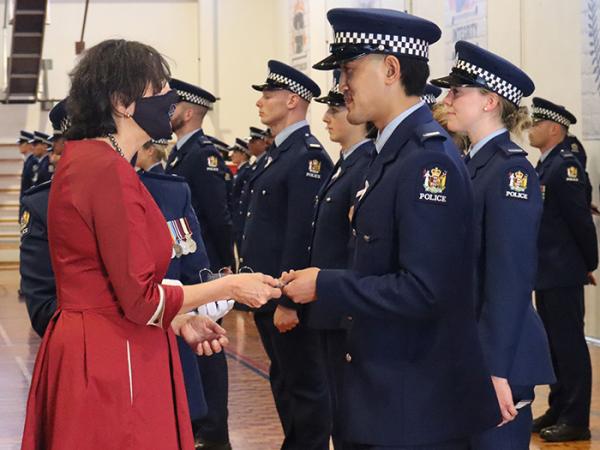 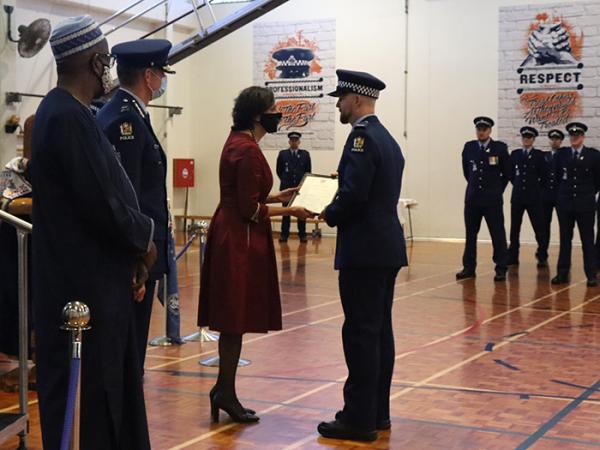 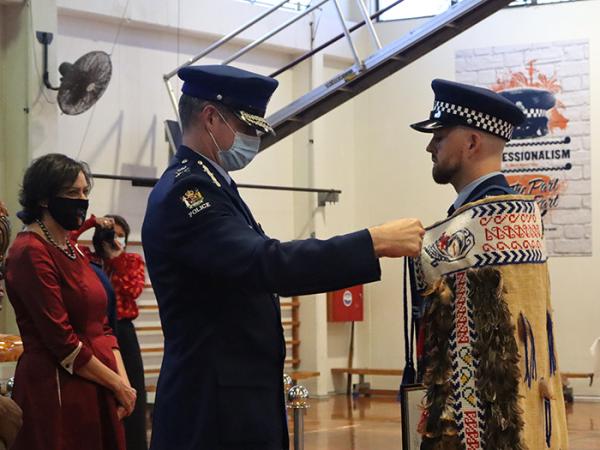 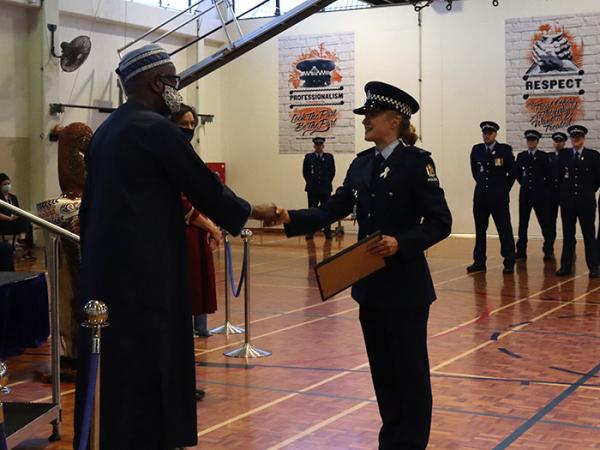 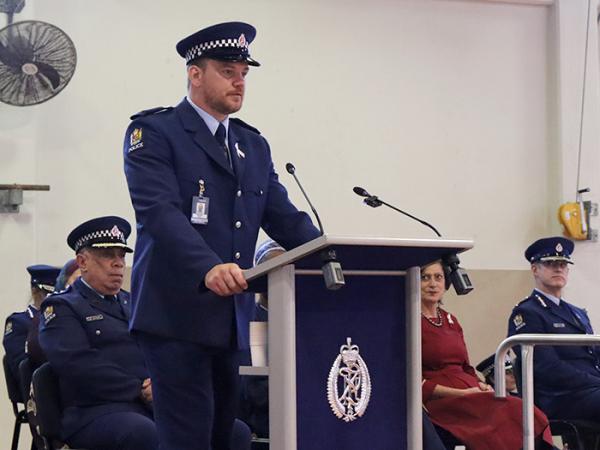 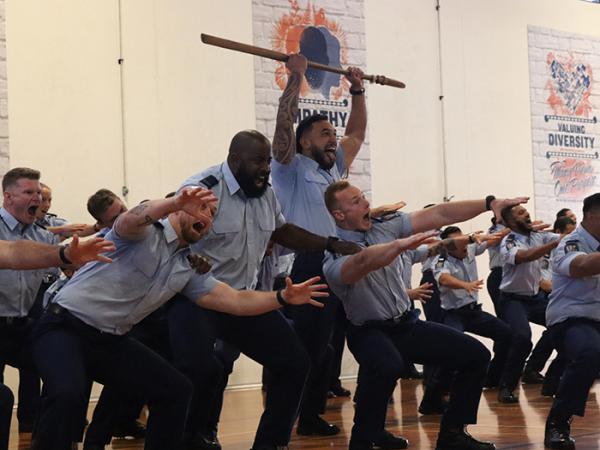 At a time when we can’t easily travel the world, the world has come to Police with the graduation of Wing 348.

Many of the 59 new constables grew up overseas, and with the list of countries of origin circumnavigating the globe, reading about the new constables is like taking a world tour.

From Australia to Singapore, then on to Korea, India and Afghanistan. It’s off to Europe: Kosovo, Germany, and Spain. Head north to the United Kingdom, then across the Atlantic to Canada and the United States. Don’t forget to pop into South Africa. Then it’s back to the Pacific, calling in on Samoa and Fiji before touching down in Aotearoa New Zealand. (In this world tour there’s no MIQ.)

The wing acknowledged its diversity during the graduation ceremony when 17 members stepped forward to say, “From our diversity comes our strength” in 17 different languages including sign language. You can watch the video at the end of this story.

Constable Lewis Ferguson, posted to Counties Manukau District, took out the top award for first in wing at the graduation ceremony on Thursday 25 November.

Lewis grew up in Auckland and managed to get in some globe-trotting before COVID shut that down, working for a couple of summers as a camp counsellor in the USA.

To do that he took some time out from his role in Police Communications as a dispatcher, and says the time overseas helped give him the life experience he felt he needed to move into this new role.

“Dispatching and working in Comms ignited a spark in me to want to go into a constabulary role,” he says.

“And after returning from the USA I felt more than ever that I was ready.

“At Comms I managed many critical events and all these experiences have definitely set me in good stead for a career in policing.

“I want to help people, to be there for those in crisis, and help change the life paths of those who are heading in the wrong direction.”

The award for second in the wing went to Constable Friederike Faber, who was born and raised in Germany and first came to New Zealand in 2013 as part of her overseas experience.

“I fell in love with the country and its people, and decided to make New Zealand my permanent home,” she says.

“One of the main reasons why I joined Police is to give back to the country that has welcomed me so warmly. I always felt accepted and safe, which is why I now want to do my part so that all others can be safe and feel safe as well.”

Friederike will be working in Counties Manukau District. 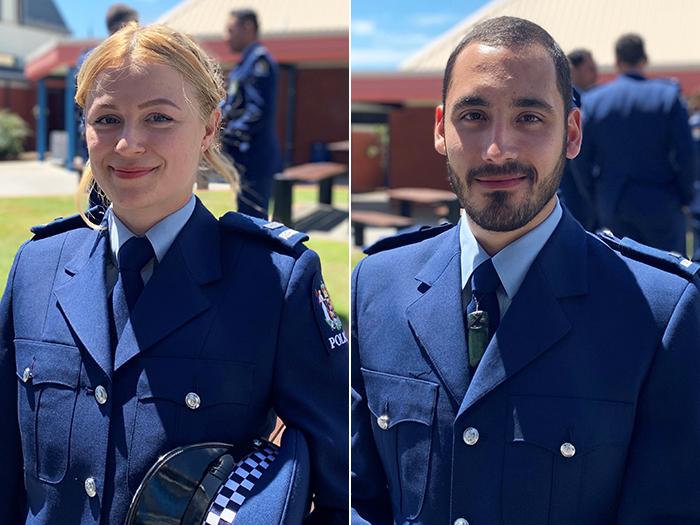 Constable Xavier Vidal Frugone is also originally from Europe – a triplet, he was born in Barcelona, Spain, and moved with his family to New Zealand in his late teens.

Xavier is accomplished in many areas, from music (he plays the saxophone, drums, clarinet and guitar), to photography and film-making (he has directed and produced several short films and a traffic safety awareness campaign), and competitive archery, in which he has won international competitions. He has also worked in aerospace engineering.

With all that in mind, it’s not surprising he has joined Police because he wants a job that is challenging.

“I need an environment that challenges me mentally and is fulfilling. I’ve always wanted to help people and make a positive difference,” he says.

“I want my actions to have a purpose.”

Xavier is posted to Auckland District.

The Leadership Award winner is Constable Matthew White, who says the diverse range of paths a police career can take is what interested him in joining Police. With a young family – including 8-month-old twins – family is also a big part of his “why” for joining the Police whānau.

He has played first-grade rugby in Australia and was living in the UK when COVID struck – the deciding factor in he and his partner returning home. Matthew says playing team sports growing up and at a competitive level has benefited him in building friendships and working in a team.

In his address at the graduation he laid down a challenge to the wing:

“I challenge you to proudly carry the attributes you identify within yourself. You are strong, you are resilient, you are empathetic, you are respectful and more importantly, you are human.”

Matthew is posted to Northland District.

Constable Jonathan Hori, also posted to Northland District, has served with the British Army as an avionics technician and used to fly across the world as an airline pilot.

He was flying high on graduation day for another reason – the birth of his daughter that morning. Dad stayed at the hospital to support his wife and baby, opting for baby cuddles instead of the graduation.

He passed on this advice to anyone outside of Police thinking of a career change: “Seriously consider joining the Police.

“Through my time in the Army and as an airline pilot I have faced many challenging situations which I think has equipped me well to deal with some of what this job will throw at me.

“I’m sure this would apply to many others who maybe don’t realise the potential they have for working in the Police.”

Wing patron Dr Mustafa Farouk QSM also brought a global viewpoint to his time with the wing. At the beginning of their training he spoke to them of the styles of policing he’s witnessed in the country he grew up in, Nigeria, and in other countries such as the USA.

In his opinion, New Zealand has “the best police service in the world”.

At the graduation he spoke about how Police have to rely on each other and be resilient, and asked his wing to “remain good to one another”.

“Our relationships remain at the heart of whatever we do ... it is about who we are as people, as whānau and as a nation.”

Dr Farouk is a highly-regarded leader in New Zealand’s Muslim community. As a member of the Police Muslim Communities Reference Group, he provides expert advice and guidance to inform Police direction and strategy. This group guides Police in the implementation of the Royal Commission of Inquiry into the 15 March Terrorist Attacks.

In the aftermath of the attacks in Christchurch, Dr Farouk deployed immediately alongside Police and played a pivotal role – liaising with Police and helping to plan the response to provide reassurance to affected families and the wider Muslim community. He has also been a voice for the Muslim community on firearms law reform and a tireless advocate to address hate and discrimination.

White Ribbon Day was recognised during the graduation, with the graduates wearing white ribbons and both the Commissioner and Minister of Police speaking of the importance of the theme, ‘Shine a light on violence prevention’.

“I would ask our new constables to take every opportunity to prevent harm and to promote respectful relationships, as your efforts will certainly help change lives for the better,” said Commissioner Coster.

The Minister, who has worked in a Women’s Refuge and on family and sexual violence programmes, spoke of the need for everyone to get behind preventing family harm.

“Every one of us has a role to play to prevent this harm and to break cycles of violence. Shining a light is so important, because we want people to know how to get help, or how to intervene to help.” 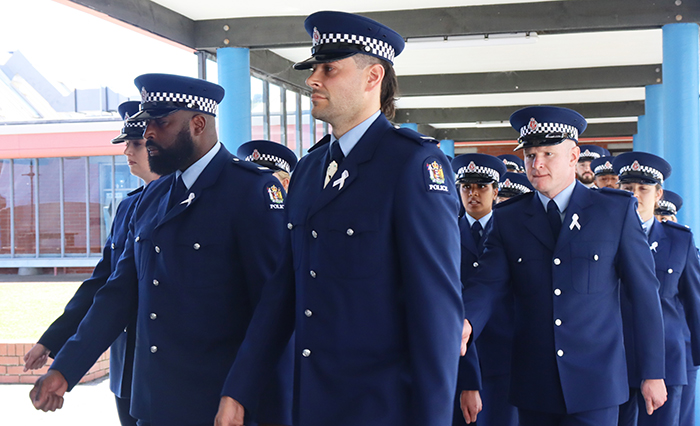 The wing is being dispersed to districts as follows, starting their frontline duty on 6 December: