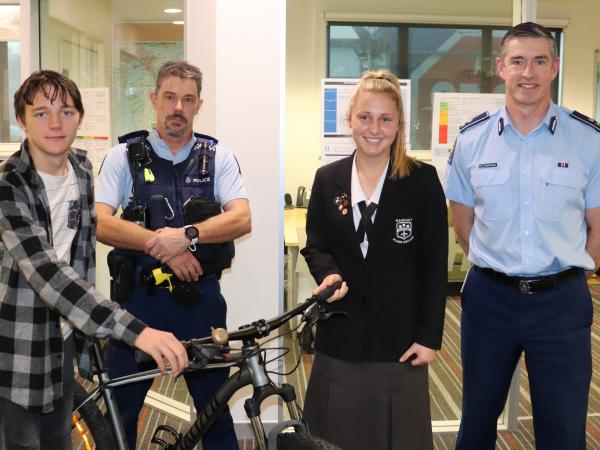 Home > News > Ten One Magazine > On the road again

When 13-year-old Josh’s dad told him he had an appointment at the Pukekohe Police Station he was understandably nervous - especially when he was told the Commissioner of Police was there to see him.

What Josh didn’t know was that he was about to get the surprise of his life.

Weeks previously, Josh's bike was stolen while he treated his friends to lunch at McDonalds with money he earned doing jobs for his dad and neighbours. He had bought the bike - his pride and joy - with money he had saved up and with a contribution from dad Aaron.

Staff at Pukekohe Police Station were able to call on the local Bikes for Youth project. A replacement was found for Josh - and the day Josh called in to receive it, Commissioner Andrew Coster was visiting the station and was able to take part in the handover.

The theft was reported to Pukekohe Station, where it landed with the Community Team. They set the wheels in motion to find a replacement and turned to Bikes for Youth, a project run by 15-year-old Jaymee Davies, daughter of Senior Sergeant Richard Davies.

The project has been running for two years with the aim of giving donated and refurbished cycles to low socio-economic schools in Counties Manukau South to encourage and inspire kids to come to school to learn and benefit their future.

Bikes are also given to individuals who are working hard to achieve their goals or need a helping hand.

“I originally saw a post on the New Zealand Police social media regarding a bikes initiative in Whanganui run by Senior Constable Jason Page," says Jaymee.

"After making contact with him and hearing the story behind his project and his focus on helping kids from homes experiencing family harm, this inspired me to look into how I could give back to my community through something similar."

Donated bikes are brought up to speed by qualified bike mechanic Constable Mike Cornelius, who repairs and cleans them up in his own time, and has so far completed more than 20 donated bikes. He is thrilled to be back on the project after delays brought about by COVID-19.

“It’s great to be able to give back to our communities and help build that trust and confidence, often helping those who have been victims of a crime," he says.

"I enjoy being able to use my skills from my time before becoming a police officer to help others.

"With this project starting to evolve after COVID has set it back a few times, it’s going to be fantastic to get these bikes back into the community and see kids riding them. As a famous cheese ad states… 'Good things take time'!"

With the bike serviced and ready to roll, everything was in place to surprise Josh with his new wheels. Commissioner Coster took the opportunity to thank Jaymee, Mike and the team for their efforts. He also praised Josh for his hard work and community spirit.

Josh was delighted with the bike presented to him by Jaymee, along with a new helmet. He was also gifted a voucher by McDonalds Pukekohe so he can once again take his friends out for a meal - although this time he’ll be taking a bike lock with him.

Each bike also comes with a helmet thanks to the Pukekohe Warehouse, who have to date donated 60.

Previous
Many hands make light work
Next
Never give up