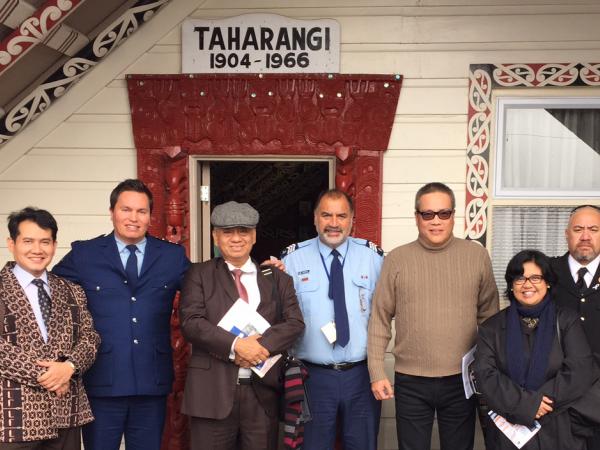 Two high-level Indonesian delegations have been in New Zealand to study aspects of Police’s work.

Four National Commissioners from Indonesia visited Wellington and Rotorua this month to learn about policing in a multi-ethnic environment – particularly Police’s relationship with Māori.

The role of the Commissioners – or Kompolnas - is to advise the Indonesian President on matters related to security, policing, human rights, law and other areas of public service.

They heard presentations from Assistant Commissioner Wally Haumaha on the Turning of the Tide strategy, and from other Māori Pacific and Ethnic Services (MPES) members on policing initiatives including Iwi-based Panels and the role of kaitakawaenga, or iwi liaison officers.

One highlight of their visit to the Royal New Zealand Police College (RNZPC) was seeing a group of school students on a day visit interacting with recruits.

“This experience put in context the humane and civil face of Police, which the delegation was keen to promote on their return to Indonesia,” says Fadi Antoun, of Police’s International Service Group.

The New Zealand visit ended with a trip to Taharangi Marae in Rotorua, where delegates heard about the history of the marae, Māori communities in Bay of Plenty and some successful Police initiatives to engage with communities.

At Trentham the BNN delegates – who are tasked with developing a drug dog programme in Indonesia – learned about detector dog training and operational work, observing teams from Customs, Aviation Security and Fijian Police, who are in training.

“They were impressed with the national and international engagement and partnerships we have developed and the work being done on security both at our borders and overseas,” says Todd.