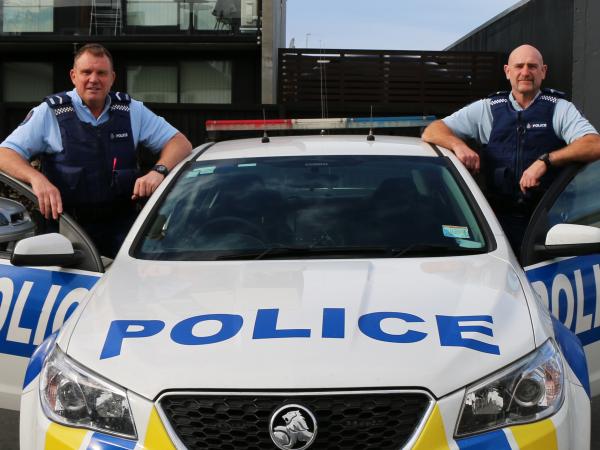 Senior Constables Jim Manning and Scott Carmody have received the New Zealand Bravery Decoration for their arrest of the Christchurch terrorist. Earlier this year, they spoke to Ten One about the events of the day.

There was shooting, there were dead and injured people in Deans Avenue. The training was declared complete and all staff were told to deploy.

Jim and Scott decided to stick together. They had known each other for 20-plus years, having played rugby together back in the day. They had hardly ever worked together – with Jim at Lincoln and Scott at Arthur’s Pass – but each knew the other was a good man for a crisis.

They each retrieved their rifle, handgun and Taser, put on ballistic armour, then set off toward the city in Jim’s car. As Jim drove, Scott monitored the car radio, hearing reports of multiple casualties and multiple offenders at the Al-Noor Mosque.

Shots were reported at the hospital, but experience told them to look elsewhere – Deans Avenue was covered and the offenders weren’t there; the hospital alert probably arose from injured people arriving there.

“I was thinking some poor New Brighton community cop’s going to be pulling up these guys and he’s not going to be armed,” says Jim. “We need to go wide because we need to be where the police guns aren’t.”

As they drove east on Brougham Street, the radio reported an offender’s vehicle – a Subaru, registration number KSH90 – heading east on Bealey Avenue, on a parallel course to theirs. There were reports of a gunman on foot shooting in Linwood, and shots fired from a car.

Then there it was – a Subaru, bullet holes in the windscreen, hazard lights flashing – coming through a red light in the opposite direction.

Jim performed a U-turn. They had to stop the car, whatever the cost.

“I was thinking ‘There’s a good likelihood we’re going to die’,” says Jim. “But I remember looking across at Scotty and thinking ‘This guy’s got it, I’ve got it, we’ve got it, this is us’.

“It’s like we were heading down the Valley of Death and my brain said ‘Fear’s no good to you, mate. Turn that off and deal with what’s in front of you and you’ll stay alive’.”

“I think it’s the way police are wired,” says Scott. “You have to do something. Doing nothing is much harder than doing something, even if the something is not something you would necessarily choose.”

The Subaru was weaving in and out of the traffic. Jim and Scott closed on it, certain that at any moment one of the multiple people they thought was inside would start shooting. Scott, with his rifle, was ready to respond.

“I kept telling myself ‘When the windscreen shatters, don’t stop’,” says Jim. “Keep driving, Scotty will know what to do. Whatever happens, he’ll be there.”

After a few minutes a break in the traffic exposed the Subaru in the left-hand lane.

He floored the accelerator and angled the police car into the Subaru driver’s door, aiming to incapacitate the driver. 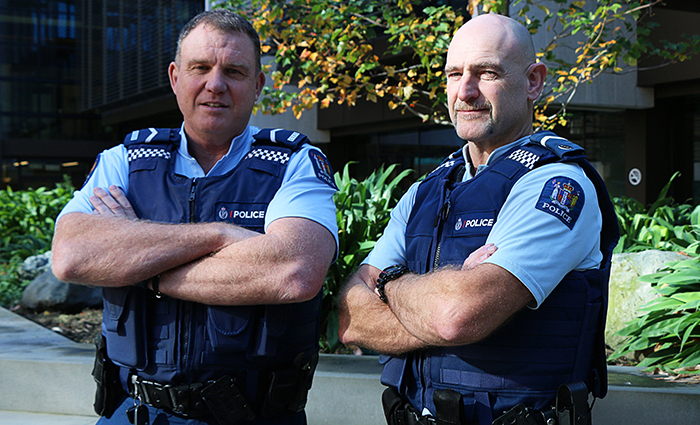 “I was thinking ‘There’s a good likelihood we’re going to die’,” says Jim, left. “But I remember looking across at Scotty and thinking ‘This guy’s got it, I’ve got it, we’ve got it, this is us’.

Jim says he had noticed at crash scenes that when a vehicle hits another at a certain angle, the airbag does not deploy. He now put that to the test, hoping to give Scott a clean exit. It worked.

Scott, who has long experience of Protection Services work and has trained in exiting a moving vehicle, was out of the car before it had stopped. He circled the offender’s vehicle and was surprised to find it contained just the driver.

Jim got out, Glock in hand, into what he thought would be a firefight. But when he saw Scott with his rifle trained on the driver, he realised there must be only one offender present.

There were firearms in the vehicle – they had been across the driver’s lap, ready for use, until the impact dislodged them. However, they were still within his reach. He also had a long-bladed knife attached to his vest.

Scott called for Jim to enter the vehicle from behind and handcuff the driver with his hands up. Jim went around and opened the hatchback and saw what appeared to be four improvised incendiary devices - petrol cans with objects taped to them.

They had to get the driver out without delay, fearing he might be able to remotely detonate the devices. They removed the firearms from the vehicle then Jim reached in and grabbed the driver.

“I remember thinking ‘When he blows up this is going to really, really hurt’,” he says.

No one blew up. Jim dragged the driver out, depositing him on his back on the footpath. “He was squirming a wee bit,” says Scott.

“I noticed his hands were fishing in his vest. I didn’t know if he had a detonator for the explosives, or was going for his knife, or whether he had another weapon concealed in his clothing.”

He considered shooting him because of the potential threat but there was the risk of a ricochet hitting Jim. “So I reversed my weapon and struck him with the butt, with the intention of rendering him unconscious.”

The offender went limp, allowing Jim and Scott to turn him over, handcuff him and drag him away from the vehicle.

Over the next few minutes they both spoke with the offender, seeking information to relay to emergency comms.

The man said there were five, nine or 10 military or police-trained gunmen carrying out coordinated attacks on Muslim targets in Christchurch and nationwide, and 50 around the world.

With more police arriving, the car was cordoned. Scott remained there, helping keep people away and evacuate nearby homes, while Jim and another officer took the offender to Christchurch Central.

Jim went on to the District Command Centre to brief District Commander Superintendent John Price and his team. He returned to the cordon, which was still on alert for other terrorists.

Later they briefed the Army bomb disposal team on what was in the car, and in the evening briefed the CIB leadership team. Eventually they stood down, after a very long day. 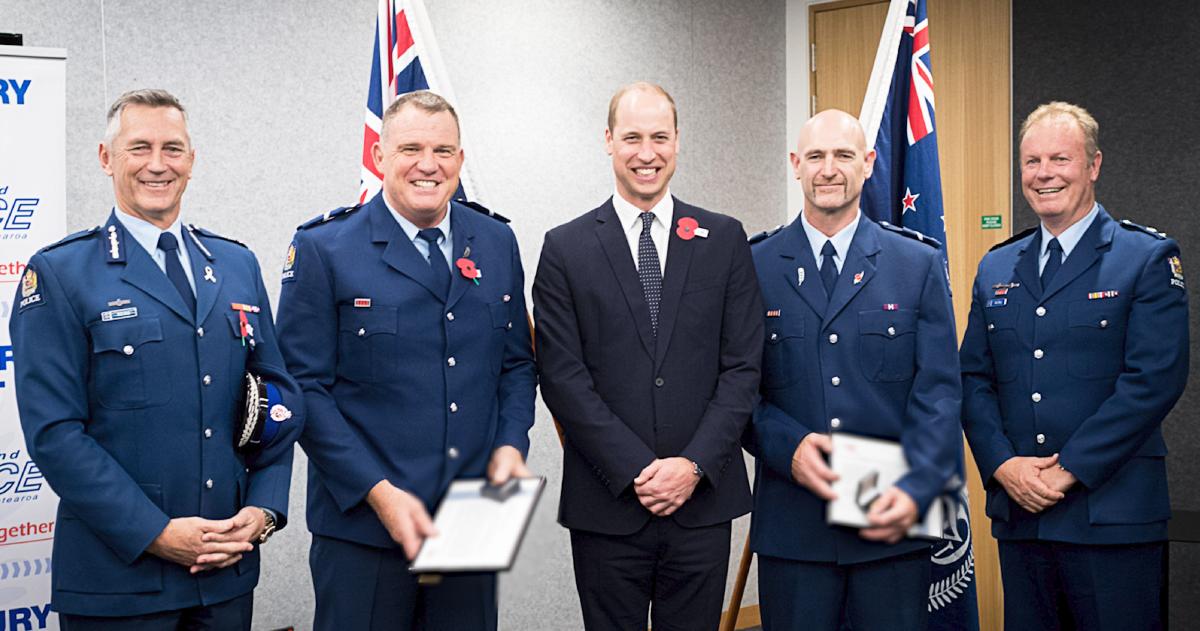 In April 2019, then-Commissioner Mike Bush, supported by Prince William, presented Jim and Scott with Gold Merit Awards for their bravery.

At that point they were still Officers A&B, with court-ordered anonymity which they later asked to be removed.

Scott says they did not want what appeared to be special treatment. “None of the victims had name suppression.

“We wanted to continue to stand with the victims and their families and not hide behind name suppression. If they could be named, so could we.”

Scott literally stood with the victims when the offender was sentenced in June 2020. In his Protection Services role he was at court to help look after the family members making victim impact statements.

No one recognised him. Apart from anything else, he had shaved off his moustache. It was the families’ and victims’ moment, he says, and he had no desire to create any kind of distraction.

If Jim and Scott have any advice to pass on to colleagues, it’s about trust: Trust your training, trust your equipment and trust your mates.

“Scotty kept us alive,” says Jim. “The fact that he got out of that car so quickly… and got to that corner and had that gun at the driver’s head before he could reach across to get his guns is the reason we’re still alive.”

Scott says he had huge trust in Jim. “I knew he was always going to go forward. No matter what happened he wasn’t going to back off.

“I knew wherever we ended up, he would be there; I knew he was fully capable of dealing with whatever it was we had to deal with.”