The establishment of New Zealand Police

In 1840, with the arrival of Governor Hobson in New Zealand, Police Magistrates exercised their power to appoint selected men to act as police. Six years later, on 9 October 1846, an ordinance for the establishment and maintenance of a constabulary force was passed.

This Act described the police force as "a sufficient number of fit and able men who would serve as an 'armed force' for preserving the peace and preventing robberies and other felonies and apprehending offenders against the peace."

The gold rushes of the 1860s in Otago and Canterbury meant police often had a difficult time keeping the peace. After 1867 the Armed Constabulary was also required to fight in the land wars.

In 1958 a new Police Act was passed in which the word 'force' was removed. The name now used is New Zealand Police or Police. 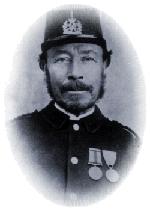 Sergeant John Nash was registered as the first non-commissioned member of the newly formed New Zealand Police Force on 1 September 1886. He had the number '1' displayed prominently on his headgear.

Nash was born in Killarney, Ireland, in about 1822. He sailed for New Zealand in 1845 with the 65th Regiment of the British Army. On leaving the Army in 1857 Nash joined the Nelson Provincial Armed Constabulary as a constable. He was promoted to Sergeant in 1863.

In 1863 John Nash was stationed at Westport during the goldrush. Local businessmen regarded him as an "excellent officer" and a "very steady man", but diggers were disgusted that he actually tried to enforce 10 o'clock closing. Press comment made his rigid disciplinary approach to policing notorious.

By 1866 Sergeant Nash, back in Nelson, was third in command of the Provincial Police Force. He was awarded a gold watch for his work in the hunt for those responsible for the murders of five gold prospectors at Maungatapu.

In 1875 Nash complained of his policeman's lot to the Superintendent of Nelson, saying that his 160 pounds a year was inadequate because "At the present time I am on duty from 7PM to 7AM and in addition to this I have to Summon Jurors for Coroners Inquests, attend the same and also the Criminal sittings of the Supreme Court without any remuneration". His application was denied.

Nash was discharged on superannuation in 1887 after 30 years service, a recipient of the newly struck New Zealand Police Long Service and Good Conduct Medal.

After leaving the police, John Nash became 'Inspector of Nuisances' for the Nelson City Council, a much sought-after position which he won against 29 other applicants. He died in 1893, survived by four children of his first wife, Sarah (nee Newport), his second wife Selina (nee Goddard) and their six children. He had named the youngest - born in the year he became 'policeman number one' - Sargeant John Nash.