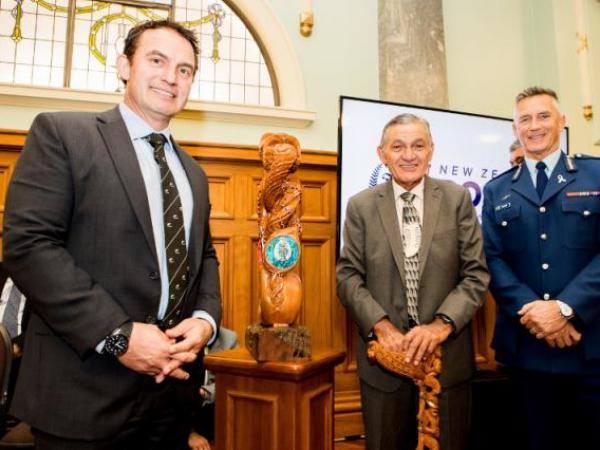 Highlights of Police working towards achieving our goals of 10,000 few victims of serious crime, reducing reoffending by Maori by 25% by 2025 and achieving 90% of high or very trust and confidence in Police by New Zealanders.

Thanks to everyone involved in Operation Notus which was terminated yesterday.

Police’s Asset Recovery Unit has been assisting the investigation team and so have so far restrained over $2 million worth of assets, including residential properties, vehicles, boats, and a jet-ski.

Over the course of the investigation it is estimated that methamphetamine with the retail value of at least $2.1-2.6 million was allegedly sold to the community by these dealers.

This amount of meth equates to approximately $5.4 million in social harm.

As part of the termination we’ve uncovered a number of cases of family harm and child neglect connected to the houses where drug supply is taking place. Sadly, this is not surprising. Our staff are seeing family harm cases overrepresented in houses where organised crime and drug supply are factors.

We’ve also identified a number of end users who will be contacted with ways they can treat their drug addictions, hopefully resulting in an eventual reduced demand for methamphetamine.

Operation Jess – more drugs and firearms off our streets

Earlier this month we concluded the annual cannabis and related-crime operation with impressive results, preventing $418,903,408 in social harm to our communities.

While cannabis is a key part of the operation, other related criminal activity, including burglary, theft and firearms offending was also an important focus for our staff.

This year, 205 people have been arrested as a direct result of this operation. We recovered 85 firearms and referred 12 cases for asset recovery action. A significant amount of cash was seized and stolen property was also recovered.

Great work from everyone involved in this operation.

It’s a significant amount of work every year for districts and continues to be an important and successful component of our commitment to reducing the supply of cannabis and other drugs.

I also appreciate the assistance from our colleagues in the Defence Force who provide the use of their NH90 and crew.

Showing trust and confidence counts at all times

Last week was it was heartening to read about a job where Constables Alistair Ellesmere and John Keoghan from Waikato District finished the plumbing work at the home of a woman whose husband had died suddenly from a suspected medical event.

I want to commend Constables Ellesmere and Keoghan for their empathy and actions. They stayed with this woman until her support network could arrive, and while waiting finished the plumbing job her husband had started – something she may have found difficult to organise in light of what had happened.

I am continually impressed by how staff manage to find ways to make a difference when people need it most. I know this gesture would have been appreciated by the family. Keep up the good work.

Last night Police Minister Stuart Nash hosted Police and our justice sector partners at Parliament’s Grand Hall alongside Iwi leaders to celebrate the ongoing success of Iwi/Justice Panels and to launch “Te Pae Oranga” a concept that imbues the vision and principles of Iwi Panels.

Iwi/Community Panels sees justice sector agencies and community working together to reduce reoffending. They are a reflection and extension of the strong commitment Police has to its relationship with Māori.

The overall aim, shared by Police and by Iwi, is to reduce the number of Māori entering the criminal justice system and, to redirect them to achieving their full potential.

Iwi/Community Panels were introduced in Christchurch in 2010. They were rolled out in Gisborne, Hutt Valley and Counties Manukau in 2013/14, and Auckland City, Waikato and Bay of Plenty in 2017/18.

There are additional panels are currently in the development phase and will be located in Northland, Waitematä, Bay of Plenty, Eastern, and Tasman districts and are expected to be operating by 30 June 2018.

Previous
Policing in our communities
Next
Our courageous Police recruits