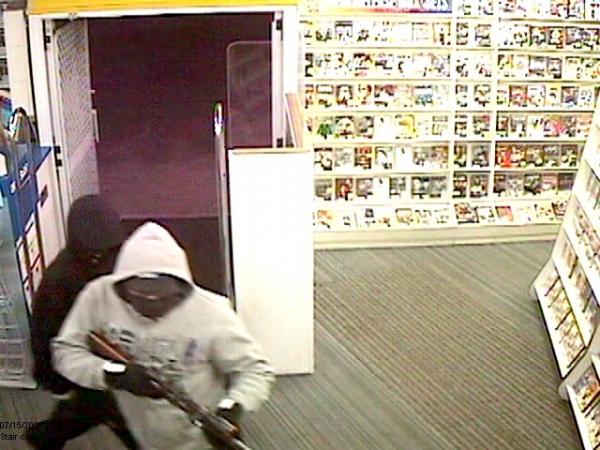 Hamilton Police investigating the armed robbery of a Frankton video store overnight are appealing for information from the public.

"One of the pair was armed with a rifle and threatened the male attendant while his accomplice has grabbed the till and the pair have fled the store on foot with a small amount of cash, heading towards Seddon Rd.

"Our staff are currently reviewing security footage of the incident and we're appealing for anyone with information on the offenders' identities to come forward."

Mr Greene said the rifle used in the robbery appeared to have a telescopic sight on it and it would have been a quite distinctive item for someone to be seen carrying.

The armed offender is described as a dark skinned male, about 165cm tall, of skinny build wearing dark gloves, a grey hooded sweatshirt and blue jeans with a mask or balaclava obscuring his face.

The second offender is described as a dark skinned male, of medium build wearing a dark hooded sweatshirt and black jeans.

Meanwhile Detectives are also investigating the aggravated robbery of a Nawton address early this morning.

Mr Greene said a group of people armed with knives forced their way into a Durham St home about 4am this morning demanding cash and property.

"The offenders have then fled in two separate vehicles and we're appealing for anyone with any information on who was responsible for this incident to contact us."

Anyone with any information on either incident is asked to contact Mr Greene at the Hamilton Central Police Station on 07 858 6200.