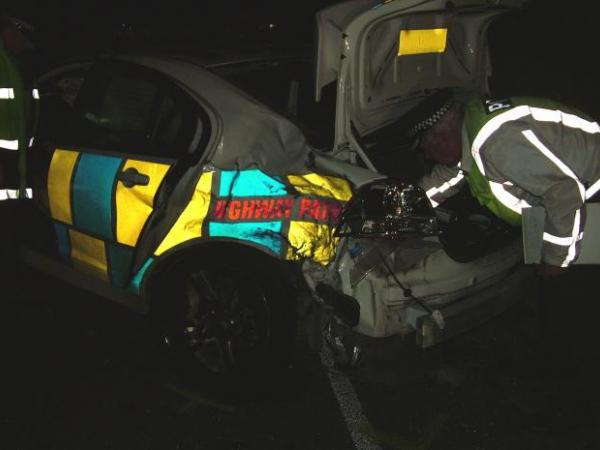 A number of separate investigations are underway in the northern Waikato today following a fatal collision between a Highway Patrol car and a motorcycle near Te Kauwhata yesterday.

"The investigations are in their early stages but initial indications are a Highway Patrol officer driving east from Te Kauwhata towards SH2 detected a vehicle heading towards SH1 approaching him at a speed of about 154km/h.

"Pulling to the left the officer has activated his blue and red emergency lights and sirens and begun a turning manoeuvre to follow the offending vehicle as a motorcycle came over the brow of a hill and collided with the turning patrol car."

The 38-year-old Te Kauwhata man was thrown several metres from the impact of the crash, suffering fatal injuries.

"The man's death has also been reported to the Coroner who will carry out his own investigation to determine the cause of his death.

Describing yesterday incident as a tragedy for not only the deceased's family but for Waikato Police as well Mr Tooman said a thorough investigation was the priority now.

"Road Policing is all about preventing road trauma, unfortunately the nature of our business is such that from time to time tragedies do occur. It is now a priority for us to ensure a thorough investigation is completed not only for the deceased's family's peace of mind but for that of the public and our own staff."

Waikato Serious Crash Unit Investigators will return to the scene this morning about 10am, media wishing voice or face to camera recording should contact the Waikato Communications Manager to arrange visiting the site at about 10.30am.