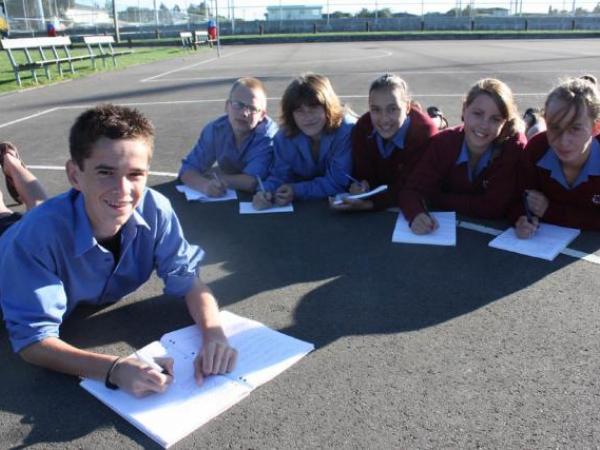 Handwritten letters from students in Feilding have warmed the hearts of emergency service workers in quake-stricken Christchurch.

The letters were prompted by 13-year-old Ryan Harrison, the son of Palmerston North based Inspector Mark Harrison, who is in charge of the family liaison aspect of the earthquake operation.

"Everybody is doing stuff for the people of Christchurch and missing out the emergency service people who are helping out as well," said Ryan, who is in Year 9 at Feilding High School.

He enlisted the support of English teacher David Byrne to help turn his letters idea into reality and then encouraged a couple of classes to join in.

Around 50 letters were written by students, boxed up, and sent south to Mark who then handed them out around Christchurch to Police, USAR, Civil Defence workers and military personnel.

Mark, who also led the family liaison phase for the Pike River Mine tragedy, and as such has spent very little time at home with his own family over recent months, was touched by his son's gesture.

"That's the sort of kid he is. It was a really good thought and once he gets an idea in his head there's usually no stopping him.

"The letters were incredibly well received. There are a lot of us working down here who have kids back home, and to hand out the letters is a good feeling. Driving away from a cordon and watching in the rear mirror as a soldier stands in the rubble reading a letter from a random kid is pretty cool."

Some letters are also displayed on a board at the Emergency Operations Centre (EOC) keeping up the team spirit of the hundreds of staff that continue to come and go through that location every day.

English teacher David Byrne had no hesitation in supporting Ryan's suggestion. "I thought it was a good idea and it's great to see young people with initiative. The letters were written as a morale boost, letting those in Christchurch know that the country is watching, and even in places you may not have heard of there are people thinking of you. There's something about receiving a handwritten letter."