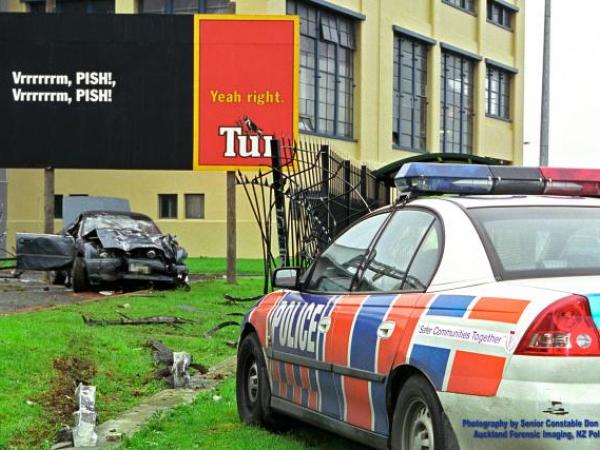 From time-to-time, Police Officers encounter some truly bizarre incidents. This ironic work story started one day when the driver of the offending vehicle was forbidden to drive. Ignoring their ban, they encountered police later that day at a routine checkpoint. In a (significant) error of judgement, the driver decided to flee. A pursuit ensued which lasted less than a minute. The driver lost control and careered through a fence into the billboard. The patrol car was some distance behind the vehicle when it crashed and all police procedures were fully complied with. The driver was not seriously injured but was left with plenty of explaining to do. They made full admissions of responsibility and were convicted on traffic charges relating to the pursuit.

This image is featured on the Police Recruitment Facebook page which invites potential recruits to "caption this".

A police spokesperson says "Apart from providing a striking example of the better work stories you get when working for police, the image also provides a road safety message. It proves that fleeing police, speed, driving disqualified and alcohol are never a good combination."

Police recruitment's presence on Facebook and Twitter is designed to provide potential applicants with an insight into life on the job, including some of it's quirkier moments like this one.

As always, if you're looking for better work stories and you want to take the first step in becoming a cop, go to www.newcops.co.nz and complete an online seminar.