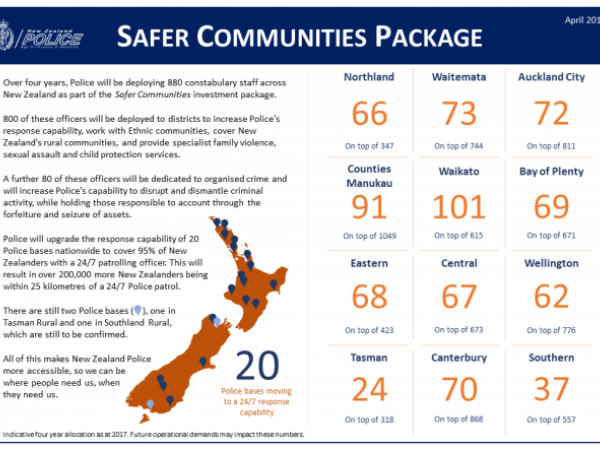 Police Commissioner Mike Bush has today announced the numbers of new Police staff each district will get as part of the $388 million investment in Police announced by the Prime Minister in February 2017.

The investment will see an increase of 880 sworn and 245 non-sworn staff over four years.  Sworn staff will be recruited over the next four years from July 2017, with approximately 220 new additional recruits added per year.

“We have carefully considered where the additional 880 staff should go and where they will make the most difference. Our allocation model has taken into account changing crime patterns, increased demand and population growth,” Mr Bush said.

This investment package provides a significant opportunity for Police to address the pressures facing some of our districts and expand on the work being done to make New Zealand the safest country.”

The first phase includes the recruitment of 220 constabulary staff.  The first wing to include new recruits funded through the investment package, Wing 308, will start on 10 July 2017. These 80 recruits will graduate in October 2017.

“We are committed to meeting the targets set by Government as part of their new investment in modern policing,” Mr Bush says.

“We recognise that our regional communities have different pressures and concerns and feel safer if they know a 24/7 Police response service is nearby.

Today I am announcing the locations of 20 new 24/7 response bases which means that Police’s 24/7 active patrols will expand to cover more than 200,000 additional New Zealanders.

The first four bases to be upgraded to a 24/7 response capability during 2017/18 will be Kaitaia (Northland), Matamata (Waikato), Wairoa (Eastern) and Rolleston (Canterbury).  See below for the full list of bases for the next four years.

Up to 40 of the 140 extra officers earmarked for regional and rural areas will form a Rural Duties Officer Network. This resource will be focused on rural issues, building strong local networks and supporting confident rural communities.

“Over the next four years this investment into the frontline will enable us to put an extra 80 police into organised crime. These will be put into specialised taskforces made up of investigative staff, asset recovery specialists and forensic staff.  The first taskforce will be set up in the Western Bay of Plenty in the 2017/18 year.

A priority for us is to prevent victimisation in families and in the home. We will have 140 new staff to focus on family harm, child protection and adult sexual assault.  We want all families, particularly children to be safe in their homes.

“All of this makes Police more accessible and more visible so that we can be where people need us, when they need us,” Mr Bush said.”

District Commanders will now consider where the new staff are best placed within their districts to target and catch offenders, prevent harm and victimisation and provide a more responsive police service to communities.

“More details will be provided in the coming months around some of the work our new and existing staff will be doing in these priority areas.

Police bases to go 24/7 over the next four years

Please note: A full size copy of the infographic is available here.

An infographic outlining the deployment of Police staff over the next four years. PNG - 160KB
Previous
Keeping each other safe on our roads this Easter
Next
Waikato District boosted by an increased Police presence