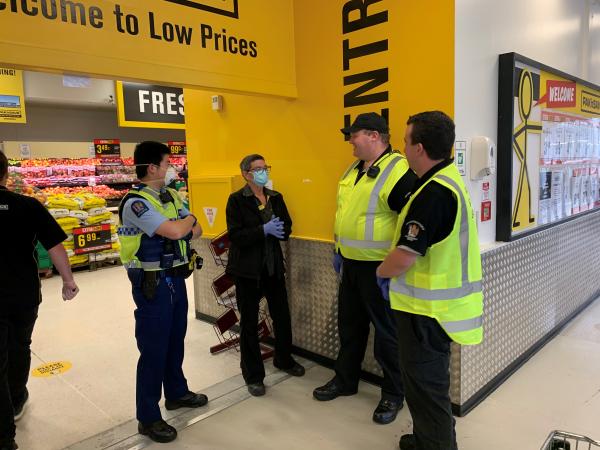 With New Zealand at Alert Level 3, officers from the Aviation Security Service are continuing to work with Police to ensure compliance with COVID-19 restrictions and provide community reassurance.

The reassurance and lower-level compliance checks are now more varied given the ability of a number of expanded business operations allowed to trade.

For the last few weeks at least 270 Avsec officers throughout New Zealand have been working alongside Police to conduct reassurance patrols at supermarkets, and carry out compliance checks at quarantine and isolation centres.

The Avsec teams are drawn from airports in Dunedin, Queenstown, Christchurch, Wellington and Auckland.

“Our staff are deeply committed to keeping Kiwis safe, whether that’s in the sky or in their bubbles.”

Ms Urwin says the safety of all Avsec staff is a priority.

“Our officers will not be deployed in situations that may put their safety at risk. Before they were deployed they took part in a special induction programme complemented by on-site and pre-deployment briefings.

"They also have access to Personal Protective Equipment when needed.”

Auckland Central Area Commander Superintendent Karyn Malthus says these men and women are already well versed in dealing with conflicting views between the public and officials.

“In my view this makes them a good choice to work alongside us. They have been instrumental in ensuring high visibility of staff at our local parks, beaches and supermarkets.

"We are very pleased to be working with Avsec and have enjoyed their team spirit and ‘can do’ attitude,” she says.

"Avsec staff deployed into districts have this week been redeployed to our quarantine and managed isolation sites (hotels) in Auckland City and Counties Manukau District.”

“Over the course of one week, they spoke to 964 members of the public, educating them on COVID-19 related matters.

"Any issues they identified were reported back to Police,” he says.

“One of these patrols last week arrested a woman after three warnings for breaching Alert Level 4 restrictions.

"There’s been further good work locating errant mountain bikers at Signal Hill, and surfers and paddle boarders breaching restrictions at Ocean View last week when we were at Alert Level 4.

"The teams have been working together extremely well with high visibility foot patrols at essential services such as supermarkets and pharmacies and this will be extended now to all the other open businesses at Alert Level 3.”

“They are a professional, uniformed body of talented officers who come to work every day to ensure the safety of the community, and we are asking them to continue keeping the community safe from harm, no longer in the sky above but on the ground.

“They are filling the role of capable guardians — the black uniform, like the blue uniform we wear, says to the public you will be okay and we are here to protect you, your family and the public.”