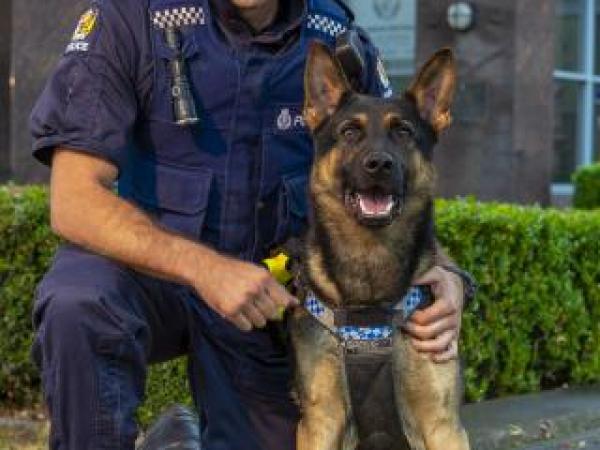 Home > News > Catch of the day, and night

Dunedin’s Constable Marcus Saunders and his patrol dog Vann have won the Erridge Cup, which is given to the top performing rookie dog team in the country.

Only becoming operational on 23 August 2018, the Southern pair have had a stellar start.

From then until the beginning of April they’ve made 41 tracking catches, 42 arrests, and seven pre-warning arrests; laid 80 charges; issued 98 infringement offence notices; and carried out 86 bail checks.

Nominations for the Erridge Cup for the best first year dog handler are sought nationally from Dog Section supervisors and decided at their annual seminar being held this week at the Police Dog Training Centre, Trentham.

“This prize is well deserved as they’ve had an outstanding first year. They represent the success story of the Dunedin Dog Section and the fantastic work they’ve been doing for the District.”

Southern District Commander Superintendent Paul Basham said the achievement is a triumph for the pair and the entire district.

“This is a very impressive accomplishment by Marcus and Vann. This award rightly recognises their professionalism and is a reflection of their commitment to our communities.”

“I’m very proud of our dog teams across our district. Both our handlers and their patrol dogs are tenacious and are dedicated to catching offenders and reducing victimisations.”

Constable Marcus Saunders is keen for the praise to be directed to his partner.

“I’m lucky to have such a good dog. He’s the one that deserves all the credit.

“Dog Section traditionally attracts people who’re highly motivated and I am just fortunate to have a spot. I strongly encourage others to join the Police and become a Dog Handler – it’s a great job.”

Just in the past couple of weeks Marcus deployed Vann to apprehend a man holding a knife. The offender was a fleeing driver who was using the weapon to threaten fellow officers.

On another job, they tracked and caught two robbery suspects who’d run off after fleeing Police in their vehicle. Marcus chased and caught one offender before handing them over to PST. Deploying Vann, Marcus then tracked the second offender, who was found hiding in a backyard.

Nominating Marcus and Vann was Dunedin’s Dog Section supervisor, Sergeant Mike Calvert, who was impressed with their big picture approach to policing the communities they serve.

“While on patrol, Marcus also has a strong focus on reducing death and injury on our roads. This is evident by his productivity in Road Policing.

“He performs at an exceptional level in both his dog handling duties and overall policing.”