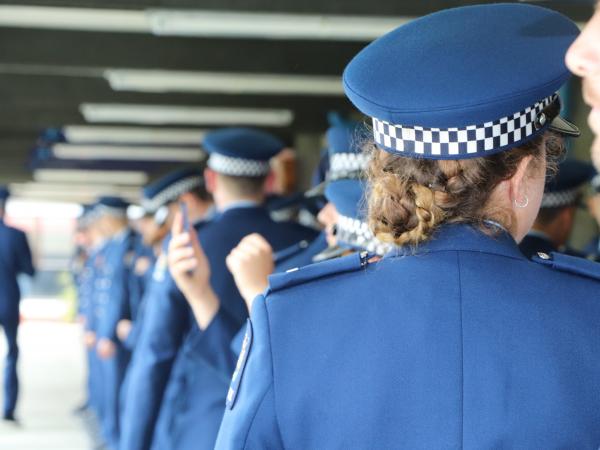 Seventy-six recruits will be attested as constables and graduate from their initial training on Thursday.

The wing members will be deployed to every Police district in New Zealand.

They are a diverse group of people who have worked in roles such as Corrections and Customs officers, a trekking guide and industrial abseiler, plumber, chef, and a past member of the Black Ferns.

Recruit Linda Itunu represented New Zealand in the Black Ferns for 17 years, playing in both the 15s and 7s format of rugby and captaining the Barbarians team in 2019. She has competed in six Women’s Rugby World Cups and has been a member of a World Cup champion team four times. Her highlights have included receiving the Sir Fred Allen Award for Auckland Rugby in 2019 and being part of the team that was named the World Rugby Team of the Decade in 2020.

Linda hung up her rugby boots in 2019 to pursue a Police career. She says she’s joined Police to be part of a high-performance team, a role model to her nieces, nephews and Pasifika communities, and to work for a safer and better New Zealand.

Linda will be posted to Waitematā District.

Recruit Gary Mitchell JP has been a member of Police for nearly a decade, previously working as a custody and authorised officer in Wellington District, where he will be posted after graduation.

During his time as an authorised officer and previously as a Corrections officer, he earned numerous awards, commendations and certificates from Police, including a Police Woolf Fisher Fellowship, and from the Department of Corrections, such as its Minister’s Award for Excellence.

As a British Royal Navy veteran Gary has also been commended in the past for bravery and for saving a life.

He says he’s making the move to a constabulary role because he’s looking for a new challenge, and wants to broaden his horizons while gaining new skill sets.

He supports Police as an advisor to Commissioner Coster on his Ethnic Focus Forum, which guides Police’s strategy for effective policing with New Zealand’s diverse communities.

The wing will be posted to districts as follows.

Also look out for a Ten One Magazine story that will be published, with photos, on the Police website.