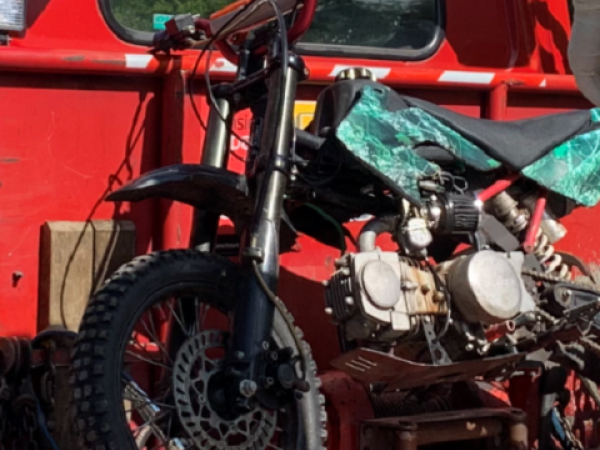 Police have seized the motorbike of a youth who had been riding dangerously around parks and neighbourhoods in Bader, Hamilton.

"This is a stressful time for New Zealanders and there are more pedestrians and cyclists out and about. The last thing anyone needs is a dangerous motorbike rider in their neighbourhood putting them and their bubbles at risk," says Inspector Andrea McBeth, Area Commander: Hamilton City.

In the afternoon of 7 April, Constable Tom Pearse of Hamilton City Police was on patrol in the Bader area when he spotted a motorbike riding in circles on Norrie Street. The rider had no protective gear.

Constable Pearse attempted to stop the rider, who fled and nearly hit an oncoming vehicle before riding on the footpath and into a local park.

The officer began making enquiries around the neighbourhood, and was able to identify the rider.

On 9 April, a warrant was executed at an address in Bader and a dirt bike was seized.

"I hope that this will send a message to these offenders that these kind of offences won't be tolerated in our communities, and that this seizure brings some peace and quiet to the Bader community," says Inspector McBeth.

The offender will be referred to Youth Aid.