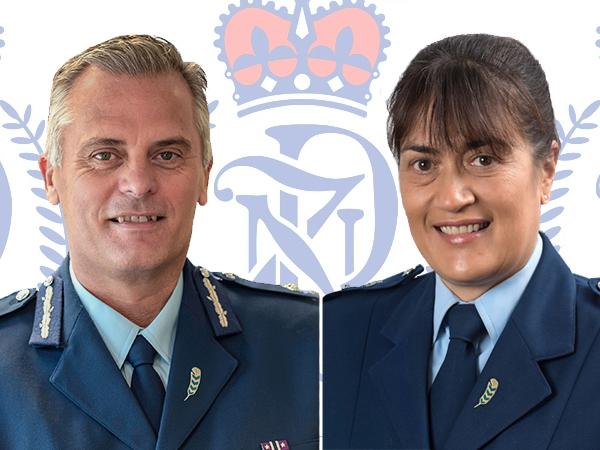 “I am delighted to be able to announce these appointments today.  Both Glenn and Tania have vast experience as serving police officers, and as leaders inside Police.  Ensuring that we have a strong internal Police culture alongside developing our operational capability has been a key focus of our team redesign, and I know they will both make an invaluable contribution the executive team that I lead.

“Glenn will take responsibility for district operations, serious and organised crime, international, and national security. Tania will take on responsibility for employment relations, leadership and training, people capability, safety, integrity and professional conduct.  She will also champion our organisation’s culture priority – ‘Be First, Then Do’.

“Tania is the first female constabulary appointment to a Deputy Commissioner role in the Police executive. She has demonstrated in her current role as District Commander, her ability to lead significant cultural change.  She is highly regarded by the community and her staff and she will be a great asset to the senior executive and wider Police organisation.  Tania’s drive and determination to help shape a great culture within the Police organisation are clear for anyone to see and she sets a high bar example.

“Glenn has been a trusted member of my transition leadership team since returning from Canberra earlier this year, to lead our district operations. He brings a wealth of experience as both a frontline leader, district commander, and previously Deputy Commissioner: Resource Management. He is a wise and collaborative leader who inspires and drives excellence from his team.”

“I am delighted and excited to have been selected for this role.  I wanted to lead this particular area responsible for our culture and people because I truly believe that the culture of this organisation is at the heart of everything we do as a Police service.  Our greatest asset is our people and I really care that our police staff reflect our community, so that we can be better placed to serve in them.  I am a proud Police officer and I am passionate about the organisation culture programme I have been asked to lead as I have a clear vision for the good this can deliver for both our staff, and the communities we serve.”

“I am very humbled to have been appointed to this role. Having a senior role in Police is a big responsibility, but also a big opportunity.  I see it as an opportunity to help make our organisation as ‘people healthy’ as we can get it, to enable the large talented pool of police staff we have to deliver our business for us - keeping our communities safe, and feeling safe.  I am a very proud police officer of 35 years, and I am proud of the thousands of frontline staff who are out there every day, putting their community’s wellbeing first. I am determined to continue ensuring our staff can do their jobs to the best of their ability, so that the public can have trust and confidence in what we do.”

“We announced in June our intention to redesign the executive team structure to ensure we were in the best position to deliver our vision to make New Zealand the safest country.

“We are in the final stages of filling our remaining vacancies with announcements expected in early October.  Those roles take responsibility for corporate operations, and strategy and service.”

NOTE:  As both appointments are provisional subject to Police employment processes, interviews with the new Deputy Commissioners will be not available until after both positions have been confirmed. On confirmation the Police website will be updated.

Glenn started his policing career in Counties Manukau, working his way through CIB into the position as Area Commander in Waikato. In 2010, Glenn was appointed as the Bay of Plenty District Commander. While in position Glenn focused on building a strong, resilient leadership team that successfully imbedded the Policing Excellence transformation programme. Glenn was appointed as Deputy Commissioner: Resource Management in 2014 and in 2017 Glenn took a three-year secondment to work in Canberra with the Australian Defence Department, focusing on inter-agency coordination and cooperation. In early 2020 Glenn returned to New Zealand and took up the role of Deputy Commissioner: District Operations. He first joined Police in 1985.

Tania was appointed to the Eastern District Commander role in July 2017, where she is responsible for 500 people.  She was appointed to that role, after five years as the Hawke’s Bay Area Commander. She has 33 years’ experience, having joined the organisation in 1987.  Tania was recruited from Invercargill and was first posted to Christchurch.  She has since worked in four policing Districts - Central, Bay of Plenty, Royal NZ Police College and Eastern. Her career covers a range of areas including general duties, criminal investigations, youth, intelligence, O/C station, operational field training and Area Commander. Throughout her career, Tania has relentlessly focussed on the development of her people and building a strong, positive culture.  Born and raised in Invercargill, her whakapapa links her to Tainui.