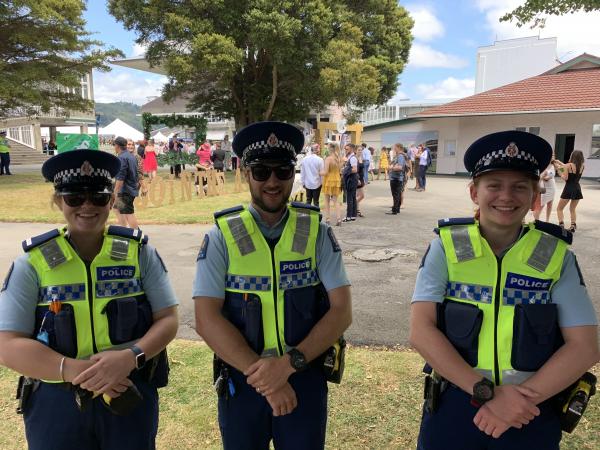 Thirty Wellington district police staff were rostered throughout the day on Saturday, and were gathered from Hutt Valley Police to keep the punters safe at the Wellington Cup race meeting at Trentham this past weekend.

Despite their best efforts at getting the message home, there were a few that simply “over-did it,” says Hutt Valley Area Response Manager, Senior Sergeant Haley Ryan.

“Only two arrests were made for disorderly behaviour after the races, she said, however 15 people were evicted, six tested positive for driving while intoxicated and a man was also taken to hospital with a suspected heart attack.

A number of race-goers spoke to Senior Sergeant Haley Ryan during the day and expressed their approval seeing Police mixing with the attendees and creating a really positive atmosphere.

KiwiRail put on extra trains which large numbers of people took advantage of, however our Road Policing Team were disappointed to find a number of drivers were still drinking too much during the day.

“It’s disappointing that although we screened over 1,000 drivers at checkpoints near Trentham, 59 of them had to undergo evidential breath screening tests resulting in six of them being charged and summonsed to court later,” she says.

“Despite this disappointing road policing result from the races, says Haley, it’s good to see the majority of people looking after their friends on race day, arranging rides for each other and enjoying themselves without needing to overindulge.”