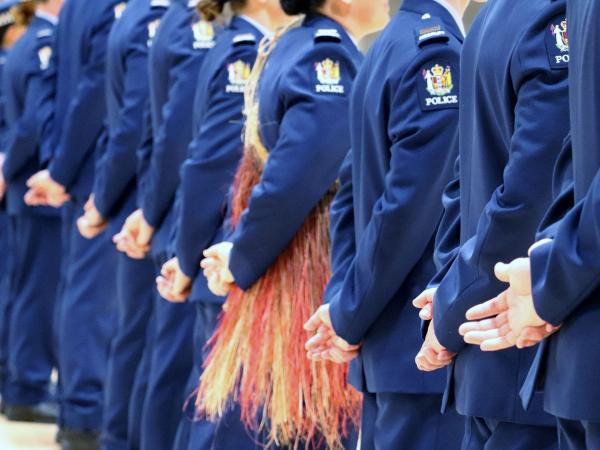 The wing has the highest proportion ever of Māori in a wing, with wāhine Māori recruits strongly represented. Of the Wing’s 71 graduates, 42.3 percent are Māori, including 23 wāhine Māori. Just five years ago Police’s entire annual intake of wāhine Māori was 22, now we’ve managed to surpass that in one wing.

The 23 wāhine toa whakapapa to at least 15 iwi and bring a huge variety of life experiences, which will benefit the communities they will work in across Aotearoa.

Deputy Commissioner Tania Kura says the diversity we see in this wing will help build on the better outcomes for our communities that Police are seeking.

“I’m very proud of the wāhine toa in this wing for their courage, hard work and determination. They know exactly why they’re here, and that’s to work to make a difference in their communities and iwi.

“Some graduates have experience across their wider whānau of crime and trauma. That has driven their desire to help people in positive ways and to use what they have learned to help others.

“Having more Māori – and particularly wāhine Māori – in Police will make a significant difference to our work with Māori in the community, and help us achieve our aim of truly fair and equitable policing.”

“This Wing 355 milestone has come about as part of Police’s ongoing effort to diversify its workforce to demonstrate commitment to Māori and the Treaty, and to best connect with our communities to prevent crime and harm.”

Wing 355 patron Arihia Stirling QSM says Police’s cultural responsiveness has long been a key focus for her and that the wāhine Māori recruitment drive is a great step forward.

“I’m delighted at the increase of Māori recruits and of Māori women. However most important for all recruits, regardless of age, gender and race, is that there is sustained cultural responsiveness by them, the Police and the Crown.”

Recruit Lucy Bean (Ngāti Awa) will receive the Minister’s Award at the ceremony for coming top of the wing. Lucy graduated from university last year with a Bachelor of Science in psychology and criminology and says she’s always known she wanted to join Police.

“I chose to pursue a career as a police officer, because I want a job that is fulfilling and provides an active lifestyle. I want to come home from work and know that I have made a positive difference to someone’s life or helped someone out in some form.”

The wing’s Leadership Award winner is Recruit Alfred Houghton (Te Arawa, Te rohe o te Waiariki (Bay of Plenty), and of Rarotongan descent). Alfred is originally from Rotorua and will be posted to Waikato District after graduation.

Being a police officer has been his life goal, but on the way there he’s been a chef and has been part of Te Mātārae I Ōrehu, a prominent Māori performing arts group.

“You shouldn’t give up on what you want and have dreamed of, because it can change lives and inspire many more to succeed.”

He has also received the wing’s Physical Training and Defensive Tactics Award at a separate ceremony.

Media:
Media are welcome to attend the Graduation Parade which takes place at Te Rauparaha Arena, Main Arena, 17 Parumoana Street, Porirua. The ceremony starts at 2.00pm on Thursday 30 June. Any media wishing to attend the graduation should contact the Police Media Centre by 10am Thursday at media@police.govt.nz
Also look out for a Ten One Magazine story that will be published, with photos, on the Police website.