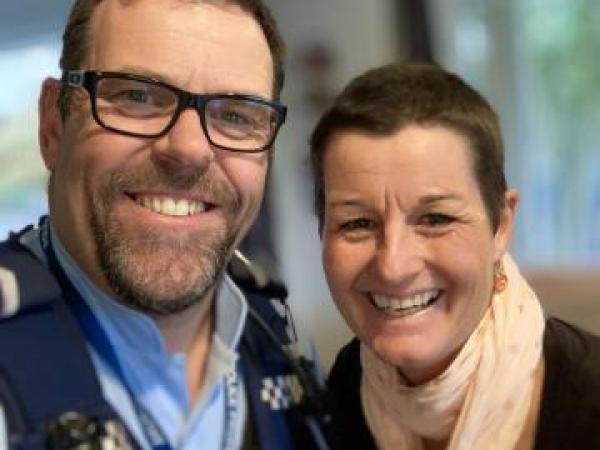 An avid Silver Ferns supporter will still get to see her team play after making a miraculous recovery.

Carol Davison was seriously injured by a vehicle while crossing the road in the early hours of Sunday 7 April.

Senior Constable Newman says his first thoughts were that it was a serious crash.

“As a witness I provided help immediately and ambulance was there within two minutes."

Ms Davison was transported to Christchurch A&E and put into an induced coma.

“Police and medical staff were so concerned about her prognosis that we completed necessary paperwork for the Coroner in the event Carol passed away during the night,” says Senior Constable Newman.

“We’re very pleased to report that she's made a miraculous recovery and is looking at returning to her teaching job next term.

“Due to her injuries, it’s been recommended that she doesn’t go ahead with her planned trip to the UK, supporting the Silver Ferns at the netball world cup.”

Senior Constable Newman made contact with Netball New Zealand to explain the situation.

“Netball New Zealand have offered two tickets for the Silver Ferns vs Australia game at Christchurch’s Horncastle Arena in October,” he says.

"The fast response of emergency services during the accident, the attentive hospital staff who aided in her recovery, and Netball New Zealand’s offer for tickets to a local game is phenomenal.”

Ms Davison says she’s extremely grateful for the Police, ambulance crew and the hospital for their amazing support and help.

“I want to give a special thank you to Craig. I might not have made it if he didn't get me in the ambulance as quickly as he did,” she says.