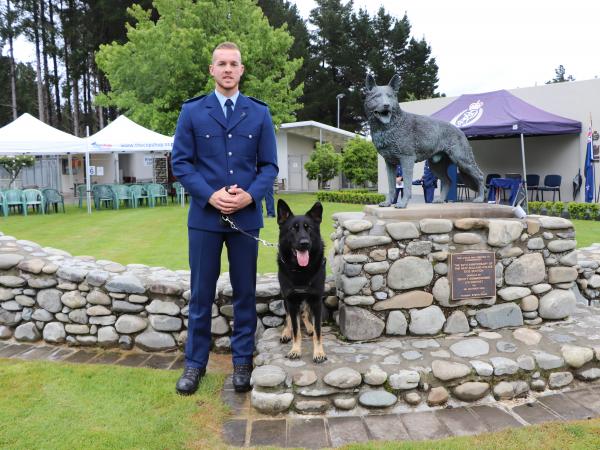 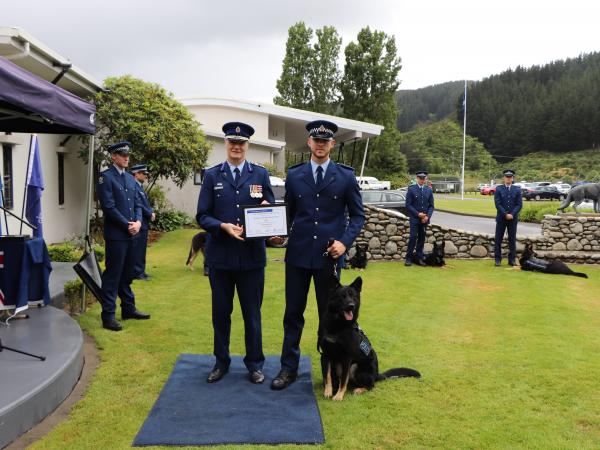 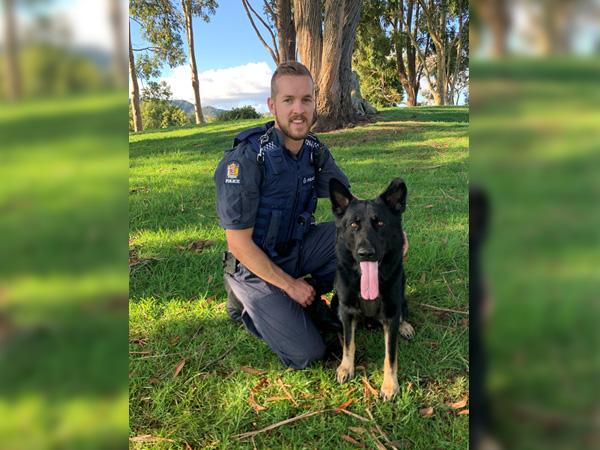 When Caesar was 20 months old and had only been working operationally with first-time handler Josh for two weeks, he was stabbed twice in the head by a man who was resisting arrest.

Luckily both wounds were stitched up and an X-ray showed no major damage.

He underwent a CT scan in the days following the 22 December 2018 incident to confirm there was fortunately no permanent damage around his eye.

The duo have since then quickly proved their worth.

Sergeant Bruce McLeod, officer in charge of the Police Dog Section in Northland, nominated the pair for the award which is judged nationally at the New Zealand Police Dog Training Centre.

“In the 12 months since graduating the team have attended 494 deployments together.

"They have had 18 crime catches where, thanks purely to the skills of the handler and dog acting alone, they have tracked and caught offenders who without them would not have been found, and have apprehended a further 22 offenders.

"Constable Van Der Kwaak has also had 26 patrol catches which have been prepared for prosecution.

“These excellent results have been achieved while Josh and Caesar have been based in the Mid-Far North, a largely rural area,” Sergeant McLeod says.

“Constable Van Der Kwaak is regularly called on to assist frontline staff in the rural areas when staff are on leave and he takes pride in encouraging junior staff to target local offenders and targeted patrolling.

“He assists with the foster pups in the district and makes himself available to help with training and looking after pups when required, and is well-known for taking part in school dog displays, A&P shows and community events.”

District Commander for Northland, Superintendent Tony Hill says, “This is an outstanding achievement and a great way to demonstrate the resilience of both Josh and his dog to have bounced back from the Parua Bay stabbing which could have seen an end to Caesar’s career.

“I am proud that they are being recognised as being the best in the country for the first operational year.

"Congratulations to Josh and Caesar and thank you for your contribution to the Police, and the Northland community.”

Constable Van Der Kwaak says he was “pleasantly surprised” to hear of his win.

“I’m fortunate to have a job I love and this award is an unexpected bonus.”

With a week of night shifts ahead of him, there’s little time to savour the award – apart from a special pat for his canine counterpart.

“My aim is to keep learning and achieving to the best of my ability.”

“The Erridge Cup is highly respected and sought after in the New Zealand Police Dog Section and Josh and Northland District can be very proud of this team’s outstanding achievements.

“Josh and Caesar’s passion and contribution for their role has been evident with involvement in a wide range of successes and hard work.

"Caesar’s stabbing and the efforts around this incident was also recognised with a District Commander’s commendation.

“Their efforts have been amazing and the Erridge Cup has definitely gone to a top notch team,” he says.

You can read about the stabbing here