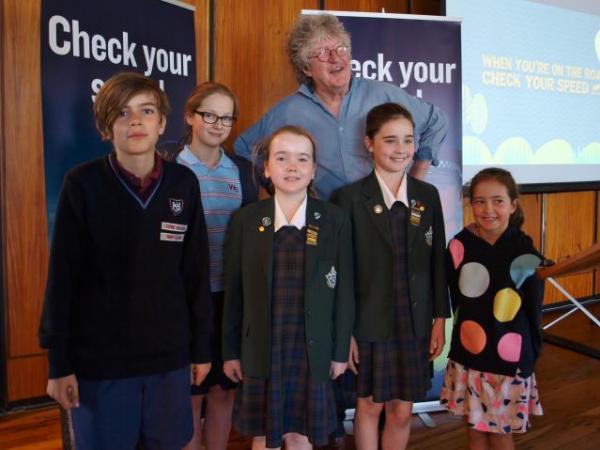 The voices of children and the power of poetry are adding to the call to reduce serious injuries and deaths on our roads this summer.

Today at The Boatshed in Wellington, Police, in conjunction with ACC and other road safety partners, announced a national Holiday Haiku competition based on the road safety message “check your speed”.

“Anyone who has driven with children in the car knows how much weight their voices can have in getting you to slow down. How can you argue with ‘we’re scared, slow down mum…’ or, ‘you’re going too fast dad!’ says Assistant Commissioner Road Policing, Dave Cliff.

“If you are going too fast, or if the kids feel scared they will soon tell you. They seem to be very clear on the fact that driving too fast is dangerous and they just want to get to their destination safely and get on with having fun.

“By asking children and the general public to write haiku to express how they feel about getting to their destination safely this summer, and about those who choose to drive over the speed limit and put all of us who share the road at risk, we hope to bring road safety to the forefront of everyone’s mind this summer.”

Children from a number of Wellington schools read their haiku at the launch and pre-eminent poet Sam Hunt also added his voice to the campaign, reading his ‘Collision’ poem at the launch.

Police will maintain a highly visible presence on the roads over summer and will be using a range of tactics. This includes focusing on those who choose to drive above the speed limit, those not buckled up, and those driving while impaired, with random roadside breath testing.

“On long road journeys, eagerness to get to your destination may encourage you to drive above the speed limit. However, in road crashes, speed can be the difference between a minor injury and a major one. Plan ahead to account for distance, road conditions (increased traffic) and taking regular breaks to avoid driver fatigue if sharing the driving isn’t an option,” says Stuart Ross, ACC Road Injury Prevention Manager.

Like previous summers, speed cameras will be positioned in high risk crash areas and set to enforce a reduced speed threshold of 4km/h from 1 December 2016 to 31 January 2017.

“It’s been a traumatic year on the roads with many families, communities and emergency services feeling the devastating impact of crashes. Police and their road safety partners will be working hard this summer to avoid further road trauma, but we need the public’s help to do so, says Assistant Commissioner Cliff.

“Please check your speed and drive to the conditions, don’t drink and drive and remember to ‘buckle up buttercup’.”

Further information:
• Footage from today’s launch can be found here: https://youtu.be/pqZDbmUF_tE
• The attached photo shows poet Sam Hunt with the Wellington school children who read their haiku at today’s event: Frank Cross, Isabelle Douglas, Louisa Boyer, Kate Davies and Ruby Dacombe-Bird.
• Drivers will see billboards around the country asking them to ‘check your speed’.
• The Holiday Haiku competition opens on 1 December 2016. Entries close on 25 January 2017.
• Budding poets can enter online using the following link: z.co.nz/haiku or by emailing holiday.haiku@police.govt.nz or by posting their poems to: Holiday, Haiku, NZ Police, PO Box 3017, Wellington.
• Entry forms will also be available through AMI Insurance
• There is no age restriction for entries.
• Haiku are short three-line unrhymed poems with traditionally a 5-7-5 (17) syllable structure
• Prizes for winning haiku are being provided by Z Energy
• There will be three weekly winners drawn for duration of the competition. From these 24 winners, five top haiku will be chosen by well-known poet Sam Hunt and rewarded with Z Energy summer hampers.
• Haiku will be used for social media content and radio advertising, with a reminder to check your speed.