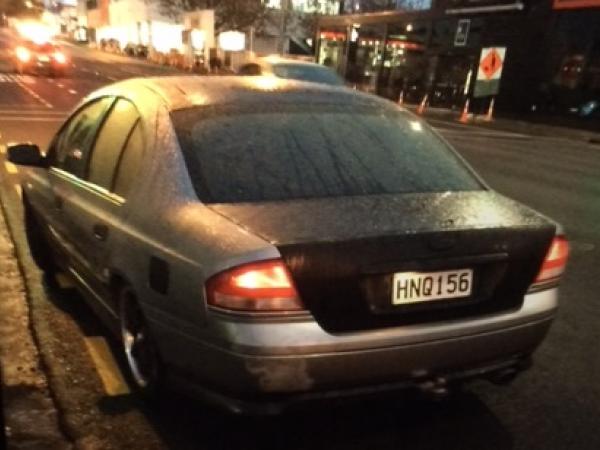 Police are appealing to the public to help find the vehicle that was involved in an incident where a woman was forced into a car.

At approximately 7:10am on Tuesday 12 June, 2017 a silver Ford Falcon, registration HNQ156 pulled into a bus stop on Broadway in Newmarket (near the intersection of Broadway and Manukau Road).

Several members of the public witnessed a man forcing a woman into the car.  It then drove away towards Manukau Road and it is unknown where it went from there.

The silver vehicle has a distinctive black boot which may help someone recognise it.  It also has a black fuel cover and black alloy wheels with a silver rim.

Police believe the man and the woman may be known to each other, however we have concerns for her safety and would like to talk to her.

At the time, Police received several calls from alarmed members of the public and responded quickly but were not able to locate the car.  A witness photographed the car before it drove away.

An investigation is underway and Police have made a significant number of enquiries, however have not yet been able to identify the woman involved or locate the vehicle and are seeking assistance form the public

“The circumstances of this matter are somewhat alarming and we need to locate and speak with the woman and ensure she is safe.  We would like to hear from anyone who knows of the whereabouts of the woman or the car.” said Detective Senior Sergeant Glenn Baldwin.

She is described as being of medium build with an athletic physique and approximately 165cms tall.  She is of Maori or Pacific Island decent with long brown/black hair which was tied back in a ponytail.  She was wearing a turquoise sweater and is estimated to be in her 20-30s.

The man is described as approximately 6 foot, heavy/solid build and of Maori or Pacific Island descent with short dark hair.  He is estimated to be in his 30-40s and has a distinctive tattoo on the left side of his neck.  He was wearing a light top and dark coloured pants.

If you have any information that can help Police with their inquiries please contact Auckland City Crime Squad on 09 3026 557 or alternatively you can provide information anonymously to Crimestoppers on 0800 555 111.