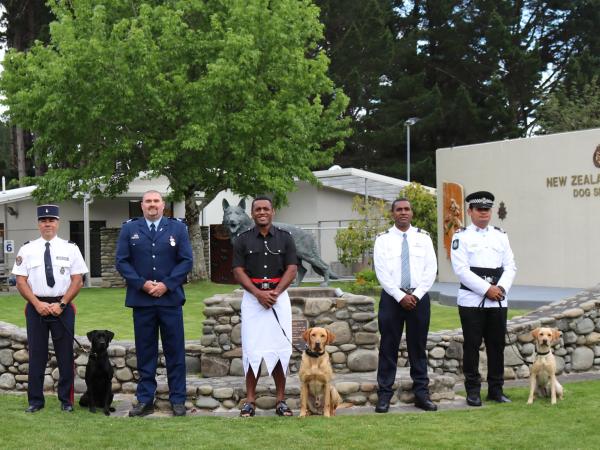 “It’s a proud day for the graduates and for all of our agencies, highlighting the value we place on working together to protect our borders and our communities,” says Inspector Todd Southall, National Coordinator of New Zealand Police Dogs.

The ceremony was hosted by New Zealand Police at the Dog Training Centre in Trentham and attended by officials and guests.

“While these four teams have now been operational with Customs, based in Auckland and Christchurch, over the past year, it has been wonderful to have them all together to share their graduation.”

Chief Customs Officer, Dave Huff, who works closely with his New Zealand Police counterparts to support border and enforcement capability in the Pacific, adds that it is especially significant to share today’s formalities with graduates from the Pacific Detector Dog Programme and the graduates from the separate programme of support to French Polynesia Customs and the Gendarmerie.

“Detector dogs are an additional and vital layer of protection used by enforcement and border agencies both here in Aotearoa New Zealand and our counterpart agencies in the Pacific.

“The NZ Police and NZ Customs Pacific Detector Dog programme has been running for six years now and we are proud of the close collaboration we share with all of our partner agencies in the region. These international partnerships will enable us to continue the fight against transnational organised crime groups which target our Pacific region,” Mr Huff said.

Inspector Todd Southall says the partnerships are effective at both the operational and strategic level, and New Zealand Police was very pleased to support, host and train handlers from the Pacific agencies. NZ Police also supplied the dogs from the police detector dog breeding programme.

“It’s been a busy and demanding nine weeks for the handlers but they’ve risen to the challenges, including changeable weather,” he says.