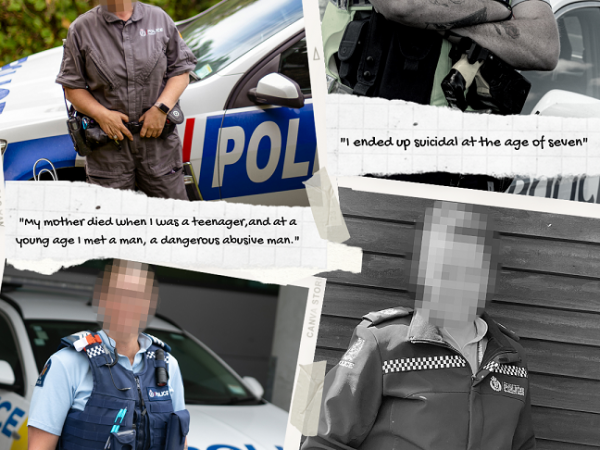 Five police officers have taken a unique stand to publicly share their own experiences of being victims of violence on White Ribbon Day.

Today (25 November) is the international day against violence towards women. The day acknowledges men who promote healthy, respectful relationships and consent.

White Ribbon Ambassador and Commissioner of Police Andrew Coster says some of our police staff are doing more than wearing a white ribbon today.

“Five of our people have chosen to share publicly their own deeply personal experiences as victims of violence. Like everyone who does this, it’s an incredibly brave move.

"Another group of police staff from Eastern District have come forward anonymously to shine a light also, and I commend both groups for their very public declarations,” Commissioner Coster says.

“Police officers are not immune from these types of experiences. We are part of the wider community and unfortunately that means some of our people will be victims of violence.

“But hopefully by sharing their experiences, they will make it easier for victims of similar violence to come forward and seek help.”

In New Zealand, most violence by men against women takes place in the home – with an average of 14 women a year killed by their partners or ex-partners.

Each year there are more than 3,500 convictions recorded against men for assaults on women and one in five women will experience sexual assault or sexual interference at some point in their lives.

*Genevieve, a Senior Sergeant talks about a violent boyfriend and how he forced her to have an abortion. *Charlotte, a Sergeant, describes how she was strangled and had her arm shattered by her abuser before leaving the relationship and pressing charges. Transgender Constable, Gwydion, describes how he was raped by a friend.

Forensic Officer *Felicity recalls a life like the movie Once were Warriors and how she received beatings from her abuser and one day thought she would die.

Detective Jaimie Leigh spent time in Cholmondeley Respite Care Home for children when her parents separated, and she endured psychological harm from an angry and abusive father. At that time, Jaimie didn’t know her dad had suffered historical sexual abuse as a pupil at boarding school when he was a boy.

All these staff have been the victims of gender-based violence and share their experiences and journey out of their violent relationships to a better life and how their lives changed after joining Police. You can read their stories, in their words, here.

Eastern Police District has empowered some of their staff to come forward and share their childhood experiences of growing up in violent homes.  Their voices have been altered to protect them and their families’ identities, as they wish to share their experiences anonymously. You can listen to their stories, here.

“Family violence is one of our country’s biggest problems. The Joint Venture to Eliminate Family Violence Sexual Violence, of which Police are a part, signals our intent to eliminate this problem in Aotearoa New Zealand,” Commissioner Coster says.

This work includes Police hosting integrated safety response (ISR) teams in Canterbury and Waikato. They take a whole-of-whānau approach that prioritises the needs of the whānau. The teams have dedicated staff, access to specialist services and an intensive case management approach to collectively working with high-risk families.

In other parts of the country, Police partner with iwi and community organisations within Whāngaia Ngā Pā Harakeke (WNPH), a concept underpinned by collaboration and taking collective responsibility for the community.

A common feature of this work is providing dedicated Police constabulary staff who work with kaiāwhina/kaipupuri (social workers/advocates) and partner agencies to support families and whānau at risk of harm, putting their voice at the centre of everything.

“Both these initiatives have had a significant impact on reducing harm and we can be proud of the work to date, while acknowledging there is still more to do,” says Commissioner Coster.

In the 2021 campaign, White Ribbon aims to link together resources and information to help show the diversity of the issues at stake and to offer ways to effect change.  White Ribbon Organisation is already promoting healthy ideals within their Respectful Relationships framework.

If you suspect someone close to you is a victim of family violence or feel something is not right, it’s okay to act on it – you could save a life. Call 111 or visit www.police.govt.nz/family-violence-help

MEDIA TO NOTE: Three of the names of our victims have been changed to protect people’s privacy Pursuant Privacy principle 11 (IPP11)