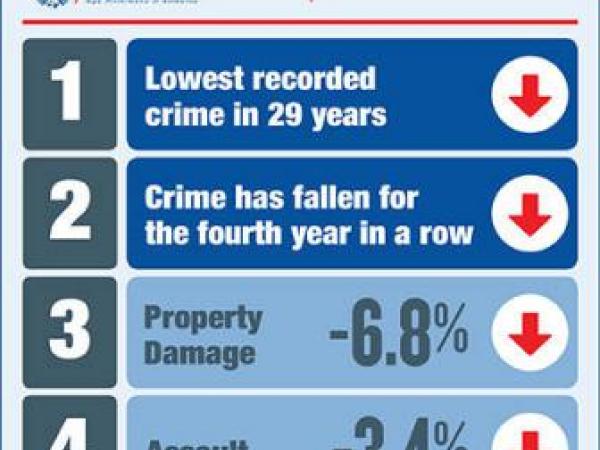 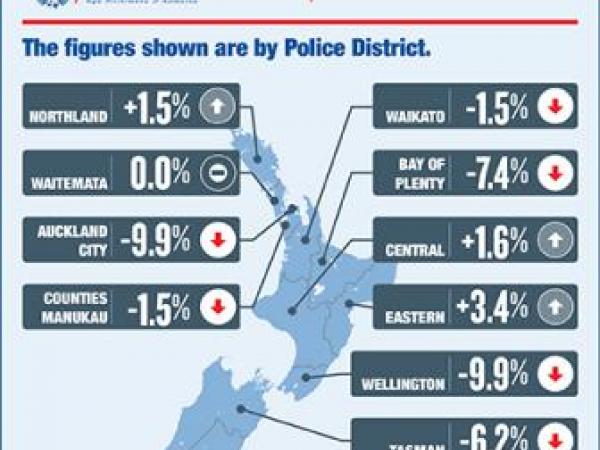 Criminal offences dropped by 4.1% in the last calendar year according to figures released today by Statistics New Zealand.

The 4.1% drop is even more significant given that the population grew by 0.9%. This means per head of population offending dropped by 5% in 2013.

"We're delighted with the 4.1% drop," Mr Bush said. “We are deploying staff more efficiently and pro-actively to ensure Police are in the right place at the right time to prevent crime from occurring.”

“In 2013 we conducted over 104,000 foot patrols across New Zealand. Frontline officers are now spending an extra 30 minutes per shift out in communities preventing crime.”

“The sharp reduction in public place assaults is a great example of how our Prevention First strategy is making our communities safer.”

Nine of the twelve Police districts recorded decreases in recorded crime. Auckland and Wellington Districts recorded the biggest reductions at 9.9%, followed by Bay of Plenty at 7.4% and Southern at 6.6%.

Recorded crime in the Canterbury Police District fell by 5.6% reversing increases that occurred when the Christchurch rebuild began.

“The results in Canterbury are particularly satisfying. The significant drop in recorded crime in the district shows we've maintained the positive gains we made in the post-earthquake environment through proactive policing and a strong focus on crime prevention,” Mr Bush said.

In terms of criminal categories dangerous or negligent acts endangering persons dropped by 23%, public order offences reduced by 15.7% and property damage and environmental pollution offences were down 6.8%.

In contrast sexual assault offences rose by 11.6% in 2013 but Mr Bush believes this is likely to be due to increased reporting.

“We know that sexual violence is under-reported, and we are heartened that more victims of this type of crime are coming forward,” Mr Bush said.

There was also a 22.7% drop in illicit drug offences in the 2013 calendar year. Most of this reduction was in cannabis cultivation and possession. There was a 59 % increase in the import or export illicit drugs offence category. This was the result of Police’s targeted campaign against organised crime groups that control large parts of the New Zealand methamphetamine drug trade.

“Unfortunately methamphetamine is not going away. Police will continue to commit resources to disrupt supply and reduce the harm this drug causes.”

“The figures are a credit to our staff who are committed to making New Zealand communities safer,” Mr Bush said.

“In recent years Police have committed significant resources into our Prevention First strategy. This has seen a sharp reduction in reported crime.

A full copy of the statistcs can be viewed at www.police.govt.nz/calendarstats2013

Note on Family Violence Data: These statistics include offences recorded by police in all contexts, whether family violence or not. Since 2011 these statistics have not distinguished between different contexts in which offending occurs, but simply categorised offences according to how they are defined in legislation.

Police are developing a new set of statistics that will include the relationship between victim and offender. This will provide greater insight into the contexts in which crime occurs. For example, we will be able to distinguish crime occurring within families from crime where the victim and offender are acquaintances or strangers. We expect this new information to be available later this year.

For a copy of more Frequently Asked Questions click on this link http://www.police.govt.nz/sites/default/files/publications/crime-stats-calendar-faqs-20131231.pdf